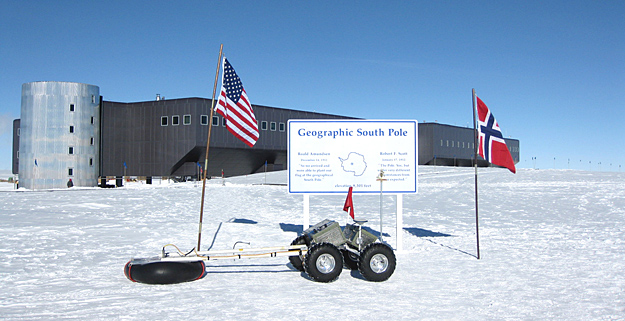 A century after Western explorers first crossed the dangerous landscapes of the Arctic and Antarctic, researchers funded by the National Science Foundation (NSF) have successfully deployed a self-guided robot that uses ground-penetrating radar to map deadly crevasses hidden in ice-covered terrains.

A century after Western explorers first crossed the dangerous landscapes of the Arctic and Antarctic, researchers funded by the National Science Foundation (NSF) have successfully deployed a self-guided robot that uses ground-penetrating radar to map deadly crevasses hidden in ice-covered terrains.

Deployment of the robot–dubbed Yeti–could make Arctic and Antarctic explorations safer by revealing unseen fissures buried beneath ice and snow that could potentially claim human lives and expensive equipment.

Researchers say Yeti opens the door to making polar travel safer for crews that supply remote scientific research stations. Attempts have been made by researchers in the polar regions to use robots for tasks such as searching for meteorites in Antarctica. However, researchers who have worked with Yeti say it is probably the first robot to successfully deploy in the field that is able to identify hazards lurking under the thin cover of snow.

These findings are based on deployments of Yeti in Greenland’s Inland Traverse, an over-ice supply train from Thule in the north of Greenland to NSF’s Summit Station on the ice cap, and in NSF’s South Pole Traverse, a 1,031-mile, over-ice trek from McMurdo Station in Antarctica to the South Pole.

A team of researchers from the U.S. Army’s Cold Regions Research and Engineering Laboratory (CRREL) and the Thayer School of Engineering at Dartmouth College, along with a student at Stanford University’s neuroscience program, recently published their findings in the Journal of Field Robotics.

“Polar exploration is not unlike space missions; we put people into the field where it is expensive and it is dangerous to do science,” said CRREL’s James Lever.

Using Yeti–and potential follow-on devices that Lever expects may be developed in the future by improving on the Yeti template–has value not only in reducing some of the danger to human beings working in polar environments. Deploying Yeti and machines like it also plays to the strength of robots, which are well suited for learning and performing repetitive tasks more efficiently than humans. 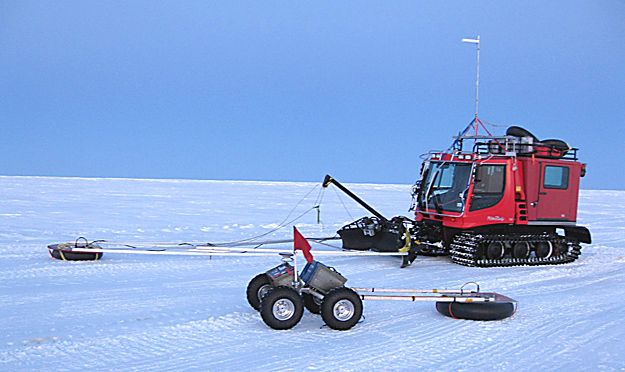 Lever added that robots like Yeti not only improve safety; they also have the potential to reduce the costs of logistical support of science in the remote polar regions and extend the capabilities of researchers.

Yeti was developed with funding from the National Aeronautics and Space Administration’s Jet Propulsion Laboratory.

Students of Lever and Laura Ray, at Dartmouth, also a principal investigator on the Yeti project and a co-author of the paper, designed and created a predecessor to Yeti–called Cool Robot– that was funded by NSF’s Division of Polar Programs to conduct work in Antarctica.

Under a separate NSF grant, researchers plan to deploy Cool Robot this summer to circumnavigate NSF’s Summit Station on the Greenland ice sheet, taking atmospheric samples as it goes. The solar-powered, four-wheel-drive Cool Robot led to Yeti’s success, while helping the researchers meet NSF’s goal of integrating research and education.

“Our focus with Yeti is on improving operational efficiency,” Lever said. “But more generally, robotics has the potential to produce more science with more spatial and temporal coverage for less money. We’re not gong to replace the scientists. But what we can do is extend their reach and add to the science mission.”

Yeti is an 81-kilogram (180-pound) battery powered, four-wheel drive vehicle, about a meter across, that is capable of operating in temperatures as low as -30 Celsius (-20 Fahrenheit). Yeti uses Global Positioning System coordinates to navigate and to plot the position of under-ice hazards.

That work–and the accompanying risks–in the past has fallen exclusively to human crews using ground-penetrating radar to map the under-ice features.

Crevasses often can span widths of 9 meters (30 feet) or more and reach depths of up to 60 meters (200 feet). Snow often accumulates in such a way that it forms unstable bridges over the crevasse, obscuring them from view.

Prior to the development of Yeti, a vehicle pushing a GPR unit would move ahead of a traverse to attempt to detect crevasses. Although the radar was pushed ahead of the vehicle, giving some margin of advanced warning and safety, the system is none-the-less dangerous and stressful for the crews, especially when traversing long distances.

In addition to having the potential to greatly reduce the danger to humans, the Yeti project also has helped advance research into how robots learn, as the research team uses the data gathered by Yeti during hundreds of crevasse encounters to refine algorithms that will allow machines in future to automatically map and avoid crevasses on their own.

Yeti has also proven itself adept at tasks that were not originally envisioned for it.

During the 2012-13 Antarctic research season, Yeti was used to map ice caves on the slopes of Mount Erebus, the world’s southernmost active volcano.

In a deployment that coincided with the 100th anniversary of the arrival of the first explorers at the geographic South Pole in the 2011-2012 research season, Yeti repeatedly and uniformly executed closely spaced survey grids to find known, but inaccurately mapped, buried hazards.

The robot mapped out the long-abandoned original South Pole research station, built in the late 1950s and subsequently buried under the Antarctic ice sheet by years of snowfall and drift. A previous, less refined survey of the site by a human crew had only generally identified the outline of the major buildings. The Yeti-based survey generated a map detailed enough to allow crews to directly access the corners of structures near the ice surface in order to safely demolish them.