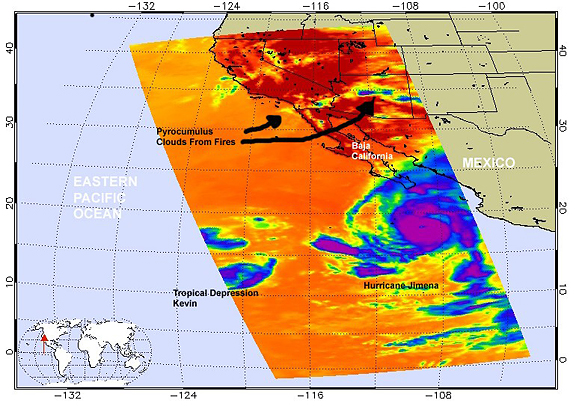 It’s unusual to see towering clouds that are created from smoke and fires, but that’s what showed up in the latest satellite imagery from NASA, when also capturing powerful Hurricane Jimena and Tropical Depression Kevin in the Eastern Pacific Ocean. Jimena’s outer rainbands were already spreading over southern Baja California at 11 a.m. EDT.

“I have never before seen the signature of a pyrocumulus cloud in the infrared channel which I use for hurricane imagery,” said Ed Olsen of the Atmospheric Infrared Sounder (AIRS) Team at NASA’s Jet Propulsion Laboratory, Pasadena, Calif. The pyrocumulus clouds are towering cumulus clouds that were created by the smoke and heat from the California wildfires that are currently burning around Los Angeles. In the AIRS infrared image, they stretch from Los Angeles, Calif. and sweep into Nevada, Arizona and New Mexico between latitude 32 and 36.

The AIRS instrument flies onboard NASA’s Aqua satellite and provides valuable infrared data on cloud top temperatures. They’re important because they tell forecasters how high thunderstorms are in a tropical cyclone. The higher the thunderstorm, the more powerful.

At the same time, an extremely dangerous Hurricane Jimena is approaching Baja California. This is a powerful storm with sustained winds that are a Category Four on the Saffir-Simpson Scale. AIRS revealed very high, cold, powerful thunderstorms in Jimena’s center of circulation, so high that they’re colder than minus 63 degrees Fahrenheit (F). 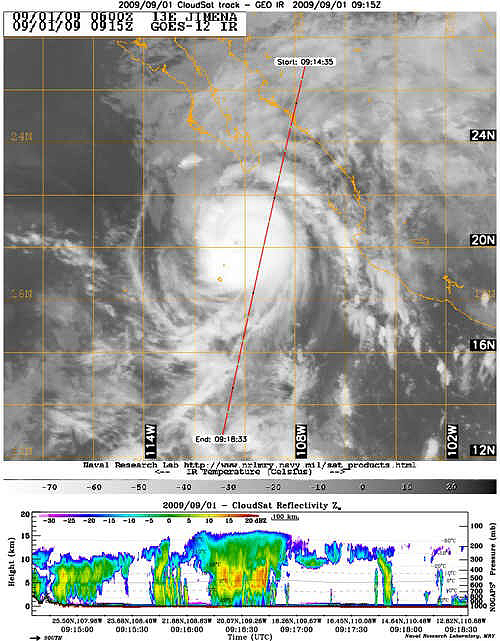 NOAA’s GOES-11 image (top) has a red line showing where CloudSat flew over Jimena and captured a side view of the storm on Sept. 1. The CloudSat image (at the bottom in the larger image link) indicated Jimena’s highest clouds as high as 15 kilometers (9.3 miles), indicating strong convection and a powerful hurricane. Credit: NASA/JPL/Colo.St.Univ./NRL-Monterey

NASA’s CloudSat also flew above Jimena and captured a side view of the storm earlier today. The CloudSat data indicated Jimena’s highest clouds as high as 15 kilometers (9.3 miles), verifying the AIRS data and indicating strong convection and a powerful hurricane.

At 11:00 a.m. EDT (8 a.m. PDT) today, September 1, Jimena has maximum sustained winds near 145 mph, a 10-mile per hour drop from three hours before (Category five is 155 mph sustained winds are greater). Hurricane force winds extend 45 miles from her center, and tropical storm force winds go out up to 140 miles from her center. Her center was located near 20.6* North and 110.4* West, about 140 miles south-southwest of Cabo San Lucas, Mexico. She was moving north-northwest near 12 mph and had a minimum central pressure near 945 millibars, up from 931 millibars three hours ago. That rise in pressure indicates a weakening which was evidenced in her sustained winds dropping 10 mph over that same time. 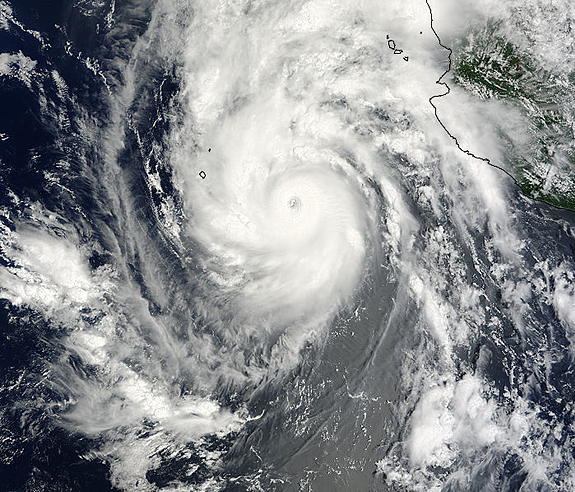 Residents and interests in Baja California and northwestern mainland Mexico should have all their preparations and evacuations done.

Meanwhile, Tropical Depression Kevin appears dazed and confused on satellite imagery and is expected to fade to a remnant low pressure area later today. In fact, NASA’s Tropical Rainfall Measuring Mission (TRMM) satellite showed this morning at 4:44 a.m. EDT that his center of circulation is so elongated that it looks like he has two possible centers of circulation.

Kevin is expected to slowly spin down, as more stable air enters into his circulation. Stable air means thunderstorm formation will slow to a stop and then Kevin will have faded. At 11 a.m. EDT today, September 1, Kevin had sustained winds of 35 mph, but that stable air moving in will weaken him. He’s located in the Eastern Pacific Ocean about 835 miles west-southwest of the southern tip of Baja California, near 18.0 north and 121.7 west. He’s moving north near 3 mph and is expected to slow to a stop where he’ll fade to a remnant low tomorrow. His minimum central pressure was 1008 millibars.