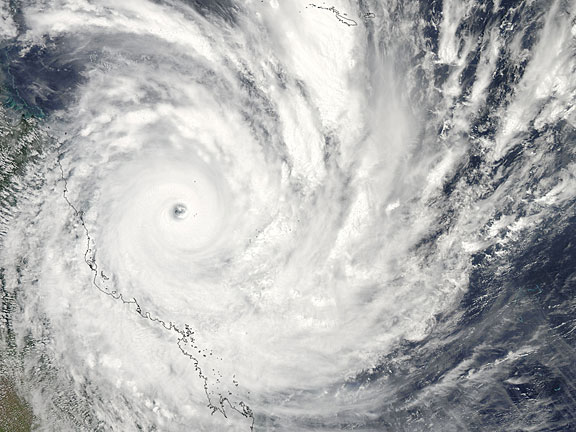 On Feb. 2 at 03:35 UTC/1:35 p.m. Australia local time, the Moderate Resolution Imaging Spectroradiometer (MODIS) instrument on NASA’s Aqua satellite captured a visible image of Cyclone Yasi before it made landfall in Queensland, Australia. The eye of the cyclone was very clear and indicative of the power of this tropical cyclone. Damaged buildings, downed trees and power outages have been reported.

A Cyclone Warning is still in effect today for coastal and island communities from Cooktown to Proserpine, and west inland to the Northern Territory border. The Cyclone Warning was cancelled between Cape Flattery and Cooktown. The Australian Bureau of meteorology warned that flooding rains between Cairns and Proserpine will gradually move inland as Yasi tracks to the west. Flood Warnings are in effect for several rivers between Cairns and MacKay

At 03:29 UTC/1:29 p.m. Australia local time on February 2 (10:29 p.m. EST, Feb. 1), the Atmospheric Infrared Sounder (AIRS) instrument captured an infrared image of Cyclone Yasi as its center was just southeast of Willis Island. The infrared image showed powerful thunderstorms with strong convection and heavy rainfall surrounding a large area around a very clear eye. The temperatures in the cloud tops were as cold as or colder than -63 Fahrenheit (-52 Celsius).

The automated Bureau of Meteorology (BoM) weather station on Willis Island provided amazing data this morning as Cyclone Yasi swept past. Willis Island is located east of Queensland, Australia. Rainfall exceeded 60 mm (2.36 inches) in one hour and pressure had fallen to near 938 millibars. Windspeed peaked at 75 knots (86 mph/138 kmh) before the equipment stopped working.

As Yasi made landfall and swept inland, Cairns, located to the north of Townsville, recorded a low reading of atmospheric pressure near 983 millibars. Rainfall was 16 mm (0.6 inch) in one hour, and maximum sustained winds were recorded as high as 34 knots (39 mph/63 kmh).

Lucinda, which is south of Cairns, and north of Townsville recorded a low atmospheric pressure of around 977 millibars. Rainfall totals in one hour were recorded near 27 mm (1.06 inch) and maximum sustained winds were recorded near 73 knots (84 mph/135 kmh).

At 3 a.m. local time, the center of Severe Tropical Cyclone Yasi had moved inland and was located near 18.1 South and 145.4 East. It was moving west-southwest near 33 kmh (20 mph) and had a minimum central pressure of 941 millibars. The storm is forecast to weaken and dissipate within 48 hours.