The European Space Agency provided and early morning update on the Rosetta mission discussing primarily the science results. Since the last update yesterday, ESA has decided not to fire the anchor harpoons which were need to secure the Philae lander on the surface on the comet.
As well, drilling did start successfully even though the lander isn’t secured. Data was received by the Rosetta orbiter. The Alpha Proton X-ray Spectrometer (APXS) was also started and began chemical analysis of the landing site.

Currently telemetry from the lander has stopped and will not resume until 3:00 p.m. EST (2100 GMT) though it may be an hour afterwards before the data is received. ESA is not sure there will be enough power for the lander to communicate again. By drilling they may have used the last of the landers power. The ESA team would like to “bounce” out of their current position but that seems unlikely. 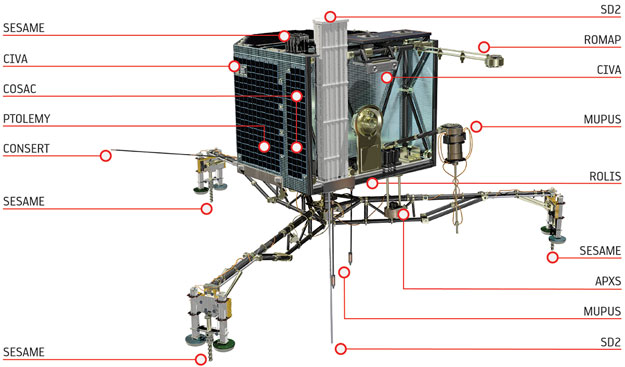 The Philae lander has 10 instruments:

– APXS: Alpha Proton X-ray Spectrometer (studying the chemical composition of the landing site and its potential alteration during the comet’s approach to the Sun)

– PTOLEMY: Using MODULUS protocol (Methods Of Determining and Understanding Light elements from Unequivocal Stable isotope compositions) to understand the geochemistry of light elements, such as hydrogen, carbon, nitrogen and oxygen.

– MUPUS: MUlti-PUrpose Sensors for Surface and Sub-Surface Science (studying the properties of the comet surface and immediate sub-surface)

– SD2: Sampling, drilling and distribution subsystem (drilling up to 23 cm depth and delivering material to onboard instruments for analysis)

Backgrounder: Philae’s Descent and Science on the Surface Animation