Using a Tricorder on Mount Everest 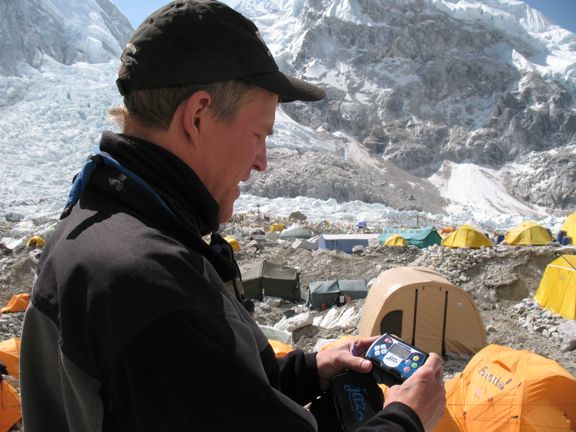 Keith Cowing: If you’ve ever seen a Starfleet away team beaming down to a new planet, you know that the first thing they do is whip out their tricorder and scan everything. They then promptly tell their commander what sort of life forms, geology, atmosphere, etc. surrounds them.

I have always wanted a tricorder. So have many of NASA’s astrobiologists.

Keith Cowing: If you’ve ever seen a Starfleet away team beaming down to a new planet, you know that the first thing they do is whip out their tricorder and scan everything. They then promptly tell their commander what sort of life forms, geology, atmosphere, etc. surrounds them.

I have always wanted a tricorder. So have many of NASA’s astrobiologists.

Well, Scott and I have one. It is somewhat large – somewhat like the one Spock used. And while it cannot do everything that you see Tricorders doing in Star Trek, it can do quite a lot. 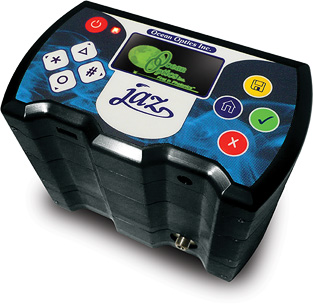 With us here at Everest Base Camp have a Jaz spectroradiometer kindly provided to us by Ocean Optics. We are using this interesting little device to measure solar irradiance i.e. the nature of sunlight with a focus on ultraviolet (UV) levels. At extreme altitude such as what we experience in the Everest region, UV levels can be exceptionally high. NASA satellites suggest that UV levels should be among the highest on Earth. Jaz has a computer inside that processes the data and stores it on a SD card.

This unit is being provided to us by Dr. Lynn Rothschild at NASA Ames Research Center. Lynn is one of those astrobiologists who will happily get tired and dirty in pursuit of samples of life in very strange places from Boliva to Kenya. This includes hot stinky springs at Yellowstone and other extreme and hazardous environments. She jumped at the chance to have us do some data collection at Everest. Indeed, she’d be here with us if she could!

But why measure this? One of the factors affecting the production, maintenance, and evolution of life on Earth has to do with the ability of genetic information (in the form of DNA and RNA) to be maintained and repaired. One of the most common ways for DNA to be damaged is via irradiation (which is why you should be covering yourself with sunblock in the Summer). UV light from the sun can have a potent effect upon DNA. How organisms protect their DNA and repair it when it is damaged affects not only the health of an individual organism but also the ability to propagate the species.

The more intense the UV the more important both protection and repair become. Characterizing extreme environments as to the nature of solar irradiation and the effect it can have on DNA is crucial to gaining an understanding of life’s limits on Earth – and also understanding what life may encounter on other worlds. In addition, early Earth would likely have had much higher UV levels due to the fact that life first arose before Earth’s the ozone layer (which blocks a lot of UV) had formed.

So how do we go about doing this? Two ways. First, we need to make measurements of the UV levels at Everest Base Camp and at locations further up the mountain. How high we go will depend on Scott’s schedule and his ability to actually use the unit when things get cold and difficult. While the use of the unit is straight forward, it does require some concentration and dexterity – things that come in increasingly short supply as one ascends.

But measuring UV levels is only part of the story. You can use calculations and lab experiments and model what might happen to DNA when exposed in the real world or, preferably, you can take DNA to the actual locations and measure what effect the actual UV levels have. Nothing beats the real thing.

To do this, we use a standard DNA plasmid. A plasmid is a strand of DNA separate from the DNA that forms bacterial chromosomes and is capable of replicating itself independently of the chromosomal DNA. This plasmid is in a solution of glycerol so as to make certain that it does not freeze.

We have a series of small sample vials containing this solution with the plasmids. We put out some small plastic dishes on a flat surface, open the vials, and use a eye dropper like device to put the solution in the dishes. We then let it sit there, exposed to the sun for several hours. The solution is then put back in the vials, sealed, and brought back to NASA.

Taken together, our measurements of what the sun is doing and how the DNA in these plasmids responds to that irradiation, will give Lynn an idea as to what damage – if any – is occurring. Again if we can understand what happens in this situation where DNA is being hammered by high UV levels, then we have an idea as to how life might have responded to extreme conditions on early Earth – or, if DNA forms the basis of extraterrestrial life, how life elsewhere might respond.

We have already managed to get preliminary data back to Lynn from locations on the way to – and at – Everest Base Camp and will be sending additional data taken from higher up on the mountain itself. We may also post some of Lynn’s initial observations based on this preliminary data.

Below is the text of a short interview that Miles O’Brien conducted with Lynn Rothschild in March 2009 when Miles, Scott Parazynski, and Keith Cowing visited Lynn in her laboratory at NASA Ames Research Center. 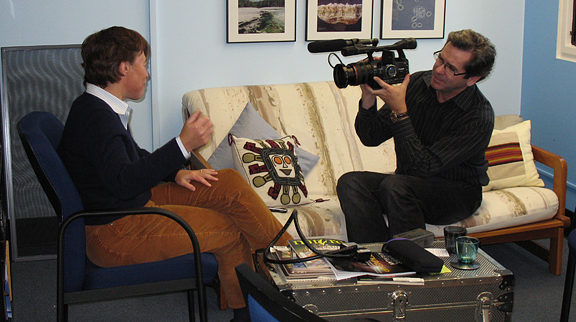 Miles O’Brien: I’m here with Dr. Lynn Rothschild at NASA Ames Research Center. She’s a research scientist and also the self-proclaimed “Chief of Extremophiles” here. OK – what what can you learn from studying these extremophile organisms?

Lynn Rothschild: There many things you learn. The immediate and obvious thing is that you are hitting the highest altitude on the Earth and so you are doing a transect up from the surface. We now know so much about the oceans and the bottom of the oceans. We actually know less going up vertically above the Earth’s surface. As you go up you have differences in the biological communities that you find. You are going to have differences in the physical environment and therefore the differences in the physical environment are going to affect the biological community.

Miles O’Brien: So, with that in mind, specifically what do you ask yourself to do?

Lynn Rothschild: What I would like Scott to do is measure solar radiation on Mt. Everest. In other words, how much of the sun reaches them at the different altitude Scott is going to. Then, we need to see what this solar radiation might be doing to an organism. They will be bringing bringing a spectroradiometer, some DNA samples to expose to the sun at these different altitudes.

Lynn Rothschild: It will give us some idea of how solar radiation at these heights might be able to circumscribe life. What’s particularly interesting for us is that the early Earth would have had a much higher UV flux. Mars would have a much higher UV flux. So it might provide, in fact, the best model environment for looking at the UV effects for a potential biota on Mars or even the early Earth.

Miles O’Brien: So in essence it is, sort of, like walking back in time.

Lynn Rothschild: Yes! We are sending Scott back a couple of billion years!

Miles O’Brien: What’s your gut hypothesis on this?

Lynn Rothschild: Scott and I have done some work up in the Altiplano – the high mountains in Bolivia. We have certainly seen much higher levels of ultraviolet radiation there. So, I would expect this would be the same in space. I am hoping we get even higher levels that we can then correlate in to these lower levels and really push the boundaries and see what the highest limits are for life on Earth.

Miles O’Brien: So, in other words, if you find these high levels of UV and you know there is life up there that tells you something about hardiness of life?

Lynn Rothschild: Oh, absolutely! It tells us that when we find a situation like that either on the Earth or potentially elsewhere in our solar system or beyond, that there is nothing about that physical environment per se that precludes life. That’s a very big statement for a biologist.

Miles O’Brien: This cuts right to the correlation as you look for life on other planets it has survived to finds the boundaries of life on this planet.

Lynn Rothschild: Absolutely! We only have one data point at this point and that’s life on Earth. So the more we can learn about the boundaries of life on Earth, the better we understand the potential for life elsewhere.

Miles O’Brien: So Scott then said he was going to have another shot at Everest you jumped all over this stuff.