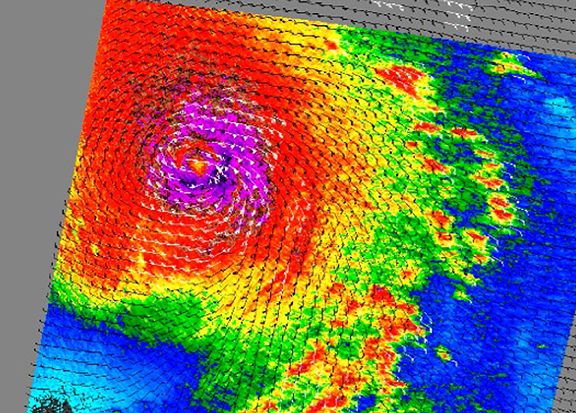 QuikScat used microwaves to peer through Bill’s clouds and measure his winds on August 18 at 5:23 p.m. EDT when Bill was a powerful Category 4 hurricane. Credit: NASA JPL, Peter Falcon

QuikScat used microwaves to peer through Bill’s clouds and measure his winds on August 18 at 5:23 p.m. EDT when Bill was a powerful Category 4 hurricane. Credit: NASA JPL, Peter Falcon

NASA satellites continue to capture important wind speed and cloud data that forecasters at the National Hurricane Center are using to help their forecasts. QuikScat has been particularly helpful in determining the extent of hurricane and tropical storm-force winds, and they go a great distance.

NASA’s QuikScat satellite uses microwave technology to peer through the clouds and measure the surface winds of a tropical cyclone. On Thursday, August 19, QuikScat data found that Bill’s hurricane force winds have dropped down to a Category 3 hurricane at 125 mph. However, forecasters note that Bill is moving into an area that could help him strengthen back to Category 4 hurricane on Friday or Saturday. 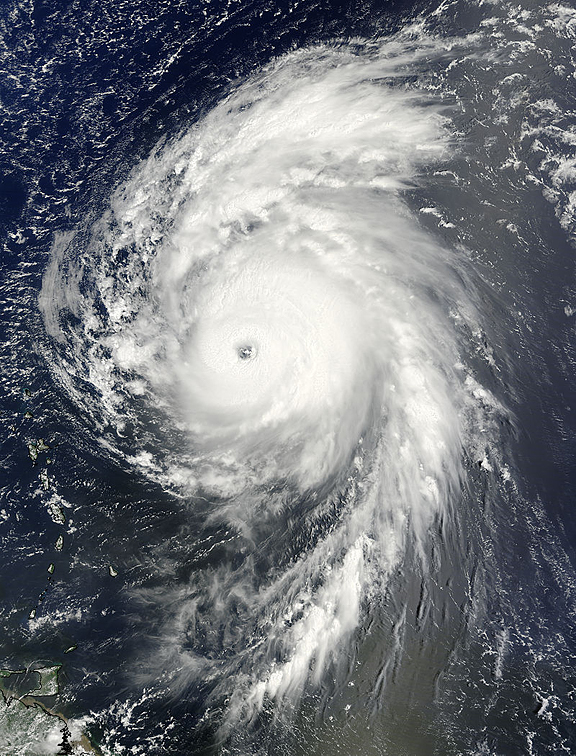 At 5 a.m. EDT on August 19, Bill’s maximum sustained winds had decreased to 125 mph, and he was moving northwest near 18 mph. That motion is expected to continue for a day until he turns to the north-northwest late Friday. Minimum central pressure was 949 millibars. Bill was located about 790 miles south-southeast of Bermuda and only 325 miles north-northeast of the Leeward Islands.

NASA’s Terra satellite also flew over Bill, and using the Moderate Imaging Spectroradiometer (MODIS) instrument captured an image of the storm when it was located off the Lesser Antilles in the Atlantic Ocean on August 19 at 12:15 p.m. EDT. MODIS showed a strong hurricane with a well-defined eye.

Hurricane Bill is hundreds of miles away from the U.S. coast today, but forecasters are cautioning about large swells the storm is creating already.

The National Hurricane Center noted that “Large swells associated with bill will be impacting the islands of the northeast Caribbean Sea, the Bahamas and Bermuda during the next day or two.” Meanwhile, residents along the east coast of the U.S. should be on watch, starting Friday and over the weekend, as large swells will begin to affect areas of the coast. Rip tides may also be possible, so beachgoers and boaters should be aware of the hazardous conditions Bill will create along the coasts this weekend.

The National Hurricane Center in Miami, Fla. is forecasting Bill to pass to the west of Bermuda and then track parallel to the U.S. east coast over the weekend, stirring up the ocean. 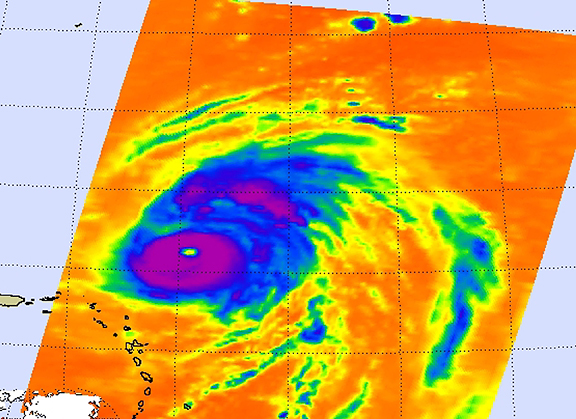 NASA’s AIRS instrument on the Aqua satellite caught Bill’s icy cold clouds on August 20 at 1:29 a.m. EDT as it was moving toward the Leeward Islands (left of the storm). Notice Bill’s 30 mile wide eye is well-defined in the center of the storm. In this false-colored image, purple indicates Bill’s high thunderstorm cloud temperatures are colder than minus 63F and blue is minus 27F or colder. Credit: NASA JPL, Ed Olsen