TODAY: Challenger Center and Quest For Stars Chase Attempt to Photograph Discovery At The Edge of Space 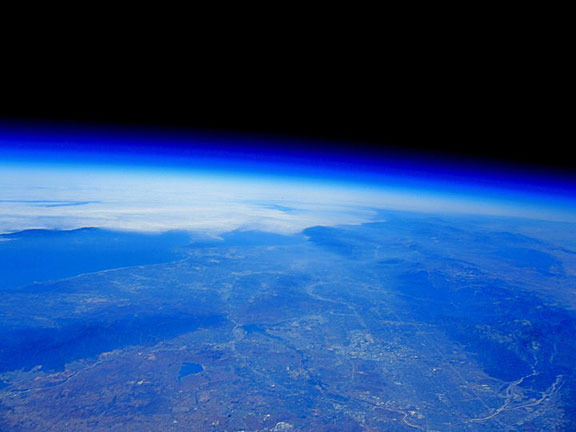 The LA Basin from the Edge of Space during August 2010 Launch. Credit: Quest for Stars

If all goes according to plan a balloon with a student-oriented payload will photograph Space Shuttle Discovery as it climbs into space from an altitude of 100,000 feet. There will also be live streaming video from the balloon itself during the mission – sent back by two regular smartphones running Google’s Android operating system.

The LA Basin from the Edge of Space during August 2010 Launch. Credit: Quest for Stars

If all goes according to plan a balloon with a student-oriented payload will photograph Space Shuttle Discovery as it climbs into space from an altitude of 100,000 feet. There will also be live streaming video from the balloon itself during the mission – sent back by two regular smartphones running Google’s Android operating system.

Co-sponsored by the Challenger Center for Space Science Education, this mission is one in a series of flights conducted by Quest for Stars, a California-based non-profit educational organization that uses off-the-shelf hardware and a little ingenuity to allow students to place experiments at the edge of space at exceptionally low cost.

Quest for Stars and the Challenger Center for Space Science Education have now joined together to promote the use of these low cost delivery systems. This mission will be the first of what is hoped to be many future collaborations.

A helium-filled balloon carrying the “Robonaut-1” payload will be launched from a location in Florida some distance away from Kennedy Space Center. The time and location of launch will be determined by weather conditions. With a currently planned STS-133 launch time of 4:50 p.m. EST the balloon will be launched between 3:00 – 3:50 p.m. EST so as to be in position for Discovery’s supersonic transit of the stratosphere. If there is a delay in the launch of Discovery the team is ready to try again – several times – on subsequent days.

The balloon will rise at a rate of 800-1,000 feet per minute to an altitude of approximately 100,000 feet. After accomplishing its mission the payload will be released and descend by parachute. After the payload descends for 15-30 minutes, a trained recovery team will retrieve the payload and download its data and imagery.

Onboard Robonaut-1 is a HD Camera Phone Satellite (PHONESAT) that will attempt to capture images of Space Shuttle Discovery as it leaves Earth for space. Multiple cameras and an on-board computer system will ensure that Discovery launch images will be captured during its ascent. Some of those photos will include logos for Quest For Stars, STS-133, Challenger Center, and Motorola. In addition, the payload contains a Motorola i290 mobile phone and a Garmin eTrex GPS system that is connected to a ham radio transmitter. The payload is designed to have multiple means of communication for backup purposes.

Live video of mission activities will also be streamed during the mission. This webcast can be watched at http://www.ustream.tv/channel/chasing-discovery , http://www.challenger.org/live , and at http://onorbit.com/suborbital

Live video from the Robonaut-1 itself during flight will be available at http://qik.com/robonaut-1

Updates during the mission including live tracking information during ascent and descent can be obtained by following http://twitter.com/questforstars or on Facebook at http://tinyurl.com/4hu4337

A report on this balloon mission will be provided by Quest for Stars’ representative Bobby Russell at the Next-Generation Suborbital Researchers Conference (NSRC) in Orlando, FL. Russell will speak at on Tuesday, March 2nd at 8:15 a.m. EST. More information on this conference can be found at http://nsrc.swri.org

About Quest for Stars

Quest for Stars is a nonprofit organization that works in partnership with high schools and middle schools to bring the excitement of sending small payloads to the edge of space on high altitude balloons and then retrieving them. Quest for Stars encourages children and young adults to reach for the stars by exposure to STEM (science, technology, engineering, and mathematics) educational concepts and their application to space research. The organization works with partners such as the Motorola Foundation and The Challenger Center for Space Science Education to bring space access down to Earth. The shared mission: to inspire the next generation of explorers.

Once retrieved the payload bay is donated to a school along with pictures in High Definition at the edge of space. This allows the students to be part of the design and launch of the payload–which is an experience they will never forget. All materials, time, and effort are provided to the selected school at absolutely no cost. Quest for stars provides all materials and FAA interfacing required to launch weather balloons into the stratosphere. Their staff consists of private pilots, electronic experts, and mechanical engineers who ensure that launch vehicles meet all federal regulations. For more information visit http://www.questforstars.com

Using space exploration as a theme and simulations as a vehicle, Challenger Center for Space Science Education and its international network of 48 Challenger Learning Centers create positive educational experiences that raise students’ expectations of success, fosters a long-term interest in science, technology, engineering, and mathematics (STEM), and inspires students to pursue studies and careers in these areas. Challenger Center’s network of Challenger Learning Centers across the United States, Canada, the United Kingdom, and South Korea reach more than 400,000 students each year through simulated space missions and educational programs, and engage over 40,000 educators through missions, teacher workshops and other programs.

In addition to its Learning Center activities, Challenger Center personnel and associates have participated in missions of exploration in recent years that have included journeys to the International Space Station, Devon Island in the Canadian high arctic, Mt. Everest, Antarctica, and NASA Desert RATS. To learn more about Challenger Center for Space Science Education, visit http://www.challenger.org 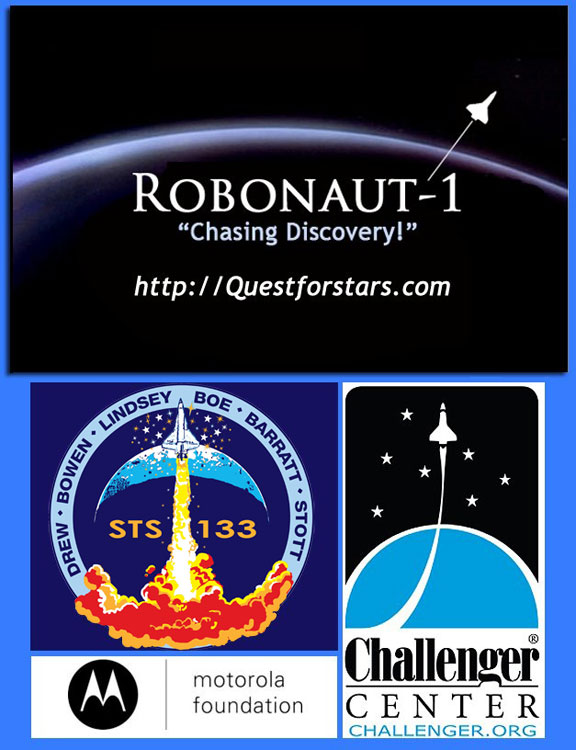 The Mission Patch for Robonaut-1’s flight. This will be displayed on board infront of HD video camera #2. Credit: Quest for Stars 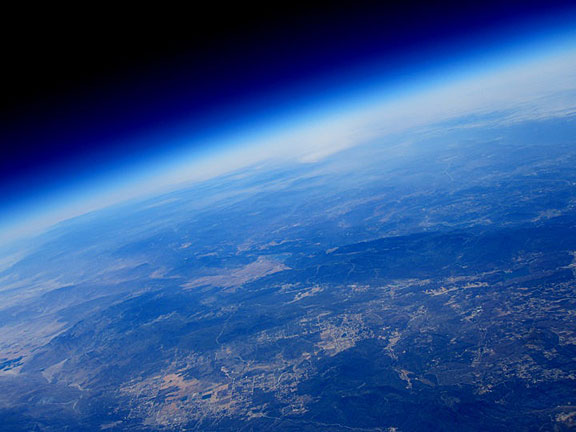 August 2010 Launch site Warner Springs Gliderport is in the middle of this shot from the edge of space. Credit: Quest for Stars 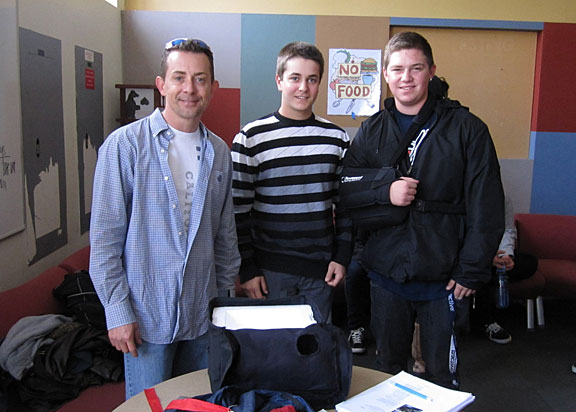 (L to R Bobby) Russell (Quest for Stars) Grant Garrity and Max Wasserman from High Tech High. They have taken on the challenge of improving our payload design. They will be focusing on making the avionics packages waterproof. Credit: Quest for Stars 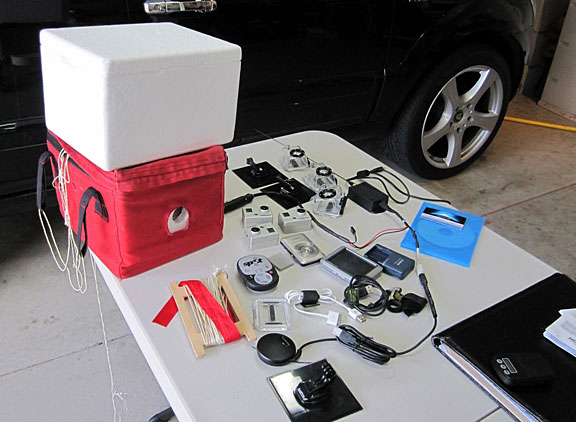 Payload being prepared for flight. Credit: Quest for Stars 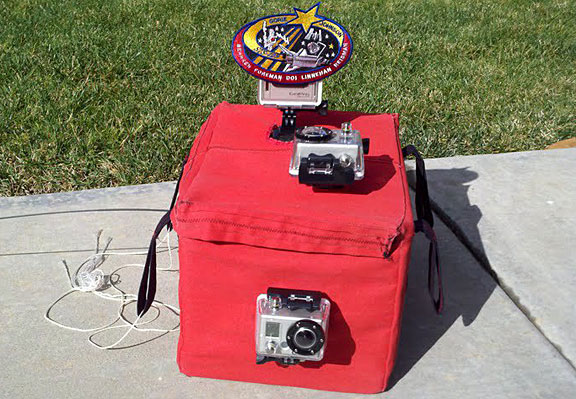 PS: Our mission patch is not here yet–so we used STS-123’s mission patch to show where it will be during flight. Credit: Quest for Stars 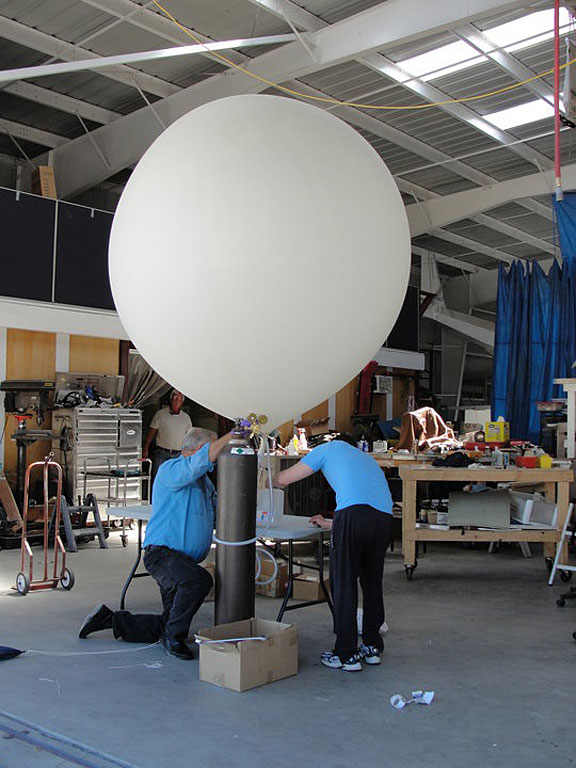 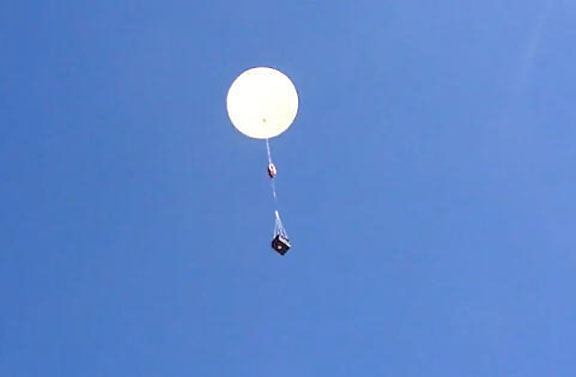