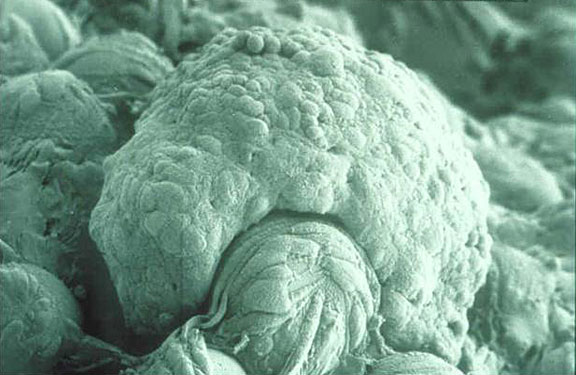 Figure 1, An artificially produced colon cancer tumor produced under emulated microgravity on Earth is composed of millions of cancerous cells forming a 3-D configuration, much like that which would form in the human body. Work conducted at NASA in collaboration with Dr. Kim Jessup. (Image courtesy of Dr. David Wolf)

This week, comments from guest blogger, medical doctor, engineer, and astronaut, Dr. David Wolf, as he reflects on tissue engineering in space.

Figure 1, An artificially produced colon cancer tumor produced under emulated microgravity on Earth is composed of millions of cancerous cells forming a 3-D configuration, much like that which would form in the human body. Work conducted at NASA in collaboration with Dr. Kim Jessup. (Image courtesy of Dr. David Wolf)

This week, comments from guest blogger, medical doctor, engineer, and astronaut, Dr. David Wolf, as he reflects on tissue engineering in space.

The International Space Station National Laboratory has an edge for doing unique experiments in medicine and biotechnology that are not possible anywhere else–we can “turn off” gravity. As we gear up to fully use the station, the emerging field of tissue engineering is one of our high-value targets. This is a particularly promising area of study where microgravity research has already made advances in basic science. Indications are that further work will lead to important applications in clinical medicine on Earth.

Building on the groundwork from earlier programs, biotechnology research on the space station, and associated ground-based research in emulated microgravity, has created a large body of information. This data collection demonstrates the value of controlled gravity systems for assembling and growing 3-Dimensional living tissue from individual cells and substrates. The NASA-developed Space Bioreactor provides a core in-vitro capability both in space and on Earth. 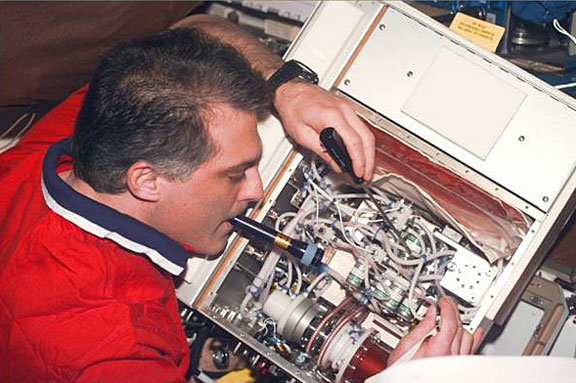 Dr. Wolf, on Space Station Mir, repairing a faulty valve in the Space Bioreactor, an instrument for precisely controlling the conditions enabling the culture of 3-D human tissues in microgravity. (NASA image)

On Earth, these bioreactors are unique in that they are able to emulate, within limits, the far superior fluid mechanical conditions achieved in space. One may think of this Space Bioreactor as a 3-D petri plate. The core of the instrumentation is a rotating fluid filled cylinder, the culture vessel, producing conditions inside resembling the buoyancy found within the womb. And much like in the human body, this vessel is surrounded by a life support system performing the functions of the heart and lung, achieving the precisely controlled conditions necessary for healthy tissue growth. The importance of this culture technique is that fluid mechanical conditions obtained in microgravity–and emulated on Earth–allow the growth of tissues in the laboratory that cannot be grown any other way. Emulated microgravity on Earth, and to a much greater degree, the actual microgravity of spaceflight enable an extremely gentle and quiescent fluid dynamic environment. The cells and substrates are free to organize into 3-D tissues without the need to introduce disruptive suspension forces from blades or stirring mechanisms. This leads to a broad array of applications based on enhanced in-vitro tissue culture techniques.

The ground-based versions of the Space Bioreactor produced very high fidelity colon tumors for cancer research, providing strong indications of the value of actual microgravity, see Figure 1. Even so, when I first put space grown tissue samples under the microscope, while aboard the Space Station Mir, I was astounded! In my many years of experience culturing tissues, I had never seen any so well organized, so healthy, and with such fine structure. Nerve derived tissue from the adrenal gland was forming long fronds of exceptionally delicate tissue, see Figure 2. What I was seeing could never form on Earth, even in our state-of-the-art systems that emulate microgravity. 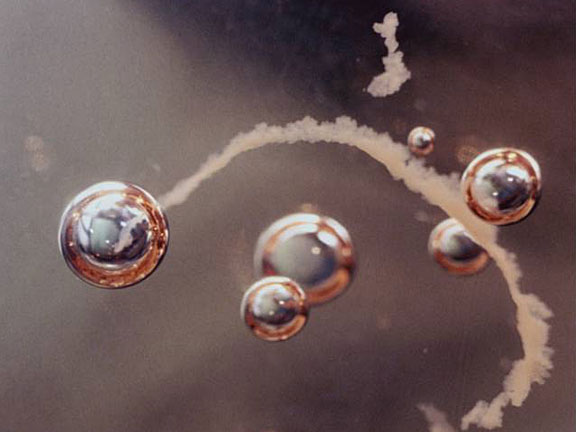 NASA research in the Space Bioreactors produced over 25 U.S. patents and the technology is considered state-of-the-art for ground-based tissue culture. Scientists around the globe from the National Institutes of Health or NIH, medical centers, and universities have produced numerous peer reviewed publications in highly respected journals and even more patents based on the fundamental principles. Other actual spaceflight research has been successfully used to study breast cancer and prostate cancer. NASA has licensed its patents to spin-off companies including Synthecon, Inc., for commercial manufacturing of the equipment, and Regenetech, Inc., for regenerative medicine and stem cell applications. These companies have in turn sublicensed the technology even more broadly, enabling widespread use of this NASA-developed technology.

Researchers on Earth use this technology to study cancer, stem cells, diabetes, cartilage growth, nerve growth, skin, kidney, liver, heart, blood vessels, infectious disease–virtually every tissue in the body. The applications go much further than engineering implantable tissue, to include vaccine production and living ex-vivo organic life support systems, such as artificial livers. Researchers at the NIH, for instance, used the methods to propagate the HIV virus, responsible for AIDS, in artificial lymph node tissue–itself sustained in the bioreactor. This resulted in the ability to study the virus life cycle under controlled conditions, outside the human body.

But we are not done. While very capable on Earth, the performance of Earth-bound bioreactors is still limited by the presence of gravity. Spaceflight testing on Mir and the space shuttle demonstrate that the growth of larger, better functioning, and more organized tissue may be obtained under true low gravity conditions. To date, the Space Bioreactor has been exploited primarily for basic research. During the intervening time, the field of medicine has evolved a firm vision towards true regenerative tissue technology. In recent years, powerful molecular biology techniques provided a detailed biological knowledge, which permits understanding cellular machinery almost like micro-machines. This convergence of technology with the space station laboratory opens a new chapter for space biotechnology.

The International Space Station National Laboratory now provides an unprecedented opportunity to the biotechnology community. Within NASA, scientists continue to work to build the infrastructure to enable the biotechnology community; to help them take the next steps in exploiting controlled gravity in-vitro systems. The vision is to team together the very best minds and institutions, leveraging their abilities to advance regenerative medicine. Such advances can lead to improving our quality of life on Earth and serve as a lasting legacy of the space station era.

Dr. David Wolf is an astronaut, medical doctor, and electrical engineer. Having traveled to space four times, Dr. Wolf participated in three short-duration space shuttle missions and a long-duration mission to the Russian Space Station Mir. A native of Indianapolis, he participated in seven spacewalks, and the SLS-2 Life Sciences Spacelab Mission, logging over 4,040 hours in space. He received the NASA Exceptional Engineering Achievement Medal, the NASA Inventor of the Year Award, among multiple recognitions for his work in advancing 3-D tissue engineering technology.