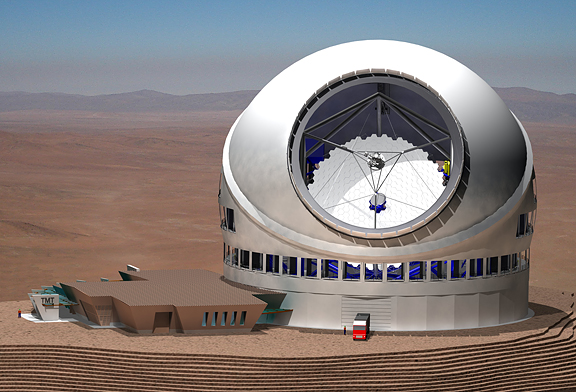 PASADENA, Calif. — After careful evaluation and comparison between two outstanding candidate sites–Mauna Kea in Hawai’i and Cerro Armazones in Chile–the board of directors of the TMT Observatory Corporation has selected Mauna Kea as the preferred site for the Thirty Meter Telescope. The TMT will be the most capable and advanced telescope ever constructed.

PASADENA, Calif. — After careful evaluation and comparison between two outstanding candidate sites–Mauna Kea in Hawai’i and Cerro Armazones in Chile–the board of directors of the TMT Observatory Corporation has selected Mauna Kea as the preferred site for the Thirty Meter Telescope. The TMT will be the most capable and advanced telescope ever constructed.

When completed in 2018, the TMT will enable astronomers to detect and study light from the earliest stars and galaxies, analyze the formation of planets around nearby stars, and test many of the fundamental laws of physics.

To achieve these outstanding results, the TMT will integrate the latest innovations in precision control, segmented mirror design, and adaptive optics to correct for the blurring effect of Earth’s atmosphere, enabling the TMT to study the Universe as clearly as if the telescope were in space. Building on the success of the twin Keck telescopes, the core technology of TMT will be a 30-meter primary mirror composed of 492 segments. This will give TMT nine times the collecting area of today’s largest optical telescopes.

To ensure that the site chosen for TMT would enable the telescope to achieve its full potential, a global satellite survey was conducted, from which five outstanding candidate sites were chosen for further ground-based studies of atmospheric stability, wind patterns, temperature variation, and other meteorological characteristics that would affect the performance of the telescope.

Based on these results and extensive studies, Mauna Kea and Cerro Armazones were selected in May 2008 for further evaluation and environmental, financial, and cultural impact studies. The TMT board used the results from these meticulous research campaigns to help guide the final site-selection process.

“It was clear from all the information we received that both sites were among the best in the world for astronomical research,” said Edward Stone, Caltech’s Morrisroe Professor of Physics and vice chairman of the TMT board. “Each has superb observing conditions and would enable TMT to achieve its full potential of unlocking the mysteries of the Universe.”

“In the final analysis, the board selected Mauna Kea as the site for TMT. The atmospheric conditions, low average temperatures, and very low humidity will open an exciting new discovery space using adaptive optics and infrared observations. Working in concert with the partners’ existing facilities on Mauna Kea will further expand the opportunities for discoveries,” said Stone.

Henry Yang, TMT board chair and chancellor of the University of California at Santa Barbara, expressed excitement at this decision. “Our scientists and engineers have been designing and building the key components that will go into the telescope. By deciding to build on Mauna Kea, the TMT board has given a clear signal that we are ready to move forward and begin building in earnest as soon as all the necessary approvals are in place. I want to thank the Moore Foundation for its visionary support. I also want to thank our scientific colleagues and the coalition of community members, educators, businesses, unions, political leaders, and stakeholders in Hawai’i who have brought us to the point of this site selection. The board expresses a strong commitment to respect the long history and cultural significance of Mauna Kea to the Hawaiian people, and has committed annual funding for local community benefits and education in Hawai’i.”

Before construction can begin on Mauna Kea, the TMT must submit and have approved an application for a Conservation District Use Permit (CDUP) to the Hawaiian Department of Land and Natural Resources. This will be done through the community-based Office of Mauna Kea Management, which oversees the Mauna Kea summit as part of the University of Hawai’i at Hilo.

“We are very grateful for the support that TMT has received from both the people and governments of Hawai’i and Chile during the site-selection process,” said Professor Ray Carlberg, the Canadian Large Optical Telescope project director and a TMT board member. “We are excited about the prospect of being the first of the next generation of extremely large telescopes.”

The TMT project is an international partnership among the California Institute of Technology, the University of California, and ACURA, an organization of Canadian universities. The National Astronomical Observatory of Japan (NAOJ) joined TMT as a Collaborating Institution in 2008.

“The selection of Hawai’i as the site for the Thirty Meter Telescope will greatly strengthen international cooperation in astronomy. The synergy between TMT and the highly successful Subaru Telescope already on Mauna Kea will lead to many further research breakthroughs,” said Professor Masanori Iye, the Extremely Large Telescope Project Director of the NAOJ.

The TMT project has completed its $77 million design development phase with primary financial support of $50 million from the Gordon and Betty Moore Foundation and $22 million from Canada. The project has now entered the early construction phase thanks to an additional $200 million pledge from the Gordon and Betty Moore Foundation. Caltech and the University of California each have agreed to raise matching funds of $50 million to bring the construction total to $300 million, and the Canadian partners propose to supply the enclosure, the telescope structure, and the first light adaptive optics.