Thinking Of Sir Arthur C. Clarke On His 100th Birthday

Today would have been Sir Arthur C. Clarke’s 100th birthday. Arthur C. Clarke has had more influence on me as a writer than just about anyone else has – and it started at a very early age.
In 1998 I was working as a NASA contractor in Washington, DC. my friend and collaborator Mitch Hobish was travelling to Sri Lanka to do some computer system requests at the request of his mentor Cyril Ponnamperuma. Ponnamperuma was a long time associate of Arthur C. Clarke. While there Mitch had hoped to meet Clarke – so I gave him a letter of introduction and the old ragged paperback that I had first read in 1968 – and re-read many times since. In that letter I promised that when (not if) I flew in space that this old paperback would be in my pocket.

As it happened while Mitch was in Sri Lanka, Clarke was in the U.S. for his annual physical at Johns Hopkins. So the book was sent back to Sri Lanka where Clarke signed it and somehow it got back to Mitch and then to me. The book made two trips from the U.S. to Sri Lanka as best as I can tell.

It was signed “To Keith Cowing: Hope you make it into space – Best Wishes Arthur C.Clarke”

In the early 1990s I was a NASA employee and served as Payload Accommodations Manager for the 2.5 meter Centrifuge Facility that we planned to attach to Space Station Freedom (you call it ISS now). Eventually it was dropped by the program. At every possible opportunity I would sneak in gag charts showing the crew of Discovery from the film “2001: A Space Odyssey” inside the “25 meter centrifuge” and then say “oops, wrong chart”. 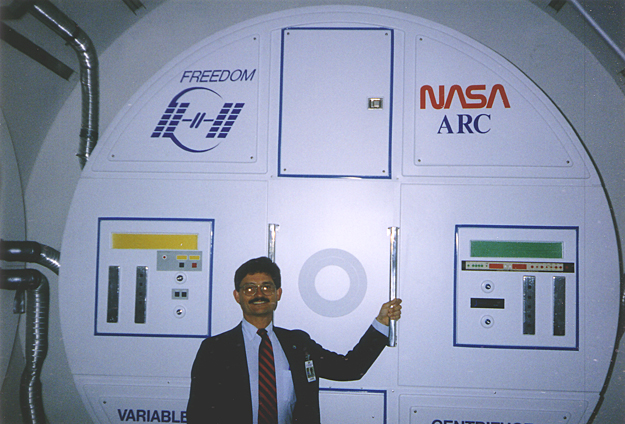 When I lived at Everest Base Camp for a month in 2009 I had an electronic version of the book with me on my iPhone. I also carried in my pocket when I had suborbital scientist astronaut training in a centrifuge at NASTAR and when I did several weightless parabolic flights on ZeroG Corporation’s aircraft. I am not a big autograph collector – with one exception. In the ensuing years I managed to get actor Keir Dullea and Clarke collaborators Fred Ordway and Frederick Durant to sign this old paperback as well.

In 2002 my business partner Marc Boucher and I donated and constructed a greenhouse on Devon Island that we called the “Arthur Clarke Mars Greenhouse.” In 1998 Marc had a chance to visit with Clarke at his home in Sri Lanka where they talked about space elevators- one of Marc’s favorite topics. The greenhouse was inspired in part by the film “Silent Running” made by Douglas Trumbull, the special effects supervisor for “2001”. A few years ago I showed him a picture of the greenhouse on my iPhone and he smiled. I also told him that the graphics inside the NASTAR suborbital trainer were eerily similar to the earth orbit scenes from “2001” and that I doubted that this was not purely coincidental.

I’m not certain if I will ever actually fly into space since that is going to be an expensive trip for may years to come that will always be beyond my means. But If I do fly ….