ESO’s Very Large Telescope (VLT) has captured a remarkably detailed image of the Toby Jug Nebula, a cloud of gas and dust surrounding a red giant star. This view shows the characteristic arcing structure of the nebula, which, true to its name, does indeed look a little like a jug with a handle.
Located about 1200 light-years from Earth in the southern constellation of Carina (The Ship’s Keel), the Toby Jug Nebula, more formally known as IC 2220, is an example of a reflection nebula. It is a cloud of gas and dust illuminated from within by a star called HD 65750. This star, a type known as a red giant, has five times the mass of our Sun but it is in a much more advanced stage of its life, despite its comparatively young age of around 50 million years [1].

The nebula was created by the star, which is losing part of its mass out into the surrounding space, forming a cloud of gas and dust as the material cools. The dust consists of elements such as carbon and simple, heat-resistant compounds such as titanium dioxide and calcium oxide (lime). In this case, detailed studies of the object in infrared light point to silicon dioxide (silica) being the most likely compound reflecting the star’s light.

IC 2220 is visible as the star’s light is reflected off the grains of dust. This celestial butterfly structure is almost symmetrical, and spans about one light-year. This phase of a star’s life is short-lived and such objects are thus rare.

Red giants are formed from stars that are ageing and approaching the final stages of their evolution. They have almost depleted their reserves of hydrogen, which fuels the reactions that occur during most of the life of a star. This causes the atmosphere of the star to expand enormously. Stars like HD 65750 burn a shell of helium outside a carbon-oxygen core, sometimes accompanied by a hydrogen shell closer to the star’s surface.

Billions of years in the future, our Sun will also bloat into a red giant. It is expected that the solar atmosphere will inflate well beyond the current orbit of Earth, engulfing all the inner planets in the process. By then, Earth will be already in very bad shape. The huge increase of radiation and the strong stellar winds that will accompany the process of stellar inflation will destroy all life on Earth and evaporate the water in the oceans, before the entire planet is finally melted.

British astronomers Paul Murdin, David Allen and David Malin gave IC 2220 the nickname of the Toby Jug Nebula because of its shape, which is similar to an old English drinking vessel of a type called a Toby Jug with which they were familiar when young.

This image was produced as part of the ESO Cosmic Gems programme [2].

Notes
[1] Stars with more mass run through their lives much more quickly than lighter ones such as the Sun, which have lives measured in billions, rather than millions, of years.

[2] This picture comes from the ESO Cosmic Gems programme, an outreach initiative to produce images of interesting, intriguing or visually attractive objects using ESO telescopes, for the purposes of education and public outreach. The programme makes use of telescope time that cannot be used for science observations. All data collected may also be suitable for scientific purposes, and are made available to astronomers through ESO’s science archive. 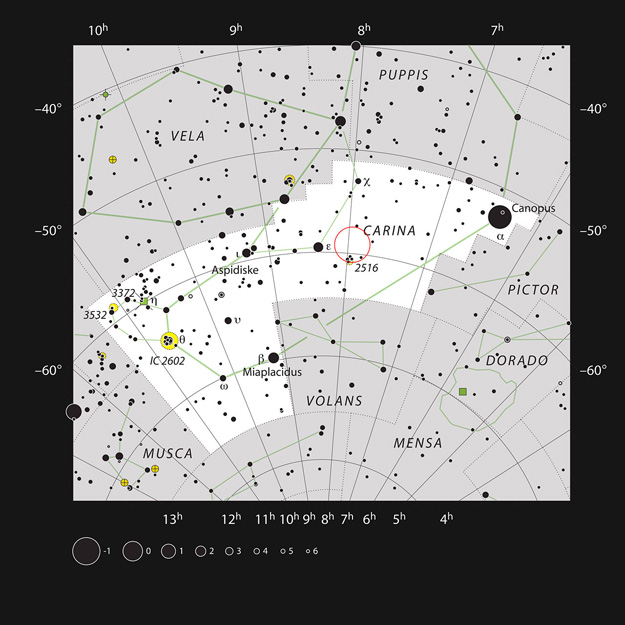 More information
ESO is the foremost intergovernmental astronomy organisation in Europe and the world’s most productive ground-based astronomical observatory by far. It is supported by 15 countries: Austria, Belgium, Brazil, the Czech Republic, Denmark, France, Finland, Germany, Italy, the Netherlands, Portugal, Spain, Sweden, Switzerland and the United Kingdom. ESO carries out an ambitious programme focused on the design, construction and operation of powerful ground-based observing facilities enabling astronomers to make important scientific discoveries. ESO also plays a leading role in promoting and organising cooperation in astronomical research. ESO operates three unique world-class observing sites in Chile: La Silla, Paranal and Chajnantor. At Paranal, ESO operates the Very Large Telescope, the world’s most advanced visible-light astronomical observatory and two survey telescopes. VISTA works in the infrared and is the world’s largest survey telescope and the VLT Survey Telescope is the largest telescope designed to exclusively survey the skies in visible light. ESO is the European partner of a revolutionary astronomical telescope ALMA, the largest astronomical project in existence. ESO is currently planning the 39-metre European Extremely Large optical/near-infrared Telescope, the E-ELT, which will become “the world’s biggest eye on the sky”.