The Highest GigaPan Panoramas Ever Taken On Earth’s Surface

This is a portion of the GigaPan panorama taken by Scott Parazynski at Mount Everest’s Camp IV at 26,000 feet (7,924 meters) at approximately 10 am local time, May 19, 2009. The saddle between Mount Everest and Lhotse, the fourth highest mountain in the world) is also known as the South Col can be seen. The Challenger Center Everest team believes that this is the highest GigaPan image ever taken on the surface of the Earth.

On 20 May 2009 astronaut Scott Parazynski became the first person to have both travelled in space and to stand atop the summit of Mt. Everest. From that vantage point he was able to view a stunning “orbital sunrise” – one not unlike what he had seen during his five space missions.

On his way up the mountain Parazynski managed to capture two GigaPan panoramas – stunningly huge images that are likely to be the highest images of their kind ever taken on the surface of the Earth.

While the achievment of a personal goal was at the core of this climb, Parazynski sought to involve many others in the experience of climbing Earth’s highest mountain. He did this through a variety of outreach activities that utilized traditional and social networking tools.

Given that Parazynski’s prime focus was to be upon climbing the mountain, he was assited in his education and public outreach by Keith Cowing who accompanied Parazynski to Nepal. While Parazynski climbed Everest, Cowing worked at Everest Base Camp as Parazynski’s “news sherpa” collecting and relaying news of his progress to friends and followers back home.

Parazynski and Cowing were provided logistical support by International Mountain Guides (IMG). Parazynski arrived at Everest Base Camp at the beginning of April 2009. Cowing arrived exactly one month later. They stayed at Everest until Parazynski summited on 20 May. You can read their exploits online at onorbit.com/everest. 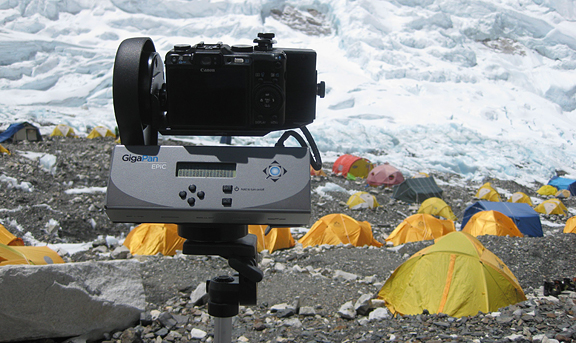 Among the more innovative tools they used was a GigaPan imager. The specific unit used was a GigaPan Epic. This device is a precision robotic camera mount that allows a series of finely coordinated high resolution images to be taken of a large expanse of scenery. After the images are taken, special software methodically stitches the images to gether. Once done, the result is a vast image that can be zoomed into. The amount of detail that these images can provide is often breathtaking.

GigaPan technology was developed by Carnegie Mellon University in collaboration with NASA Ames Research Center’s Intelligent Robotics Group, with additional support from Google. According to their website at gigapansystems.com “GigaPan Systems was established in 2008 as a commercial spin-off of a successful collaboration between researchers at NASA and Carnegie Mellon University that developed the breakthrough GigaPan System for creating high-resolution panoramic images. GigaPan Systems was founded to bring this powerful, high-resolution imaging capability to a broad audience.”

A large community has sprung up around the generation of these images with participants posting their imagery at gigapan.org . Using this site, Cowing and Parazynski made a survey of GigaPan images taken in the Everest region. Only one image was taken at Everest Base Camp at an elevation of 17,500 feet (5,334 meters). No imagery above that elevation was available.

Armed with that knowledge, the pair set out to take what they believe to be the highest GigaPan images ever taken on the surface of Earth. While the GigaPan camera mount is not especially heavy, it is somewhat delicate and cumbersome. At Everest Base Camp, where absolutley everything comes in either by human or yak transport, bringing gear in is at a premium. When it comes to carrying gear up the mountain to advanced base camps at ever increasing altitudes, the transport of gear becomes even more of an issue.

The initial plan was to try and get at least one panorama above the Khumbu Icefall at Camp II. At Everest Base Camp it is actually impossible to see the summit of Everest itself. Only when one climbs up the Icefall via the Western Cwm, can the summit be seen close up in all of its majesty. After making a test panorama of the IMG camp at Everest Base Camp on 1 May 2009 the GigaPan gear was packed for the trip up to Camp II during one of Parazynski’s training rotations.

This is the test panorama taken at Everest Base Camp. Beginning at far left you can see a portion of the Khumbu Icefall and the lower West Shoulder of Everest, the source of many severe avalanches this past season (one of which was fatal). The base of Nuptse is just to the right of the icefall. Roughly 120 degrees from the left margin is the Khumbu valley and the approach all climbers take to reach Everest Base Camp (at 17,500 feet above sea level). The image then swings around the cirque to show the base of Pumori, Lintgren and Cholastse, before arriving back at the base of Everest and the icefall. You can view the panorama here.

The panorama at Camp II was taken on 7 May 2009 using a Canon Powershot G9 at an elevation of 6,600 meters (21,500 feet). This is a 330 degree view given that the SD card in use was of insufficient size to capture a full 360 degrees at full resolution. You can view the panorama here.

Begining at far left you can observe a small portion of the west face of Everest, with a backdrop of clouds just behind Lhotse (the dark summit just inset from the border. Lhotse is the 4th highest mountain in the world). Just below Lhotse is the steep Lhotse Face, the standard approach to the summit of Everest. This series of photographs was taken early in the climbing season, so Camp III (usually located between 24,000 and 24,500 feet – 7,500 meters) had not yet been established.

If you zoom in tightly, however, you can see remnants of the 2008 post-monsoon climbing route: a diagonal cut coarsing up towards the Yellow Band (a limestone band of rock at roughly 25,000 feet – 7,600 meters) is still present. Moving to the right you can see some of the sub-peaks of Lhotse, followed by the intimidating Nupstse, with hanging glaciers and heavily crevassed features. The low point in the skyline is the location of the Western Cwm, the valley than connects Camp II to Camp I, the Khumbu Icefall and Everest Base Camp. On the far right of the frame is the very steep and hulking west face of Everest. Camp II is in the foreground, dominated by the cook and dining tents of the International Mountain Guides and Himex mountaineering teams.

After the image was obtained, the GigaPan unit stayed at Camp II for several weeks until Parazynski’s final push for the summit. Parazynski and Danuru Sherpa of Phortse, Nepal were able to secure some room in haul bags going up the mountain such that the GigaPan unit and its tripod were carried up. The panorama at Camp IV was taken on 19 May 2009. Due to concerns at the time about available storage space on the camera’s memory card, the resolution of the individual photos is less than is possible. This was done to insure that the entire vista was recorded. We are currently working to create a higher resolution version of this image.

This image was taken at Mount Everest’s Camp IV at approximately 10 am local time, May 19, 2009 at Camp IV an elevation of 7,920 meters (26,000 ft). The saddle between Mount Everest (29,035 feet / 8,849 meters) and Lhotse (27,940 feet / 8,516 meters, the fourth highest mountain in the world) is also known as the South Col, and is located at 26,000 feet (7,924 meters) above sea level on the border between Nepal and Tibet. Looking across the windswept and rocky South Col on the left side of the frame is the Everest summit block, rising over 3,000 feet from camp. The climbing route heads up the steep snow and ice slope known as the Triangular Face, and gains the right skyline at a slight bump on the southeast ridge. The route then moves up towards the South Summit – the true summit is hidden just behind the highest point in the frame. You can view the panorama here.

The low point of the image (mid-portion of the 360 degree panorama) is the view towards Tibet, and the location of the Kangshung face of the mountain. Continuing to the right is the summit of Lhotse and its sub-peaks. Several of the Camp IV tents are visible in the foreground.

The Challenger Center Everest team believes that this is the highest GigaPan image ever taken on the surface of the Earth.