The High Frontier: The Untold Story Of Gerard K. O’Neill: A Review

These days it seems that everyone wants to build their own rocket. Not just billionaires but smaller companies as well.
As the size of satellites shrinks and the ubiquity of the technology expands it is close to being possible to build a rocket in a garage and put something into space. OK, I am exaggerating. But my straw man talking point is a lot closer to reality today than it might have been 40 years ago.

Back in the late 1970s and 1980s the potential of space exploration had started to morph into the era of space utilization. Utilization meant different things to different people. Some wanted to make money. Full stop. Others wanted to settle the solar system. Most were somewhere in the middle with an eye on both extremes. But most people tended to think small since space efforts had, to date, involved putting small things in space, once in a while and at great expense to get them there.

Some of you may recall the world before Federal Express or the Internet. It cost a lot to move things across Earth. More to get things into space. What happens when the cost of putting things into space drops while the cost to bring things from space to Earth drops as well? That was at the heart of what Gerald K. O’Neill thought about – what this documentary aptly focuses on. 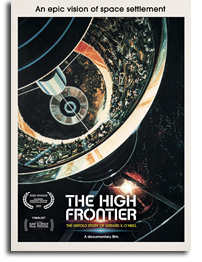 O’Neill was a polymath of sorts. His early work established the basis of much of the fundamental operation of particle accelerators – those monstrous things that peer back to the origin of the universe. He was also on the verge of being chosen as a scientist-astronaut. That’s usually enough to list on one’s resume for a lifetime. But it is his “High Frontier” concept – the use of extraterrestrial resources to build large settlements in space – that this documentary “The High Frontier: The Untold Story Of Gerard K. O’Neill” focuses upon.

Gerry O’Neill is the alternate Carl Sagan from the 1980s that most people today have never heard of. It is not his fault – he focused on ideas not on promotion. His impact on the exploration and utilization of space is arguably much even more profound than Sagan’s – even if it was not as flashy as Sagan’s considerable contributions. Sagan gave us an appreciation of the wonders that lie out there. O’Neill revealed a way for all of us to actually go and live there.

In the time since O’Neill was alive and influencing minds, much of what he predicted has come to pass. The basic launch and utilization infrastructure he envisioned is now assembling itself on Earth. While the 1980s did have big rockets it did not have much in the way of in-space construction and advanced materials engineering. Now we have dramatically enhanced computing, much more advanced materials, and the ability to print things from a computer file. You can buy vaccines that are molecular machines built from scratch via computer code as easily as you can print a house from a data file on a cellphone. Indeed, you can also print satellites – and the rockets that launch them – from a computer file. All that is now lacking is to put this nascent print-on-demand capability in place off-Earth with the ability to reach and utilize resources in space.

This is a documentary which means it documents things in the past. As such there is a lot of video footage from the 70s and 80s which can hurt your brain to watch. But that is how these ideas were often first encountered. Contemporary drawings and paintings are revived and, in many cases, animated so as to vividly enhance the ideas that they originally portrayed. But there are also some new animations of space colonies that are astonishingly accurate and realistic. It can be a bit jarring to jump back and forth from low- and high-res visions of the future – but after a while you get used to it. That was then, and this is now. We do that in our heads all the time.

And of course, documentaries involve interviewing people who were there when things happened. College aged students in the 70s and 80s who were active in space were male. Now they are 60-something (or older) males. I am one of them. There are several dozen people interviewed in this documentarym- the vast majority of them 60-something males. Aside from O’Neill’s family only 3 other women appear – and only 2 are of the up and coming generation. With the constant reiteration of how O’Neill brought forth the future – and the constant use of the phrase “we are Gerry’s kids” – it would have been nice to see a few more people who now stand on the shoulders of these pioneers and now seek to make it all become reality. More on that in a moment.

But I do not want to underestimate the impact of Gerry O’Neill. The very first space thing I worked on was a student project on Solar Power Satellites in 1975. The core notion within O’Neill’s vision was to use solar power satellites to beam power back to Earth, move industry into space, and use the space colony approach to build them using extraterrestrial resources. This experience is how I met Alan Ladwig and Leonard David who ran the project at a little non-profit called FASST on M Street in Washington DC. My space career – as meandering as it has been – started there.

In the film is a clip of a test firing of a small rail gun – a small version of the electromagnetic catapult that O’Neill wanted to use to send material off of the Moon and, employed in a different context, as a way to move asteroids around the solar system. I believe that this was conducted at Princeton University at a May 1979 meeting. I was there and clearly recall a test firing identical to what is in this documentary. It is hard to pick myself out of the crowd since there were 100 twenty-something male students with longish hair and mustaches.

Later in that conference we were all drinking wine from cheap plastic glasses and eating cheese. There were not enough chairs so everyone sat on the floor. I found myself sitting with O’Neill, his wife Sasha, and Freeman Dyson. It was fun and left a huge impression on me. Decades later I was walking from a Metro Station in Washington, DC on a snowy day to a SpaceX reception. With me were astronaut Eileen Collins and Esther Dyson. I told Esther about the wine in cheap plastic cups experience and she said: “Yes, that would be my father”. Some conversations never leave you.

Like all of the folks in this documentary I belonged to the L5 society, the National Space Institute (before they both merged), the Space Space Studies Institute, etc. I read Omni magazine, “The High Frontier” (my paperback copy says that I bought it on 24 December 1977), Harry Stine’s books, and still have my Whole Earth Catalog publication “Space Colonies”.

A few years after the Princeton conference I was working at Rockwell International after having moved to California to work on Jerry Brown’s 1980 presidential campaign – attracted by his interest in space. And 40 years ago to the day as I write this review – a few years after that Princeton conference – I stood next to Brown and watched the first Shuttle launch. Within a few years my friends flew on shuttles and things I helped design were launched into space. If I were to follow all of the things that brought me to that point in my career Gerry O’Neill and his ideas were in the enabling path. I am certainly not alone in this regard.

Again, as I noted this is a documentary and it documents very well who Gerry O’Neill was and what impact he had on people and their careers. Toward the end we see some clips of things that Jeff Bezos and Elon Musk are doing. While they are somewhat younger than me, O’Neill’s vision touched them well and unlike most people they have the non-trivial financial resources to act upon their dreams. So they do.

I complained (lightly) above that I wish that more younger people were in this documentary. Again, the people interviewed in this film were young when all of this happened. I guess today’s young space folks are off actually making O’Neill’s ideas become reality – not knowing exactly where these ideas originally came from. I would think that they should take the time to watch this documentary – if for no other reason than to see how all of this started – and how a small army of young people went out to help start and nourish today’s space industries.

Much of the core concepts that O’Neill first put forth are now at the root of what powers the growing space industry today. It is important to know where your dreams come from. Who knows – maybe younger viewers will pick up on some of O’Neill’s ideas that us older veterans have forgotten.

Event Details:
What: FREE Live Global Premiere of “The High Frontier: The Untold Story of Gerard K. O’Neill”
When: April 17th at 8pm ET / 5pm PT, on SpaceChannel.com
RSVP HERE: https://www.eventbrite.com/e/high-frontier-global-premiere-tickets-145136546317
Release: The film will be distributed by Vertical Entertainment, and will be available on VOD the following day, April 18th.