The Connection Between Aviation and Polar Research 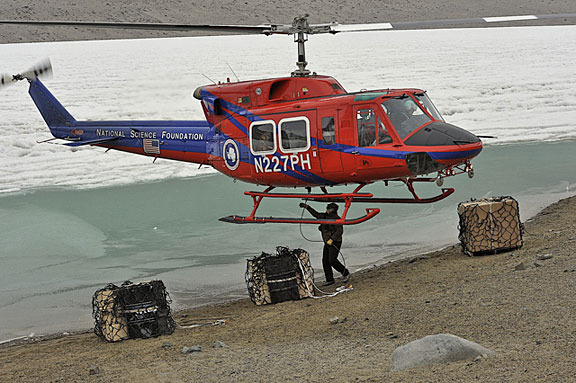 Charles Hood, Special to the Sun: “It’s so big!” somebody ahead of me said. Feeling like an astronaut in my red parka and white boots, I followed the others out of the U.S. C-17 military plane and onto the snow of Pegasus Ice Runway. We were here. But what a “here” it was.

Whoever ahead of me had said it’s big was sure right — the view all around us was big … big and white and magnificent. We were standing on top of five feet of tamped snow on top of 150 feet of glacial ice on top of a few hundred more feet of the Ross Sea.

As a visiting author sponsored by the National Science Foundation’s Artists and Writers Program, I struggled to take it all in. My book will explore the relationship between aviation and science, and so for me, my first flight was just another working day. I tried to write notes, grab photographs, and not trip over my boots, all at the same time.

Aviation in Antarctica started on Feb. 4, 1902, when Robert Falcon Scott went up in a tethered hydrogen-filled balloon off the Ross Ice Shelf. Soon planes replaced balloons as the tool of choice, and the First World War helped develop planes that could go farther and carry heavier loads.

Once Charles Lindbergh crossed the Atlantic solo, more distant goals were attempted, and the world began to look south. Who would be the first to fly over the South Pole? 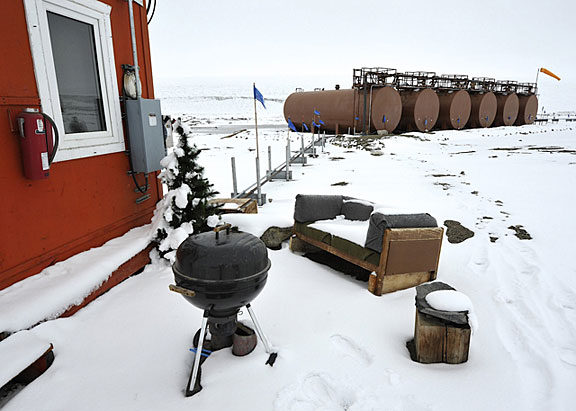 Marble Point Refueling Station offers all the essentials: fuel tanks, a wind sock, and a room with a view. Photo Credit: Charles Hood

On Nov. 28, 1929, an answer was provided by an audacious team led by Richard Byrd. They used a Ford Trimotor, flying nonstop on the outbound leg but stopping to refuel from a cache on the return leg. There is a reason so many camps and mountains are named after him; Adm. Byrd returned to Antarctica on four other expeditions, including Operation Deep Freeze in 1956-1957.

Reading his book “Alone” in the public library when I was 10 was one of the main reasons I had wanted to come to Antarctica.

It was only later, reviewing technical papers on geology or learning about ground-penetrating radar, that I realized how much research airplanes facilitate. But was I being mistaken? Is there really a strong relationship between flying and doing science?

“Oh, it’s simple,” Ian Dalziel told me, thinking about his work with GPS teams on the West Antarctic Ice Sheet for a project called POLENET. “No airplanes means no science.” The first person to land at the South Pole in a Twin Otter, Dalziel remembers when things were more often “a wing and a prayer.”

Just to pick one region as an example, in the McMurdo Dry Valleys, helicopter support is essential. With a complex schedule worked out the night before, each day helicopters ferry loads, break down camps, collect samples, and move science teams from one research site to another. At the head of the season, they help put all the supplies and equipment in place, and as the season ends, they have to take it all out again. 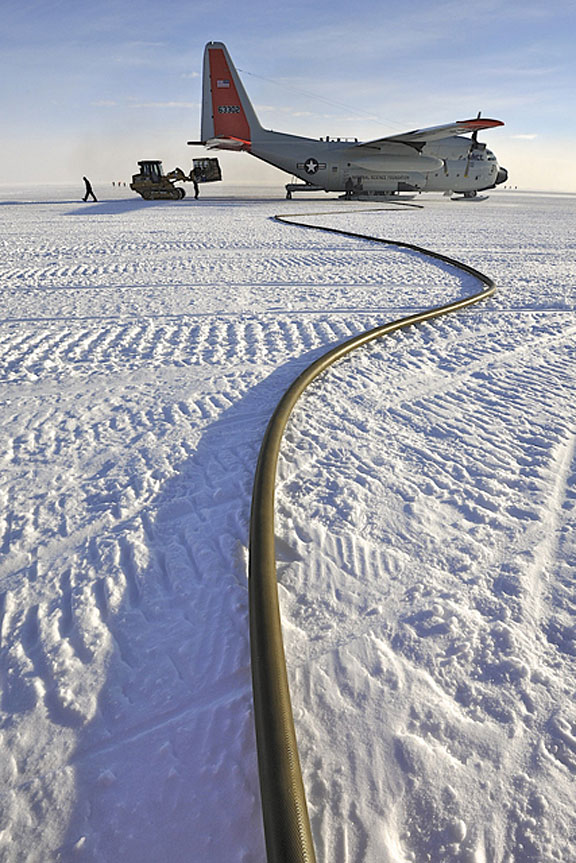 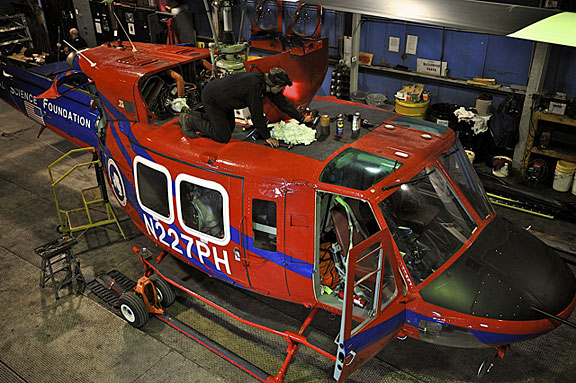 The Bell 212 “7 Papa Hotel” comes into the hanger for overnight servicing. Hanging out with the helicopter mechanics, with the classic rock playing and the banter flowing, reminded Charles Hood of the best aspects of a hometown filling station. Photo Credit: Charles Hood

What fascinated me was the way the infrastructure worked. Some buildings date from the first Navy days. At Marble Point, helicopters stop to refuel, and when they get the chance, the pilots can top off, too.

“We do what we can to help — if it’s only a cup of coffee and a place for them to grab a sandwich,” says Marble Point manager Bodie Davies. “Some days it’s busy as Heathrow here, with loads coming and going all day long.”

Marble Point has a crew of just three: Bodie the manager, Karen the cook, and on a two-week rotation, a fuel technician, who was Tonya when I was there. Everybody helps with all of the jobs — including putting up with me. An unexpected change in weather kept me there four days. We could have had a barbecue, if only the wind would have let up.

When I talked to scientists, all praised the helicopter pilots. But when I spoke to the pilots, their praise was for the ground crews. Once the aircraft come back to McMurdo for the night, then the mechanics open their toolboxes, click on the shop lights, and do the unseen yet highly essential work of keeping these birds tuned up and flying.

Part of the current success record is meticulous maintenance, and Texas Dave and his crew make sure the helicopters are kept in top condition, even if it means staying a few extra hours past the end of their shift. Hanging out with them, with the classic rock playing and the banter flowing, reminded me of the best aspects of a hometown filling station. On my blog, when I wrote about their work, I titled it “an all-American garage.”

In contrast to the helicopters at Marble Point, when the ski-equipped LC-130 planes land somewhere on the Ice, they often bring fuel rather than needing to take it. Called Hercs, these planes are run by the New York Air National Guard. This is a very successful airframe, and the plane is broadly known as being able to go anywhere and carry anything.

A base camp called WAIS (West Antarctic Ice Sheet) Divide provides support for ice-core projects. The Hercs running supplies and personnel often can land with extra fuel, which is offloaded into the camp to top off existing reserves. The generators and camp vehicles all share a common fuel source, so one plane brings the gas for everything.

Up at CTAM — a camp in the Central Transantarctic Mountains — it’s a similar story. Hercs and helicopters there support paleontologists who are excavating dinosaurs, as well as glaciologists and even meteorite recovery teams. When I was at the South Pole, one of the meteorite teams had just come in from the field. Melissa Lane of the Planetary Science Institute in Tucson and astronaut Serena Aunon shared stories about their best finds. Safely wrapped against contamination, the specimens were going to stay refrigerated and be flown to McMurdo, and then would be shipped out on the resupply vessel home.

How does this fit in with my own results? Jessie Crain, currently the senior NSF representative at McMurdo, sums it up: “Many of the extraordinary scientific achievements of the U.S. Antarctic Program in the past 50 years would not have been possible without aviation support.”

Pilots agree. David Nelson is Science Support lead at McMurdo and an experienced pilot himself. He’s pragmatic, and notes with sly humor that research in Antarctica “runs on aircraft and fuel; you’d better have plenty [of] both, along with the dedicated crews to keep them running in harsh conditions or you’ll go nowhere — unless you want to go back to sled dogs and ponies.”

Each year the missions are refined. It is never perfect: storms come, schedules collapse, some teams need more support than the spreadsheets hoped for. In classical mythology, “Erebus” was the son of Chaos. It is not surprising then that Helo Cliffs near the summit of Mount Erebus is named for a Coast Guard helicopter that wrecked in 1971.

The remains are still there. It is a grim site (especially when seen out the window of one’s own helicopter) but in this case, all four on board survived.

What will the future bring? Everybody had a different answer — from pilotless drones to hovercraft to new generations of helicopters with twice or even four times the current range. My favorite answer remembered the Jetsons — “We all need personal jet-packs!”

Until then I must say I am awed by how well things run. Despite dinged props, four-day storms and that last extra box of meteorites, everything and everybody ends up getting where she or he or it is supposed to be.

What is the future of aviation in Antarctica? I predict more of the same: brilliant flying, adroit logistics, and the untold stories of dozens and dozens of daily heroes. Science in Antarctica will not be giving up its wings any time soon. 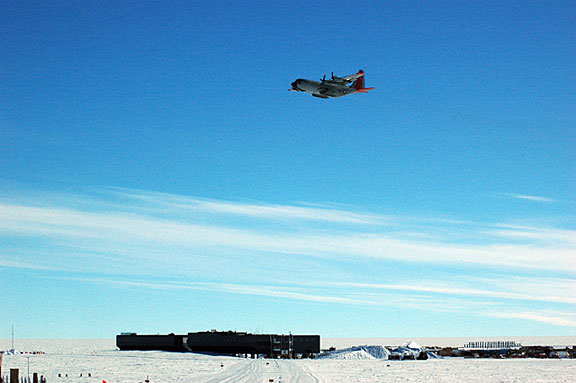 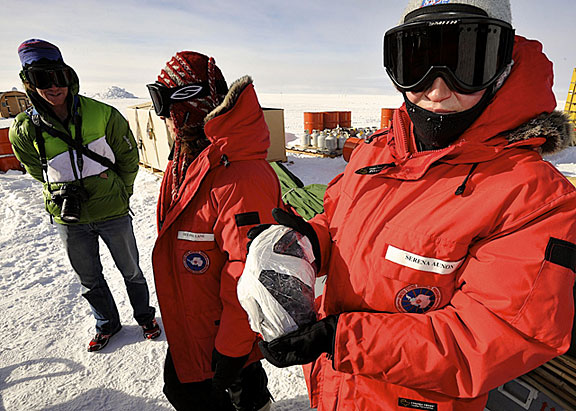 Astronaut Serena Aunon shows a meteorite wrapped in plastic while in transit at the South Pole. Photo Credit: Charles Hood 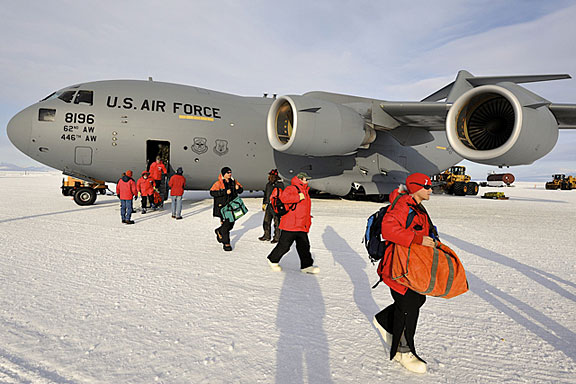