That Time My Friend Walked Above The Sky

Virtually every person who has been into space as written at least one book on their experiences. Given the awesome nature of space travel, its not that hard to do. Alas, all too often the books are formulaic, with everything presented in linear order – as if all astronaut’s lives were orchestrated according to a perfect checklist – with no detours, errors, or stupid stuff.

And nothing ever goes wrong on the missions – unless that’s the drama pivot around which their book is crafted. And everyone involved in the mission always behaves. By glossing over personal failings, bad decisions, and bad luck, you often get the impression from astronauts that spaceflight is an occasionally heroic endeavor with lots of tedium mixed with occasional problems or accidents that astronauts need to surmount or survive – according to that checklist they always seem to have.

Then there’s the books written by people who have attempted to climb Mt. Everest or other impressive climbs. Again, the sheer audacity of these climbs almost writes books with little human intervention required – other than memory. Of course, many climber tales are also crafted in a formulaic fashion – with one major exception: climbers like to talk about their fears, the awful conditions they endured, stupid choices, and how their path to the summit and back led them to new places in life – some of which are not always good. These books also talk about how one has to deal with real danger that can appear at any moment – danger that no one can ever be totally prepared for. And that danger can be unrelenting. There is no comfortable ride to the summit like there is to outer space. 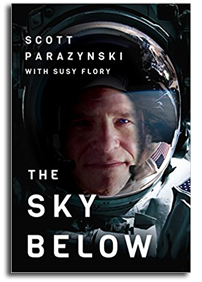 This book is about being both an astronaut and a climber. But it is also about being an explorer, nerd, athlete, physician, husband, father – and most importantly – a flawed human who is just trying to experience everything as best he can. Scott tells his story well and made the wise decision to use Susy Flory’s writing expertise to allow the story tell itself. Newsflash: every adventurer needs a good editor/co-author.

Truth in writing: I am a lapsed climber. My wife still is (that’s how we met). Scott is a long time friend – so my bias with regard to this book and this topic is hard to suppress. In that regard, I spent a month at Everest Base Camp in 2009 supporting Scott’s second (and successful) summit attempt. Mere days after arriving at Everest Base Camp we both witnessed one of the largest avalanches to ever fall off of Everest (my video is included in the ebook version of “The Sky Below”). Luckily no one was hurt. A week or so later at base camp I watched an avalanche of similar size sweep across the same part of the mountain. As best I knew Scott was exactly where it hit the hardest. I only learned a while later that he was safe – but his climbing partner had a very close call and a sherpa guide was killed nearby. This all just happened before my eyes. In 2015 people sleeping their tents precisely where Scott and I were camped 6 years earlier were killed after a massive earthquake-induced avalanche roared through base camp. It happens just like that.

Its like this for weeks at a time when you attempt something like Everest. The danger is literally at your fingertips. And you have to deal with this while your body consumes itself in places where people are not supposed to be trying to live. Your safety is probably more a result of one’s personal behavior than most of the things associated with spaceflight. It is this sort of ever-present risk blissfully obscured by the awesome majesty of the Himalayas that Scott managed to navigate and transcend. The book takes you through it all in a surprisingly easy flowing style.

No one emerges from spaceflight or Everest unchanged – and no one makes these trips without sacrifices made by friends and family. Scott does not shy away from what it took him to make all of his adventures happen – and the consequences (good and bad) that accompany dealing with an unquenchable thirst to explore. As I noted above the astronaut book genre usually does not delve into this aspect of an astronaut’s life.

To be certain, its not like this book is all about difficult, sad stuff. Not at all. Quite the opposite. It is abundantly clear that it is a lot of fun to be Scott Parazynski. And he’s not done having fun. Some of the things described in this book are just jaw dropping and described in great detail with a lot of humility and awe added for good measure. And of course, no book about – or by – an astronaut would be complete without a detailed description of the whole NASA blue suit subculture – one where everyone seems to have several goofy nicknames and lots of strange food preferences – all while riding into outer space on rocket ships.

In 2009 I watched Scott and several hundred of people slog up Mt. Everest. Some made it to the summit. Some of them left base camp but never came back. And many turned back before the summit and then went home – never to return. I have always found the subset of climbers who came back without reaching the summit only to try again (and again) to be the most interesting of them all. Its one thing to try and succeed once. Its quite another to fail and then keep trying until you get it right (which is the whole point of life to begin with). That is what this book is really about.

“The Sky Below” is as much about Scott Parazynski’s journey as it is about his destination. Indeed, as written, they are one in the same.