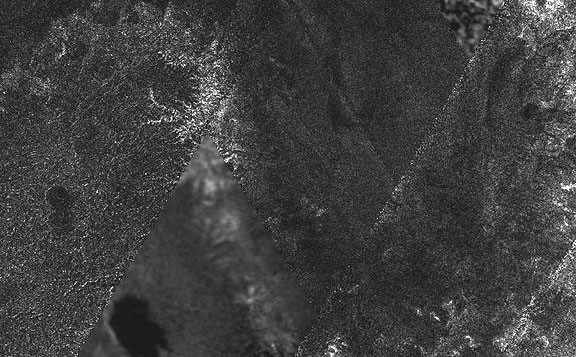 IAU: Saturn’s haze-enshrouded moon Titan turns out to have much in common with Earth in the way that weather and geology shape its terrain, according to two pieces of research to be presented at the XXVII General Assembly of the International Astronomical Union (IAU) in Rio de Janeiro, Brazil. Wind, rain, volcanoes, tectonics and other Earth-like processes all sculpt features on Titan’s complex and varied surface in an environment more than 100°C colder on average than Antarctica.

IAU: Saturn’s haze-enshrouded moon Titan turns out to have much in common with Earth in the way that weather and geology shape its terrain, according to two pieces of research to be presented at the XXVII General Assembly of the International Astronomical Union (IAU) in Rio de Janeiro, Brazil. Wind, rain, volcanoes, tectonics and other Earth-like processes all sculpt features on Titan’s complex and varied surface in an environment more than 100°C colder on average than Antarctica.

“It is really surprising how closely Titan’s surface resembles Earth’s,” says Rosaly Lopes, a planetary geologist at the Jet Propulsion Laboratory (JPL) in Pasadena, California, who is presenting the results on Friday, 7 August. “In fact, Titan looks more like the Earth than any other body in the Solar System, despite the huge differences in temperature and other environmental conditions.”

The joint NASA/ESA/ASI Cassini-Huygens mission has revealed details of Titan’s geologically young surface, showing few impact craters, and featuring mountain chains, dunes and even “lakes”. The RADAR instrument on the Cassini orbiter has now allowed scientists to image a third of Titan’s surface using radar beams that pierce the giant moon’s thick, smoggy atmosphere. There is still much terrain to cover, as the aptly named Titan is one of the biggest moons in the Solar System, larger than the planet Mercury and approaching Mars in size.

Titan has long fascinated astronomers as the only moon known to possess a thick atmosphere, and as the only celestial body other than Earth to have stable pools of liquid on its surface. The many lakes that pepper the northern polar latitudes, with a scattering appearing in the south as well, are thought to be filled with liquid hydrocarbons, such as methane and ethane.

“With an average surface temperature hovering around -180 °C, water cannot exist on Titan except as deep-frozen ice as strong as rock,” Lopes says. On Titan, methane takes water’s place in the hydrological cycle of evaporation and precipitation (rain or snow) and can appear as a gas, a liquid and a solid. Methane rain cuts channels and forms lakes on the surface and causes erosion, helping to erase the meteorite impact craters that pockmark most other rocky worlds, such as our own Moon and the planet Mercury.

Other new research presented at the IAU General Assembly points to current volcanic activity on Titan, but instead of scorching hot magma, scientists think these “cryovolcanoes” eject cold slurries of water-ice and ammonia. Scientists have spotted evidence for these outflows using another Cassini instrument called the Visual and Infrared Mapping Spectrometer (VIMS). This device can gather the infrared light from the Sun that is reflected back by Titan’s surface after passing through its atmosphere, giving clues about the identity of the chemical compounds found on Titan’s surface.

VIMS had previously detected an area, called Hotei Regio, with a varying infrared signature, suggesting the temporary presence of ammonia frosts that subsequently dissipated or were covered over. Although the ammonia does not stay exposed for long, models show that it exists in Titan’s interior, indicating that a process is at work delivering ammonia to the surface. RADAR imaging has indeed found structures that resemble terrestrial volcanoes near the site of suspected ammonia deposition.

At the IAU General Assembly, new infrared images of this region, with ten times the resolution of prior mappings, will be unveiled. “These new results are the next advance in this exploration process,” says Robert M. Nelson, a senior research scientist, also at JPL, who presented a result on Wednesday, 5 August. “The images provide further evidence suggesting that cryovolcanism has deposited ammonia onto Titan’s surface. It has not escaped our attention that ammonia, in association with methane and nitrogen, the principal species of Titan’s atmosphere, closely replicates the environment at the time that life first emerged on Earth. One exciting question is whether Titan’s chemical processes today support a prebiotic chemistry similar to that under which life evolved on Earth?”

Yet more terrestrial-type features on Titan include dunes formed by cold winds, and mountain ranges. These mountains might have formed tectonically when Titan’s crust compressed as it went into a deep freeze, in contrast to the Earth’s crust, which continues to move today, producing earthquakes and rift valleys on our planet.

Many Titan researchers hope to observe Titan with Cassini for long enough to follow a change in seasons. The new image released by JPL accompanying this release shows what appears to be a dried-out lake at Titan’s south pole. Lopes thinks that the hydrocarbons there likely evaporated because this hemisphere is experiencing summer. When the seasons change in several years and summer returns to the northern latitudes, the lakes so common there may evaporate and end up pooling in the south.

This IAU General Assembly has personal significance for Lopes, as she was born and raised in Rio de Janeiro. From abroad and on periodic visits back to her home country, Lopes has encouraged young Brazilians to pursue careers in science and technology. “It’s wonderful to be back again”, Lopes says.

The full text of this press release is available on
http://www.iau.org/public_press/news/release/iau0915/

The IAU is the international astronomical organisation that brings together almost 10 000 distinguished astronomers from all nations of the world. Its mission is to promote and safeguard the science of astronomy in all its aspects through international cooperation. The IAU also serves as the internationally recognised authority for assigning designations to celestial bodies and the surface features on them. Founded in 1919, the IAU is the world’s largest professional body for astronomers.