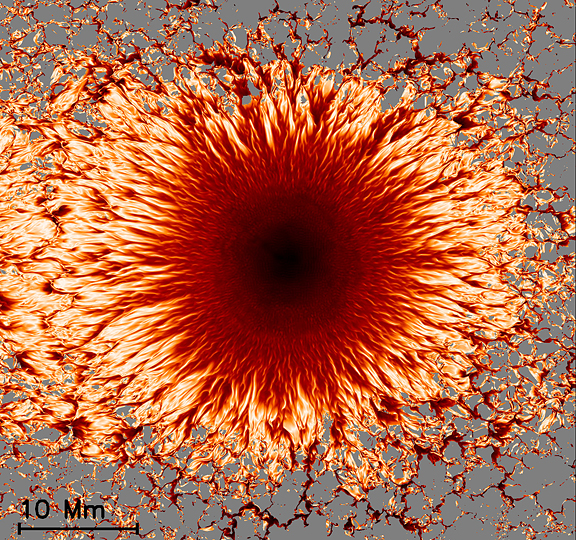 In a breakthrough that will help scientists unlock mysteries of the Sun and its impacts on Earth, an international team of scientists led by the National Center for Atmospheric Research (NCAR) has created the first-ever comprehensive computer model of sunspots. The resulting visuals capture both scientific detail and remarkable beauty.

In a breakthrough that will help scientists unlock mysteries of the Sun and its impacts on Earth, an international team of scientists led by the National Center for Atmospheric Research (NCAR) has created the first-ever comprehensive computer model of sunspots. The resulting visuals capture both scientific detail and remarkable beauty.

The high-resolution simulations of sunspot pairs open the way for researchers to learn more about the vast mysterious dark patches on the Sun’s surface. Sunspots are the most striking manifestations of solar magnetism on the solar surface, and they are associated with massive ejections of charged plasma that can cause geomagnetic storms and disrupt communications and navigational systems. They also contribute to variations in overall solar output, which can affect weather on Earth and exert a subtle influence on climate patterns.

The research, by scientists at NCAR and the Max Planck Institute for Solar System Research (MPS) in Germany, is being published this week in Science Express.

“This is the first time we have a model of an entire sunspot,” says lead author Matthias Rempel, a scientist at NCAR’s High Altitude Observatory. “If you want to understand all the drivers of Earth’s atmospheric system, you have to understand how sunspots emerge and evolve. Our simulations will advance research into the inner workings of the Sun as well as connections between solar output and Earth’s atmosphere.”

Ever since outward flows from the center of sunspots were discovered 100 years ago, scientists have worked toward explaining the complex structure of sunspots, whose number peaks and wanes during the 11-year solar cycle. Sunspots encompass intense magnetic activity that is associated with solar flares and massive ejections of plasma that can buffet Earth’s atmosphere. The resulting damage to power grids, satellites, and other sensitive technological systems takes an economic toll on a rising number of industries.

Creating such detailed simulations would not have been possible even as recently as a few years ago, before the latest generation of supercomputers and a growing array of instruments to observe the Sun. Partly because of such new technology, scientists have made advances in solving the equations that describe the physics of solar processes.

The work was supported by the National Science Foundation, NCAR’s sponsor. The research team improved a computer model, developed at MPS, that built upon numerical codes for magnetized fluids that had been created at the University of Chicago.

The new computer models capture pairs of sunspots with opposite polarity. In striking detail, they reveal the dark central region, or umbra, with brighter umbral dots, as well as webs of elongated narrow filaments with flows of mass streaming away from the spots in the outer penumbral regions. They also capture the convective flow and movement of energy that underlie the sunspots, and that are not directly detectable by instruments.

The models suggest that the magnetic fields within sunspots need to be inclined in certain directions in order to create such complex structures. The authors conclude that there is a unified physical explanation for the structure of sunspots in umbra and penumbra that is the consequence of convection in a magnetic field with varying properties.

The simulations can help scientists decipher the mysterious, subsurface forces in the Sun that cause sunspots. Such work may lead to an improved understanding of variations in solar output and their impacts on Earth.

— Supercomputing at 76 Trillion Calculations per Second —

To create the model, the research team designed a virtual, three-dimensional domain that simulates an area on the Sun measuring about 31,000 miles by 62,000 miles and about 3,700 miles in depth – an expanse as long as eight times Earth’s diameter and as deep as Earth’s radius. The scientists then used a series of equations involving fundamental physical laws of energy transfer, fluid dynamics, magnetic induction and feedback, and other phenomena to simulate sunspot dynamics at 1.8 billion points within the virtual expanse, each spaced about 10 to 20 miles apart. For weeks, they solved the equations on NCAR’s new bluefire supercomputer, an IBM machine that can perform 76 trillion calculations per second.

The work drew on increasingly detailed observations from a network of ground- and space-based instruments to verify that the model captured sunspots realistically.

The new models are far more detailed and realistic than previous simulations that failed to capture the complexities of the outer penumbral region. The researchers noted, however, that even their new model does not accurately capture the lengths of the filaments in parts of the penumbra. They can refine the model by placing the grid points even closer together, but that would require more computing power than is currently available.

“Advances in supercomputing power are enabling us to close in on some of the most fundamental processes of the Sun,” says Michael Knolker, director of NCAR’s High Altitude Observatory and a co-author of the paper. “With this breakthrough simulation, an overall comprehensive physical picture is emerging for everything that observers have associated with the appearance, formation, dynamics, and the decay of sunspots on the Sun’s surface.”