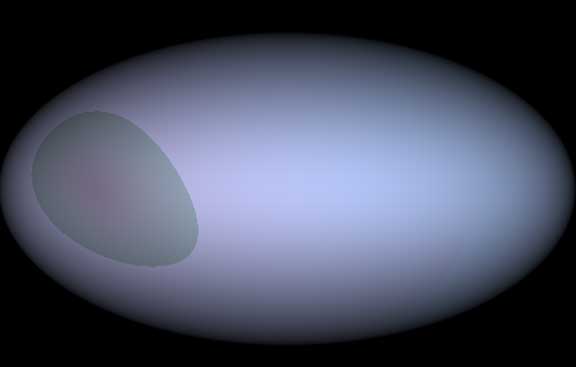 A dark red area discovered on dwarf planet Haumea appears to be richer in minerals and organic compounds than the surrounding icy surface. The discovery will be presented at the European Planetary Science Congress in Potsdam by Dr. Pedro Lacerda on Wednesday 16 September.

A dark red area discovered on dwarf planet Haumea appears to be richer in minerals and organic compounds than the surrounding icy surface. The discovery will be presented at the European Planetary Science Congress in Potsdam by Dr. Pedro Lacerda on Wednesday 16 September.

The spot was discovered by measuring changes in its brightness as it rotates. The origin of the spot is unknown, however its “light curve”, which describes variations in its brightness over time, is not exactly the same shape in all wavelengths. Small but persistent differences indicate that the dark spot is slightly redder in visible light and slightly bluer at infrared wavelengths.

“Our very first measurements of Haumea told us there was a spot on the surface. The two brightness maxima and the two minima of the light curve are not exactly equal, as would be expected from a uniform surface. This indicates the presence of a dark spot on the otherwise bright surface. But Haumea’s light curve has told us more and it was only when we got the infrared data that were we able to begin to understand what the spot might be,” said Dr. Pedro Lacerda, Newton Fellow at Queen’s University Belfast.

Possible interpretations of these measurements are that the spot is richer in minerals and organic compounds, or that it contains a higher fraction of crystalline ice. If the spot is a scar of a recent impact onto Haumea then the spot material might resemble the composition of the impactor, perhaps mixed with material from the inner layers of Haumea.

Haumea orbits the Sun beyond Neptune, in a region known as the Kuiper belt. It is the fourth largest known Kuiper belt object (KBO) after Eris, Pluto and Makemake. These large KBOs, together with main-belt asteroid Ceres, are known as dwarf planets. One of the most surprising characteristics of Haumea is its very fast rotation, with one day lasting only 3.9 Earth hours. No other large object in the solar system spins as fast as Haumea. The rapid spin deforms Haumea into an elongated ellipsoid, 2000 km by 1600 km by 1000 km, whose shape balances gravitational and rotational accelerations. It is believed that Haumea was spun up by a massive impact more than a billion years ago.

Because of its large distance from the Earth, Haumea is visible only as a rather uninformative point of light. Most of what we know about this object was derived from its brightness variations, or “light curve”. Because of its rotation and elongated shape, Haumea brightens and dims periodically as it reflects more and less sunlight. The extent of this variation tells us how elongated Haumea is, and the time between each brightening and dimming is a measure of the rotation period. The precise Haumea shape and spin period imply that it has a density 2.5 times that of water. Since we know from spectroscopic observations that Haumea is covered in water ice, this high density implies Haumea must have a rocky interior, in contrast with its bright icy surface.

New observations of this spot are planned for early 2010 using the ESO Very Large Telescope. “Now we will get detailed spectroscopy of the spot to hopefully identify its chemical composition and solve the puzzle of its origin” Lacerda concluded.

Images relevant to this press release can be found at: http://www.europlanet-eu.org/demo/index.php?option=com_content&task=view&id=156