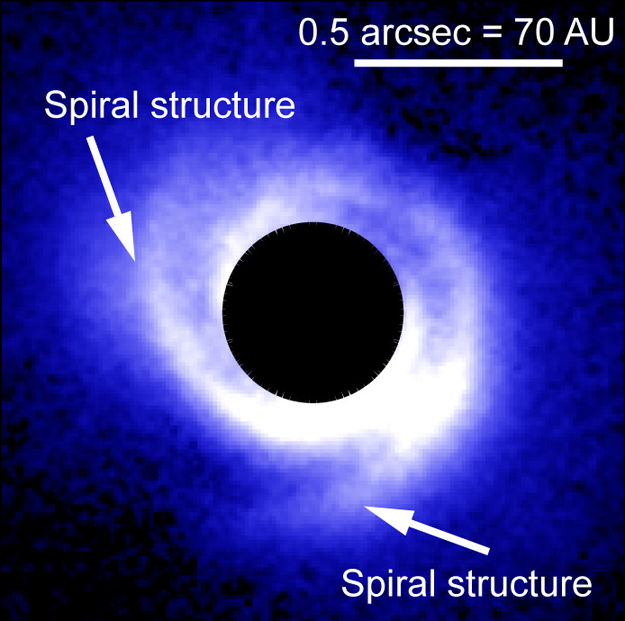 An international team of astronomers has used HiCIAO (High Contrast Instrument for the Subaru Next Generation Optics) [Note 1] to observe a disk around the young star SAO 206462. They succeeded in capturing clear, detailed images of its disk, which they discovered has a spiral structure with two clearly discernable arms. On the basis of their observations and modeling according to spiral density wave theory, the team suspects that dynamic processes, possibly resulting from planets in the disk, may be responsible for its spiral shape. This research may provide the basis for another indirect method of detecting planets.

An international team of astronomers has used HiCIAO (High Contrast Instrument for the Subaru Next Generation Optics) [Note 1] to observe a disk around the young star SAO 206462. They succeeded in capturing clear, detailed images of its disk, which they discovered has a spiral structure with two clearly discernable arms. On the basis of their observations and modeling according to spiral density wave theory, the team suspects that dynamic processes, possibly resulting from planets in the disk, may be responsible for its spiral shape. This research may provide the basis for another indirect method of detecting planets.

Scientists have known that planets form in a broad disk of dust and gas surrounding a star, a so-called “protoplanetary disk.” However, the composition of these special disks as well as the process by which they give rise to planets have remained a mystery. The bright light of a central star makes it difficult to detect fainter objects around it or to capture a detailed image of the composition of the disk itself. Recent research with HiCIAO, Subaru Telescope’s “planet-hunter”, has overcome some of those obstacles. By masking the bright light from the central star, the instrument can then detect more detailed features of the star’s disk and the objects that it contains.

As part of the SEEDS project (Strategic Exploration of Exoplanets and Disks with the Subaru Telescope) [Note 2], the researchers in the current study used HiCIAO to conduct observations of the disk around the young star SAO 206462 (sometimes referred to as HD 135344B). This star is about 460 light-years away from Earth in the constellation Lupus (“the wolf”) and is some 9 million years old. The radius of the disk is 20 billion kilometers (12.4 billion miles), about five times greater than Neptune’s distance from the Sun in our solar system.

The researchers captured images of SAO 206462’s disk (Figure 1) that clearly reveal its spiral structure and indicate some features of its composition. They then were able to analyze its spiral structure by using density wave theory to infer the properties of the disk. This process allows a productive interface between observational data and a theoretical model.

Density wave theory has been applied to explain the spiral arm structure of spiral galaxies. It proposes that a rotating disk of matter would “naturally” develop regions of enhanced density, so-called “spiral density waves”, due to differential rotation. The wave-like concentration of dense material grows and forms a spiral pattern. A similar process may be at work in SAO 206462’s disk. When the team compared their model with the observational data, they found that it was useful in revealing the features of the disk (Figure 2).

The team was able to use the model to estimate the temperature of the disk based on dynamic processes and predict the evolution of the spiral structures. The observational data conform to the model. Although they could not specifically identify the origin of the spirals, it is possible that planets embedded in the disk may be the catalysts for the development of its shape. If a planet has already been formed in a disk, its gravity can produce a density wave, which then may result in the creation of a spiral structure in the protoplanetary disk (Figure 3).

Although the observed image does not necessarily show the existence of a planet, the possibility remains that a planet in the disk causes the density wave.

This is the first time that density wave theory has been applied to measuring the features of a protoplanetary disk. The research takes an important step in explaining how a spiral disk could form and may mark the development of another indirect means of discovering planets.

1) HiCIAO (High Contrast Instrument for the Subaru Next Generation Adaptive Optics) is designed to block out the bright direct light from a central star so that it can image nearby faint objects such as planets and detect faint dust disks around the central star.

2) SEEDS (Strategic Exploration of Exoplanets and Disks with Subaru Telescope) is a large-scale project led by Motohide Tamura at NAOJ (National Astronomical Observatory of Japan). Researchers conduct observations at the Subaru Telescope that focus on the direct imaging and examination of exoplanets and disks to better understand the formation of planetary systems. Over 100 scientists and 25 institutions belong to the international consortium supporting the project. Since 2009, the SEEDS project has yielded a set of impressive findings, including imaging of the detailed structure of disks in AB Aur, LkCa15, HR4796A, and HD 169142.

1) An image of the disk around SAO 206462 captured with HiCIAO. A coronagraph blocks the direct light of the central star, which appears as the black, circular area in the image. Arrows show the two arms of the spiral structure around the star. Credit: NAOJ

2) A comparison of the fit between the theoretical model and observational data. The red dashed line represents the shape of the disk based on modeling from density wave theory. The image shows that the data conform to the predictions of the theory and supports an explanation for the development of the structure in terms of this theory’s model. Credit: NAOJ

3) A representation of how interaction between a protoplanetary disk and planet makes a density wave and affects the disk’s structure. A planet in the disk may be one explanation for the formation of the disk’s spiral structure. The basis for the simulation is a code in computational fluid dynamics called FARGO that simulates the flow of gases in motion. Colors indicate the surface density of the disk; the darkest colors show the areas with the least density while the white shows those with the greatest density.