Space-time is Not the Same for Everyone

Before the Big Bang, space-time as we know it did not exist. So how was it born? The process of creating normal space-time from an earlier state dominated by quantum gravity has been studied for years by theorists at the Faculty of Physics, University of Warsaw. Recent analyses suggest a surprising conclusion: not all elementary particles are subject to the same space-time.
Several billion years ago, in the era soon after the Big Bang, the Universe was so dense and so hot that elementary particles felt the existence of gravity strongly. For decades, physicists around the world have been attempting to discover the laws of quantum gravity describing this phase of the evolution of the Universe. Recently Professor Jerzy Lewandowski’s group at the Faculty of Physics, University of Warsaw (FUW) proposed its own model of the quantum Universe. Recent studies of its properties, discussed during the 20th International Conference on General Relativity and Gravitation (GR20), being held in Warsaw in conjunction with the 10th Edoardo Amaldi Conference on Gravitational Waves (Amaldi10), have surprised researchers. The analyses performed by Prof. Lewandowski and his PhD student Andrea Dapor show that different elementary particles “experience” the existence of different space-times.

Three years ago, Prof. Lewandowski’s group developed a consistent mathematical model of LQG that combines quantum mechanics with general relativity. The model assumes the existence of two interacting fields. One is a gravitational field, which can be identified with a space (since, according to the general theory of relativity, gravity warps space-time, and this curved space-time gives rise to gravitational effects). The second field in the model is a (scalar) field that assigns a number to each point in space. This field is interpreted as the simplest type of matter.

The image of reality in the model put forward by the Warsaw University physicists is quantum, and so has characteristics extremely different from those of the world we deal with every day. “In this situation, it seemed natural to ask: How does the space-time known to all of us emerge from the primary states of quantum gravity? And since normal space-time would be born as a result of the interaction between matter and quantum gravity, can we be certain that each type of matter definitely interacts with a space-time that has the same properties?,” says Prof. Lewandowski. 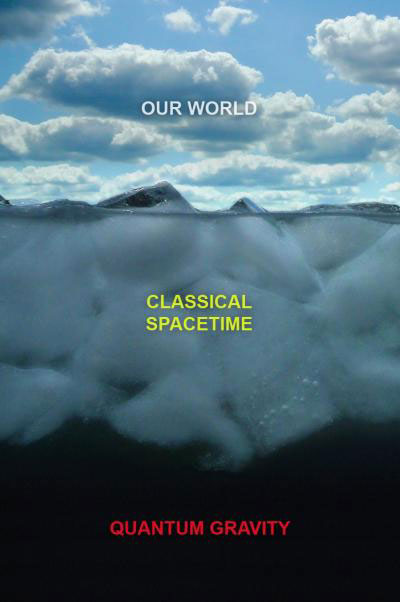 After deriving the equations representing the behaviour of particles in accordance with the laws of the quantum gravity model, FUW physicists started to check whether similar equations could be obtained with the use of ordinary space-time with different symmetries. For massless particles this turned out to be possible. The sought-for space-time was isotropic, i.e. it had the same properties in all directions.

“According to the simplified model we researched, regardless of whether the photon has greater momentum or less, more energy or less, space-time appears to it to be the same in all directions,” explains Prof. Lewandowski.

For particles with mass, the situation was different. The existence of mass imposes a specific additional condition on the theory. The FUW physicists showed that a classical space-time, which would simultaneously meet the mass condition and have the same properties in all directions, cannot be constructed. The appropriate space-time could be found only among anisotropic space-times. The preferred direction of these space-times was the particle’s direction of motion.

“Particles with mass not only experience different space-times than photons do, but each sees its own private version of space-time depending on the direction it moves in. This finding really took us by surprise,” says PhD student Andrea Dapor.

Does this latest discovery mean that the Universe of particles with mass is not isotropic? Such an assertion would be of huge experimental and observational importance. However, the answer is no, the Universe does not have a preferred direction. As observers studying the behaviour of elementary particles, we are classical, rather than quantum, systems and in a sense we are “outside” the particles’ world. It is not then important what each particle “experiences” of its space-time. Regardless of the direction of flight, all particles recorded in the laboratory will have exactly the same characteristics. For this reason, experimentally confirming the theoretical predictions of the FUW team will be no trivial task.

The work of Professor Lewandowski’s team was funded by grants from the Polish Ministry of Science and Higher Education and the Polish National Science Centre.

International Conferences on General Relativity and Gravitation are held every three years. This year, the twentieth conference (GR20), held in Warsaw on 7-13 July, has been combined with the 10th Edoardo Amaldi Conference on Gravitational Waves (Amaldi10). The combined conference GR20/Amaldi10 is an unprecedented event, attracting to Warsaw close to 900 of the greatest physicists working on all the areas of physics, mathematics and astronomy in which general relativistic effects may be relevant, including theories of quantum gravity and gravitational waves. The organizers of the combined conference are the Polish Society on Relativity and the University of Warsaw.

The International Conference on General Relativity and Gravitation was hosted in Poland for the second time. The third conference of this type, which took place between 25-31 July 1962, was held in Warsaw and Jabłonna. It was organized by the prominent Polish physicist Leopold Infeld, a colleague of Albert Einstein’s. Guests of the conference included such well-known physicists as Paul Dirac, Richard Feynman, John Archibald Wheeler and (those days unknown) Peter Higgs.

Physics and Astronomy first appeared at the University of Warsaw in 1816, under the then Faculty of Philosophy. In 1825 the Astronomical Observatory was established. Currently, the Faculty of Physics’ Institutes include Experimental Physics, Theoretical Physics, Geophysics, Department of Mathematical Methods and an Astronomical Observatory. Research covers almost all areas of modern physics, on scales from the quantum to the cosmological. The Faculty’s research and teaching staff includes more than 200 university teachers, of which close to 80 are employees with the title of professor. The Faculty of Physics, University of Warsaw, is attended by almost 1000 students and about 140 doctoral students.

The Polish Society on Relativity (PTR) consolidates the Polish relativistic community, promotes the achievements of Polish relativists worldwide and disseminates knowledge about the achievements of other communities in the field of relativity in Poland. The PTR’s most important activities provide Polish undergraduates, doctoral students and young scientists the best possible conditions to help start their own research at the highest level in the modern fields of relativistic physics and the mathematics of space-time. Honorary members of the Society include the eminent physicists Professor Abhay Ashtekar and Professor Roger Penrose.