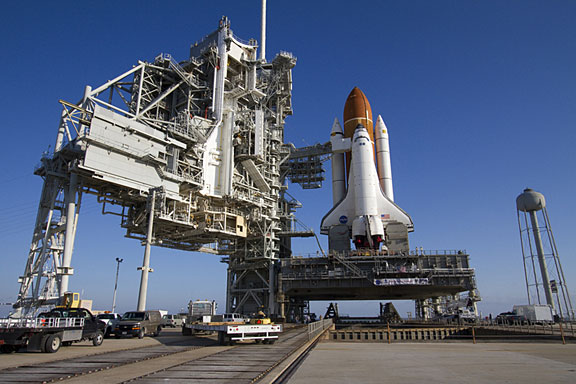 After safely reaching its launch pad at NASA’s Kennedy Space Center in Florida on March 11, space shuttle Endeavour now awaits the next major milestone for its upcoming flight to the International Space Station.

After safely reaching its launch pad at NASA’s Kennedy Space Center in Florida on March 11, space shuttle Endeavour now awaits the next major milestone for its upcoming flight to the International Space Station.

Reporters are invited to cover a launch dress rehearsal, known as the Terminal Countdown Demonstration Test (TCDT), scheduled at Kennedy from March 29 to April 1. Six astronauts are set to begin the STS-134 mission on April 19 for Endeavour’s final scheduled flight before it is retired.

Endeavour arrived at the pad on top of a giant crawler-transporter after leaving Kennedy’s Vehicle Assembly Building at 7:56 p.m. EST Thursday. It travelled less than 1 mph during the 3.4-mile journey and was secured on the launch pad at 3:49 a.m. Friday. TCDT will provide Endeavour’s astronauts and ground crews with an opportunity to participate in various simulated countdown activities, including equipment familiarization and emergency training.

To attend TCDT, international journalists must apply by 5 p.m. EDT on March 22 to allow time for processing. U.S. media representatives must apply by March 25. Reporters requesting accreditation must apply online at: https://media.ksc.nasa.gov

The following media events are associated with the test:

– March 29 – STS-134 crew arrival: The astronauts will arrive at the Shuttle Landing Facility and make a statement. The arrival will be broadcast live on NASA Television.

– March 31 – STS-134 crew media availability: The crew will take media questions at Launch Pad 39A. The session will be carried live on NASA TV.

– April 1 – STS-134 crew walkout photo opportunity: The astronauts will depart from the Operations and Checkout Building in their launch entry suits in preparation for the countdown demonstration test at the launch pad. The walkout will not be broadcast live, but will be part of the NASA TV Video File.

Times for media events associated with the test have not been finalized and will be announced at a later date. Updates for all events are available at 321-867-2525.

To attend crew arrival, reporters must pick up badges between 6 a.m. and 3 p.m. Tuesday, March 29, at the Kennedy Space Center Badging Office on State Road 405. For information about covering these events, including proper attire and meeting locations, credentialed media should visit: http://www.nasa.gov/centers/kennedy/news/media.html

The 14-day mission will be the 36th flight to the space station and the 25th flight for Endeavour. The STS-134 mission will deliver the Alpha Magnetic Spectrometer, a particle physics detector designed to search for various types of unusual matter by measuring cosmic rays. The STS-134 crew also will deliver the Express Logistics Carrier-3, a platform that carries spare parts to sustain station operations once the shuttles are retired later this year.

For more information about the STS-134 mission and crew, visit: http://www.nasa.gov/shuttle