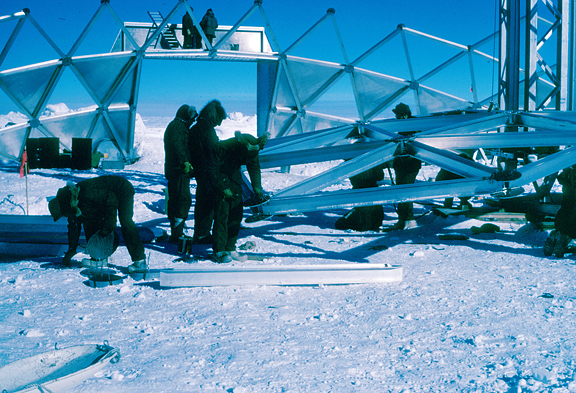 Photograph by: John Perry, U.S. Navy Seabee National Science Foundation Date Taken: Austral summer 1972 – 1973 Construction of the geodesic dome at Amundsen-Scott South Pole Station. Seabees erecting Top Assembly framing around the Central Erection Tower at snow level. The assembly is hoisted up the tower as struts are added to the outer strut ends. This enables the strut and gusset assembly work to be performed at snow level. Note: Seabees working on the main entrance framing of the Base Assembly in the background.

Photograph by: John Perry, U.S. Navy Seabee National Science Foundation Date Taken: Austral summer 1972 – 1973 Construction of the geodesic dome at Amundsen-Scott South Pole Station. Seabees erecting Top Assembly framing around the Central Erection Tower at snow level. The assembly is hoisted up the tower as struts are added to the outer strut ends. This enables the strut and gusset assembly work to be performed at snow level. Note: Seabees working on the main entrance framing of the Base Assembly in the background.

Michele Gentille, Antarctic Sun: It’s safe to say many visitors and temporary residents at the South Pole Station have sentimental feelings about the Dome that served as the second U.S. research station at 90 degrees south for more than 30 years.

Navy Seabees painstakingly assembled the geodesic structure in the 1970s after it arrived in crates as a “kit” of precut beams and aluminum pieces. For 30 years, a tiny village of moveable buildings sat under its protection, a vast umbrella measuring 164 feet wide and 52 feet high.

Now that the Elevated Station is completed and fully functioning, the Dome is scheduled for disassembly and removal, in accordance with the Antarctic Treaty, which requires that a minimum of human “footprints” be left on the most remote and undeveloped continent of our planet. 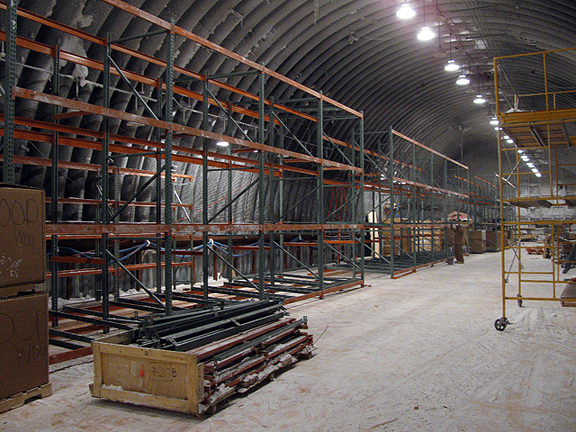 Photo Credit: Nathan Greenland Interior work for the new logistics arch facility at South Pole has been under way all winter long in the unheated building. The old Dome station has served as an ad hoc storage solution, but it will soon go away. Crews will start moving materials into the new facility this summer.

What will happen with this magnificent structure is still under discussion. One possibility involves preserving the top layer for a museum display in the U.S. Navy Seabee Museum External Non-U.S. government site at Port Hueneme, Calif. At this time, however, no final decisions have been made.

In the past few years, the Dome has functioned as a warehouse — in effect, a freezer unit for construction goods and food. Where will all these crates and boxes go when the building makes its final journey off the Ice?

A gigantic metal arch sits next to the Dome, built in preparation for this eventuality. At its apex, the structure is 30 feet high. Until this winter, it was virtually a shell, an unfinished structure awaiting customization. Now a skeleton crew of two carpenters and two electricians is transforming the arch, locally referred to as the L.O. (logistics office), into an enormous warehouse fitted with lighting and shelving to handle the stores currently in the Dome and more.

The winter ambient temperate in the L.O. is minus 60 degrees Fahrenheit — extreme cold to be sure — but the arch provides an environment the craftsmen can feasibly work in, as it keeps out the wind.

Still, the job is challenging. Fiddling with thousands of nuts and bolts to erect shelving while wearing insulating liners under bulky leather gloves can be frustrating. Regular breaks are needed to warm frigid fingers inside the warmth of the small office that sits at one end of the building.

Todd Adams, one of the winter-over carpenters, describes the racks that will line the arch. Like the Dome itself, they arrived unassembled in wooden crates, basically a collection of steel beams and vertical supports that require expert handling.

“They are the kind of pallet racks you would see in a big shopping warehouse such as Costco,” he says. “The difference here is they are designed to slide back and forth on bearings and can be stored two deep. The highest shelf will be 16 feet above the ground and each will hold a crate about the size of a tri-wall, or four- to five-foot cubes.”

Bill Stiner, also wintering at Pole as a carpenter this year, describes how he goes about assembling one of these racks, which are nine feet wide, eight feet deep, and the equivalent of nearly two stories high.

“It’s like putting together a gigantic Erector Set,” he says. “Some parts clip together and other parts need to be bolted together. The units work like a set of drawers installed on angled hardware for efficient movement.”

But even before the carpenters could address this task, there had to be light inside the arch. At the beginning of winter, the only source of illumination was a 20-foot-square doorway that let in sunlight. Plans called for installation of 150 overhead lamps, a task that many construction professionals familiar with the challenges down here doubted could happen over the long, dark, frigid season. 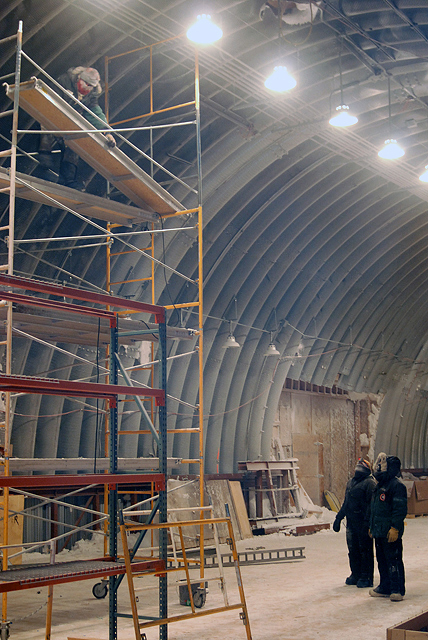 Nevertheless, Monty Myrtle, the main electrician on station, has nearly finished wiring and hanging all the lights, working on 24-foot-high scaffolds in full extreme weather gear to accomplish the task. He also thought of a way to improve the original wiring concept to conserve energy, a precious resource at Pole, where we are completely reliant on expensive fossil fuel to survive.

“The lights are installed in three rows down the length of the arch,” he says. “The original idea was to wire 14 lights to one switch so you could turn on just one row as needed. However, these are pretty powerful units; each bulb is 300 watts. I put in 50 light switches so you can now turn on between three and seven lamps with just one switch.”

The logistics of running insulated wire along a 300-foot portion of the building in sub-zero temperatures is mind-boggling, and Myrtle needed the assistance of volunteers to complete the “wire pulls.”

Groupings of five wires are pulled through protective piping that can run between 75 and 250 feet each. No one person is strong enough to manage such a task, so Myrtle employs a special “tugger” machine. One person feeds the wire into the pipe while applying lubricant, and several more helpers control the remaining length of wire to ensure there are no kinks or knots.

Work has to happen steadily but quickly, since such low temperatures make the wire very rigid and, of course, have an effect on the hands that work with it. In the end, it takes between six and eight workers to complete one wire pull, which will last 2 1/2 hours from beginning to end. The L.O. arch required 14 pulls altogether.

One of the simplest but most confounding mysteries is how a thin shell of glass that makes up a light bulb can survive months of extremely low temperatures.

Robert Dragonfly, the winter-over foreman electrician and fire technician on station, explains, “It is the fast change of temperature that poses any real problem. As long as the bulb has time to heat up on its own, it will work fine, although the added stress will cut the life of the bulb down considerably. The tragedy happens when a warm, lit bulb is exposed to cold snow or ice falling on it. That creates an explosion. But this is not an issue in the L.O., where there is a roof to protect the lights from extreme elements.”

The transfer of cargo from under the Dome to the L.O. will occur at the beginning of summer, paving the way for the demolition of the Dome. The end of an era.