On June 7, 2011, our Sun erupted, blasting tons of hot plasma into space. Some of that plasma splashed back down onto the Sun’s surface, sparking bright flashes of ultraviolet light. This dramatic event may provide new insights into how young stars grow by sucking up nearby gas.
The eruption and subsequent splashdown were observed in spectacular detail by NASA’s Solar Dynamics Observatory. This spacecraft watches the Sun 24 hours a day, providing images with better-than-HD resolution. Its Atmospheric Imaging Assembly instrument was designed and developed by researchers at the Harvard-Smithsonian Center for Astrophysics (CfA).

“We’re getting beautiful observations of the Sun. And we get such high spatial resolution and high cadence that we can see things that weren’t obvious before,” says CfA astronomer Paola Testa.

Movies of the June 7th eruption show dark filaments of gas blasting outward from the Sun’s lower right. Although the solar plasma appears dark against the Sun’s bright surface, it actually glows at a temperature of about 18,000 degrees Fahrenheit. When the blobs of plasma hit the Sun’s surface again, they heat up by a factor of 100 to a temperature of almost 2 million degrees F. As a result, those spots brighten in the ultraviolet by a factor of 2 – 5 over just a few minutes. 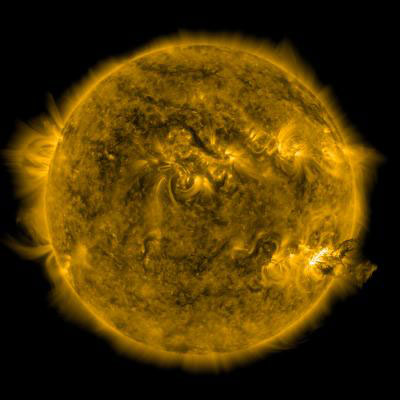 The tremendous energy release occurs because the in falling blobs are traveling at high speeds, up to 900,000 miles per hour (400 km/sec). Those speeds are similar to the speeds reached by material falling onto young stars as they grow via accretion. Therefore, observations of this solar eruption provide an “up close” view of what happens on distant stars.

“We often study young stars to learn about our Sun when it was an ‘infant.’ Now we’re doing the reverse and studying our Sun to better understand distant stars,” notes Testa.

These new observations, combined with computer modeling, have helped resolve a decade-long argument over how to measure the accretion rates of growing stars. Astronomers calculate how fast a young star is gathering material by observing its brightness at various wavelengths of light, and how that brightness changes over time. However, they got higher estimates from optical and ultraviolet light than from X-rays.

The team discovered that the ultraviolet flashes they observed came from the in falling material itself, not the surrounding solar atmosphere. If the same is true for distant, young stars, then by analyzing the ultraviolet light they emit, we can learn about the material they are accreting.

“By seeing the dark spots on the Sun, we can learn about how young stars accrete material and grow.” explains Testa.