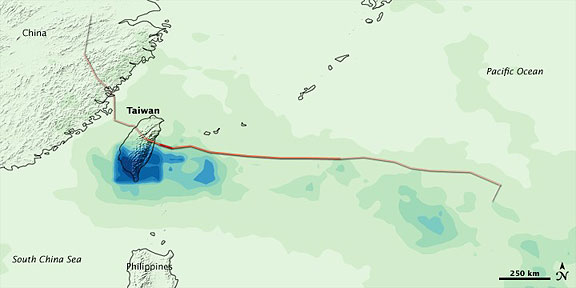 Though its winds were not particularly powerful when it made landfall in Tawian, slow-moving Typhoon Morakot soaked the southern part of the island with heavy rain between August 3 and 9, 2009. The water-soaked ground slid off the sides of mountains, generating deadly landslides. The largest slide occurred in the southern mountains of Taiwan; as of August 10, at least a hundred people were still missing.

Scientists at NASA’s Goddard Space Flight Center produced an image of the rainfall accumulation along Morakot’s path through the western Pacific and is based on estimates from the near-real-time, Multi-satellite Precipitation Analysis. The analysis depends on data from the Tropical Rainfall Measuring Mission satellite. Increasing storm intensity (beginning with Tropical Depression) is indicated by darker shades of red. Morakot intensified to Category 2 strength prior to landfall. Highest rainfall totals (greater than 900 millimeters, or about 34 inches) are dark blue, and they are concentrated over the mountains of southern Taiwan. According to BBC news, the flooding in Taiwan is the worst in 50 years.