Signs of an Unearthly Spring 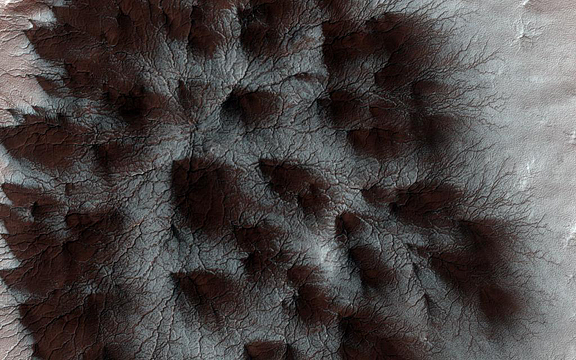 New images from the UA-led HiRISE experiment detail patterns of dust carried by gas from beneath the seasonal ice cap. The High Resolution Imaging Experiment, or HiRISE, run from The University of Arizona, is seeing signs of spring on Mars. The signs are absolutely martian and unearthly.

New images from the UA-led HiRISE experiment detail patterns of dust carried by gas from beneath the seasonal ice cap. The High Resolution Imaging Experiment, or HiRISE, run from The University of Arizona, is seeing signs of spring on Mars. The signs are absolutely martian and unearthly.

The HiRISE team today (March 25) released new high-resolution images of terrain at Mars’ south polar region taken last month by their camera aboard NASA’s Mars Reconnaissance Orbiter. The images can be viewed on the HiRISE Website.

“Spring on Mars is quite different from spring on Earth because Mars has not just permanent ice caps, but also seasonal polar caps of carbon dioxide, familiar to us on Earth as dry ice,” said HiRISE deputy principal investigator Candice J. Hansen-Koharcheck of the NASA Jet Propulsion Laboratory in Pasadena, Calif.

The seasonal polar caps form each winter because carbon dioxide in the atmosphere changes directly to frost, which builds into a dry ice layer over Mars’ surface. Dry ice caps can be as much as a meter thick, Hansen-Koharcheck said.

The seasonal ice cap thins both from the top and the bottom.

“What happens on Mars, we think, is that as the seasonal ice cap thins from the bottom, gas underneath the cap builds up pressure,” Hansen-Koharcheck said. “And where gas under the ice finds a weak spot or a crack, it will flow out of the opening, often carrying a little dust from the surface below.”

That pressure buildup beneath the carbon-dioxide ice is a key difference between this process and springtime thawings of frozen water on Earth. When warmed, water ice and snowpacks on Earth can melt to liquid and either run off beneath the frozen layer or soak into the ground.

One HiRISE image released today shows fan-shaped deposits of dust that form beautiful starburst patterns. The dust was carried from beneath the seasonal ice cap by jets of carbon dioxide escaping from radial troughs, often called “spiders,” because of their shape.

Another HiRISE image released today shows how dust that has been carried to the surface by gas jetting through the ice cap is blown about by prevailing winds before settling in fan-shaped deposits atop the ice cap.

Many jets appear to be active at the same time, according to this picture, because numerous fans are all deposited in the same direction.

She estimated that the ice cap seen in the images is about a half-meter thick.

Mars Reconnaissance Orbiter is managed by NASA’s Jet Propulsion Laboratory, a division of the California Institute of Technology, for the NASA Science Mission Directorate. Lockheed Martin Space Systems, based in Denver, is the prime contractor and built the spacecraft. Ball Aerospace and Technologies Corp., of Boulder, Colo., built the HiRISE camera.