For the Radar instrument, one of the most significant Titan fly-bys of the extended Solstice mission occurs July 10. Measurements from this flyby, combined with data from the previous flyby, will allow scientists to produce stereo images of lakes.
Inbound, the imaging science subsystem (ISS) will acquire a mosaic of high northern latitudes on Titan’s leading hemisphere, approaching northern summer. This area of Titan’s surface has only recently been well observed and each new flyby adds significantly to our data set.

In addition, on the inbound path, the visible and infrared mapping spectrometer (VIMS) will observe the north polar area and will continue to monitor the evolution of cloud systems.
Outbound, VIMS is prime at about one and a half hours after closest approach and will acquire a mosaic over the southern mid-latitude terrains south of the regions Adiri and Belet with instrument resolution starting at three miles (five kilometers) per pixel. 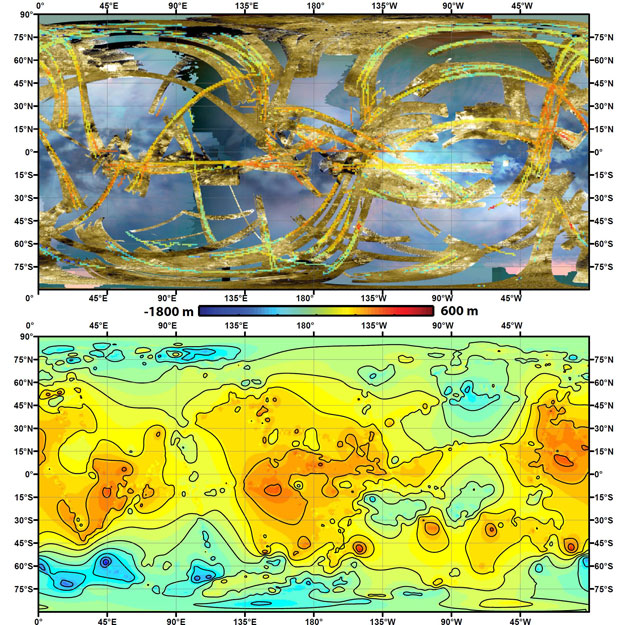 Two views of Titan’s topography: To create the first global, topographic map of Saturn’s moon Titan, scientists analyzed data from NASA’s Cassini spacecraft and a mathematical process called splining. This method effectively uses smooth curved surfaces to “join” the areas between grids of existing topography profiles obtained by Cassini’s radar instrument. In the upper panel of this graphic, gold colors show where radar images have been obtained over almost half of Titan’s surface. Within the gold areas, narrow strips of rainbow colors show where height data have been obtained. Those data are laid over a blue-toned, near-global map of infrared color from the Cassini visual and infrared mapping spectrometer instrument. The lower panel shows the new topography map, with contour lines added at 656 feet (200 meters) apart in elevation. South polar depressions and four mountains are notably prominent; a dark region at 50 to 65 degrees south latitude and 0 to 60 degrees east longitude coincides with a major depression. The radar and VIMS data were obtained from 2004 to 2011. Credit: NASA/JPL-Caltech/ASI/JHUAPL/Cornell/Weizmann