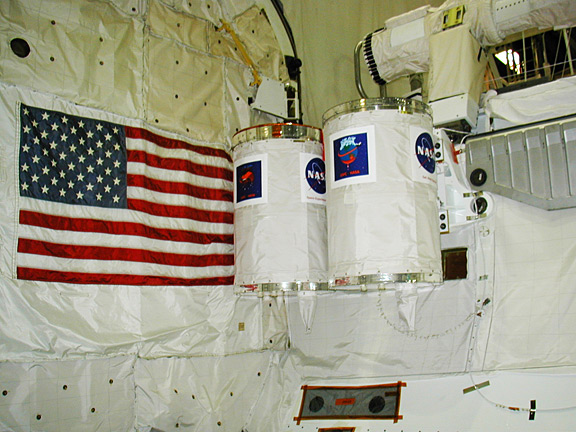 Hooks and power buses built into the shuttle bays allowed hundreds of small, modular experiments and technology test units to make the best use of missions that didn’t need all 50,000 pounds of payload capacity. Between 1982 and 2003, more than 200 of these projects, including Get-Away Special (GAS) Cannisters, Hitchhikers and Spartans, flew in 108 missions.

The program offered an invaluable proving ground for science and technology as well as for a large contingent of young scientists and engineers who came to Goddard in the early 1980s and grew up here working with small payloads. The Shuttle Small Payloads Project became one of NASA’s most fertile nurturing grounds as well as one of NASA’s most economically and technically successful programs. Many of these investigators rose to positions of authority, shaping the course of NASA science and exploration.

“In terms of ride-share opportunities, we know what the formula for success is and we’re currently working with Marshall space flight center to ensure some funding for small mission capability on NASA’s heavy-lift vehicle.”

– Mike Weiss, Project Manager for the Exporations Systems Projects “Back then the SSPP, and the other projects in the Special Payloads Division (SPD), operated in a skunk-works type of atmosphere,” said Gerry Daelemans, now Project Formulations Manager for the Earth Science Program Office and Landsat 9. “Young people gravitated to it. There were a lot of different projects in the SPD – we had the original Small Explorers (SMEX) Project, the Shuttle based Spartan Project, the PegSat Project. A lot of people got a lot of really good engineering and management experience in a short period of time. There was a lot of cross-fertilization of training on a lot of different small and quick missions, all of which flew in less than three years. Today nobody would dream of that.”

Many missions could be approved to fly in two years from conception – mere months for a second flight if the experimenter was ready, Daelemans said. “You could risk failing, because if you did, we could just re-fly you.”

To Earth Orbit – and Beyond

However, to get the more detailed data needed to learn how to assess landing sites and surfaces of other planets, he needed to experiment with LIDAR in Earth orbit.

“Mapping Mars allowed us to have confidence to fly these kind of missions,” Garvin said of the Shuttle Laser Altimeter missions (SLA I and SLA II: Jan. 1996 and Aug. 1997)). “What it did for us was show what we could actually do for Earth science.”

He got his chance in 1996 aboard STS 72 on Endeavour. Their first topographic profiles showed the peak of Mauna Kea, Hawaii, one of the largest volcanoes on earth.

Later, Garvin and the SLA team noticed peculiar surface height distributions in the data. “We started getting these booming echoes that turned out to be the tops of trees, and smaller returns from the ground underneath,” he said. “We realized we could use this method to measure the biomass of the planet.” Individual signals teased out of the apparent noise also allowed them to measure the difference between glacier top surfaces and the ground beneath – technology and methods adapted for the IceSat-1 and Operation Ice Bridge missions.

“The legacy of those experiments was the proving ground for what we have since accomplished in developing these LIDAR instruments for other planets,” Garvin said. “Everyone who worked on this project went on to really make a contribution to science.”

Beyond Technology – Growing Up at Goddard

Small payloads work exposed many Goddard engineers and managers to the larger agency, said Joann Baker. She started in 1983 working with Get Away Special (GAS) cannisters.

“It was exciting because I got to go integrate payloads in the actual Shuttle bay. I learned a lot about safety. I presented safety information to the broader agency. We got a lot of inter-center interaction that way,” she said.

These opportunities and responsibilities boosted the career trajectories of many Goddard leaders.

“That was a powerful experience. It gave me a lot of confidence and experience that in other larger, more structured organizations would have taken many more years to garner that level of experience,” said Craig Tooley. He calls his start as a mechanical engineer in the Special Payloads Division at Goddard in 1983 the “luckiest thing” that ever happened to him. “We were kind of thrust into it.”

He went on to manage the Lunar Reconnaissance Orbiter (LRO) mission and is now the Magnetospheric Multiscale (MMS) mission Flight Project Manager.

The program was also open to students and institutions outside NASA, and many of those investigators drew big achievements from their small payloads, said Dr. Ruthan Lewis, who helped manage multiple SSPP missions.

“Engaging and inspiring students was very exciting,” she said. “To watch these students start from near zero experience, and just see their wonderment, their sense of, ‘Wow, I flew my experiment in space, and I learned so much from it.’ That was just incredible.”

Goddard engineers and managers are working to ensure low-cost access to space for science and technology payloads remains an agency priority.

“Once a program matures and requirements get established, it’s difficult to introduce new ideas,” Lewis said.