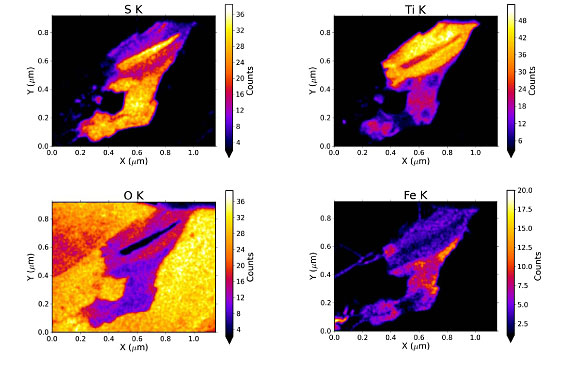 NASA and co-researchers from the United States, South Korea and Japan have found a new mineral named “Wassonite” in one of the most historically significant meteorites recovered in Antarctica in December 1969.

NASA and co-researchers from the United States, South Korea and Japan have found a new mineral named “Wassonite” in one of the most historically significant meteorites recovered in Antarctica in December 1969.

The new mineral was discovered within the meteorite officially designated Yamato 691 enstatite chondrite. The meteorite was discovered the same year as other landmark meteorites Allende and Murchison and the return of the first Apollo lunar samples. The study of meteorites helps define our understanding of the formation and history of the solar system.

The meteorite likely may have originated from an asteroid orbiting between Mars and Jupiter. Wassonite is among the tiniest, yet most important, minerals identified in the 4.5-billion-year-old sample. The research team, headed by NASA space scientist Keiko Nakamura-Messenger, added the mineral to the list of 4,500 officially approved by the International Mineralogical Association.

“Wassonite is a mineral formed from only two elements, sulfur and titanium, yet it possesses a unique crystal structure that has not been previously observed in nature,” said Nakamura-Messenger.

In 1969, members of the Japanese Antarctic Research Expedition discovered nine meteorites on the blue ice field of the Yamato Mountains in Antarctica. This was the first significant recovery of Antarctic meteorites and represented samples of several different types. As a result, the United States and Japan conducted systematic follow-up searches for meteorites in Antarctica that recovered more than 40,000 specimens, including extremely rare Martian and lunar meteorites.

Researchers found Wassonite surrounded by additional unknown minerals that are being investigated. The mineral is less than one-hundredth the width of a human hair or 50×450 nanometers. It would have been impossible to discover without NASA’s transmission electron microscope, which is capable of isolating the Wassonite grains and determining their chemical composition and atomic structure.

“More secrets of the universe can be revealed from these specimens using 21st century nano-technology,” said Nakamura-Messenger.

The new mineral’s name was approved by the International Mineralogical Association. It honors John T. Wasson, professor at the University of California, Los Angeles (UCLA). Wasson is known for his achievements across a broad swath of meteorite and impact research, including the use of neutron activation data to classify meteorites and to formulate models for the chemical makeup of bulk chondrites.

“Meteorites, and the minerals within them, are windows to the formation of our solar system,” said Lindsay Keller, space scientist at NASA’s Johnson Space Center in Houston. Keller is the co-discoverer and principal investigator of the microscope used to analyze the Wassonite crystals. “Through these kinds of studies we can learn about the conditions that existed and the processes that were occurring then.”

Johnson’s advanced work in nanotechnology is part of the center’s Astromaterial Research and Exploration Science Directorate. It is currently the location for celestial materials that would be returned to Earth from spacecraft. The facility collaborates with industry, academic and international organizations.

“The beauty of this research is that it really demonstrates how the Johnson Space Center has become a pre-eminent leader in the field of nanoscale analysis,” said Simon Clemett, a space scientist at Johnson and co-discoverer of the new mineral. “In the words of the great English poet William Blake, we are now able ‘to see the world in a grain of sand’.

Collaborators in the discovery of the new mineral include Clemett, Keller and Zia Rahman in the Astromaterials Research and Exploration Science Directorate at Johnson; Alan Rubin from UCLA; Byeon-Gak Choi from Seoul National University, South Korea; Shouliang Zhang from the Lunar and Planetary Institute in Houston; and Katsunari Oikawa from Tohoku University, Japan.