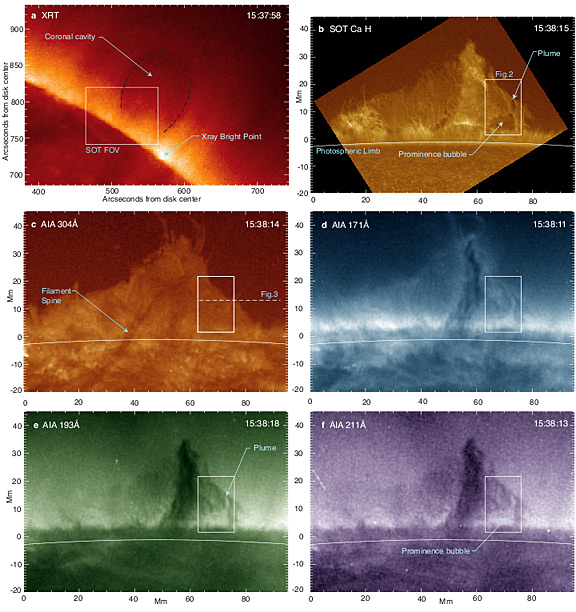 Coronal Mass Ejections (CMEs) are violent solar explosions that can propel up to 10 billion tons of the Sun’s atmosphere — at a million miles an hour — out through the corona and into space. These fast, powerful ejections can take as little as 18 hours to reach Earth and give rise to geomagnetic storms, which can disrupt radio transmissions, induce large currents in power lines and oil pipelines, seriously disrupt spacecraft, and be extremely hazardous to astronauts. New instruments on advanced spacecraft have provided fresh insight into these cataclysmic phenomena and illuminated a path toward predicting space weather.

Coronal Mass Ejections (CMEs) are violent solar explosions that can propel up to 10 billion tons of the Sun’s atmosphere — at a million miles an hour — out through the corona and into space. These fast, powerful ejections can take as little as 18 hours to reach Earth and give rise to geomagnetic storms, which can disrupt radio transmissions, induce large currents in power lines and oil pipelines, seriously disrupt spacecraft, and be extremely hazardous to astronauts. New instruments on advanced spacecraft have provided fresh insight into these cataclysmic phenomena and illuminated a path toward predicting space weather.

In a paper published today in the journal Nature, researchers from the Solar and Astrophysics Laboratory (LMSAL) of the Lockheed Martin Advanced Technology Center (ATC), along with colleagues at the Harvard-Smithsonian Center for Astrophysics, Kyoto University, and the High Altitude Observatory of the National Center for Atmospheric Research (which is sponsored by the National Science Foundation), have discovered a turbulent convective flow system in solar “quiescent” prominences suspended in the corona — the Sun’s outer atmosphere — that point to a mechanism by which hot coronal plasma (and presumably magnetic flux) are injected upwards into the coronal cavity system. Coronal cavities are large magnetic flux ropes suspended in the corona, typically in the polar regions of the Sun. These flux ropes all eventually erupt in the form of CMEs that can impact the interplanetary and terrestrial space environments.

“How these large flux ropes erupt is a poorly understood fundamental process in the science of space weather. Our discovery points to a way in which intermittent ‘bubbles’ in solar prominences can inject new mass and magnetic flux into the flux ropes, thus slowly building up their magnetic buoyancy over time. These ‘bubbles’, which can be as wide as several Earth diameters, are analogous to the blobs of material in a Lava Lamp that are heated by a light from below, become buoyant, and rise to the top to deposit their energy, then drop back down again. By this mechanism coronal cavity flux ropes could grow slowly until they are able to exceed the ‘tethering’ forces of overlying magnetic fields and thus erupt as CMEs,” said Dr. Thomas Berger, lead author of the Nature paper, and solar physicist at the Lockheed Martin Solar and Astrophysics Lab at the ATC. “If we can show in further research that the prominence bubbles are indeed magnetic flux emergence events taking place below prominences, we can verify that we’ve found a new mechanism for transferring magnetic flux from the convection zone into the corona, and perhaps establish a predictive tool for the eruption of CMEs based on the rate of observed flux injection.”

The researchers used observations from the Atmospheric Imaging Assembly (AIA) on NASA’s recently launched Solar Dynamics Observatory (SDO) and NASA’s Focal Plane Package for the Solar Optical Telescope (SOT) on the Japanese Hinode satellite. Both instruments were designed and built at the ATC.

It was the high spatial and temporal resolution of SOT, combined with the broad temperature coverage of AIA, that unlocked the mystery. SOT movies from 2006 to 2009 reveal dark “bubbles” forming below 10,000 K prominence material. These bubbles go unstable and form turbulent upflow plumes that rise into the prominence and the 1,000,000 K “coronal cavity” above the prominence. SOT images alone couldn’t identify the source of the bubbles’ buoyancy — was it magnetic field concentration or thermal energy that led to the buoyancy relative to the heavy prominence above? In August 2010, using a simultaneous prominence observation by SOT and the newly launched AIA instrument suite, Berger and his team discovered that the bubbles were heated to temperatures of at least 250,000 K and more likely 1,000,000 K before rising into the prominence. This is 25-100 times hotter than the overlying prominence and implies that in addition to any magnetic buoyancy in the system, there is significant thermal buoyancy as well.

“This discovery is significant because it revises the common view that the magnetic field in the corona dominates the gas pressure and allows only simple, laminar flows along magnetic field lines. Here we establish that the prominence bubbles and resultant plumes are a form of the Rayleigh-Taylor instability, a buoyant turbulent flow system that, combined with the cool downflowing plasma in quiescent prominences, represents a form of convection, or overturning motion in the prominence/corona system — the first confirmed discovery of convection in the solar outer atmosphere,” added Berger. “It is apparent that our understanding of basic forces at work in the corona must be revised to include turbulent motions that can deform the magnetic field lines and produce novel flow and mixing systems.”

The Solar and Astrophysics Laboratory at the ATC conducts basic research into understanding and predicting space weather and the behavior of our Sun including its impacts on Earth and climate. It has a 47-year-long heritage of spaceborne solar instruments including the Soft X-ray Telescope on the Japanese Yohkoh satellite, the Michelson Doppler Imager on the ESA/NASA Solar and Heliospheric Observatory, the solar telescope on NASA’s Transition Region and Coronal Explorer, the Focal Plane Package on the Japanese Hinode satellite, the Solar X-ray Imagers on GOES-N, -O and -P, the Extreme Ultraviolet Imager instruments on NASA’s twin STEREO spacecraft, and the Helioseismic and Magnetic Imager and the Atmospheric Imaging Assembly on NASA’s Solar Dynamics Observatory. The ATC is currently building both the science instrument and spacecraft for NASA’s Interface Region Imaging Spectrometer (IRIS), a Small Explorer Mission scheduled for launch in late 2012.

Headquartered in Bethesda, Md., Lockheed Martin is a global security company that employs about 132,000 people worldwide and is principally engaged in the research, design, development, manufacture, integration and sustainment of advanced technology systems, products and services. The Corporation’s 2010 sales from continuing operations were $45.8 billion.