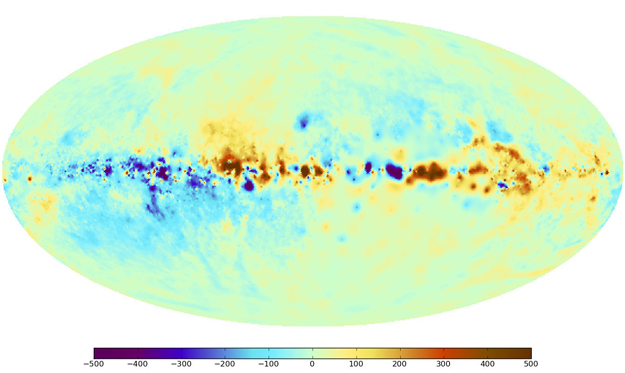 Scientists at the Naval Research Laboratory (NRL) are part of an international team that has pooled their radio observations into a database, producing the highest precision map to date of the magnetic field within our own Milky Way galaxy.

Scientists at the Naval Research Laboratory (NRL) are part of an international team that has pooled their radio observations into a database, producing the highest precision map to date of the magnetic field within our own Milky Way galaxy.

The team, led by the Max Planck Institute for Astrophysics (MPA), used the database they created and were able to apply information theory techniques to produce the map, explains NRL’s Dr. Tracy Clarke, a member of the research team. “The key to applying these new techniques is that this project brings together over 30 researchers with 26 different projects and more than 41,000 measurements across the sky. The resulting database is equivalent to peppering the entire sky with sources separated by an angular distance of two full moons.” This incredible volume of data results in a new, unique all-sky map that gives scientists the ability to measure the magnetic field structure of the Milky Way in unparalleled detail.

The map shows scientists a quantity known as Faraday depth, a concept that depends on magnetic fields along a specific line of sight. The research team created the map by combining the more than 41,000 individual measurements using a unique image reconstruction technique. The researchers at MPA are specialists in the new discipline of information field theory. Dr. Tracy Clarke, working in NRL’s Remote Sensing Division, is part of the team of international radio astronomers who provided the radio observations for the database. The new, high-precision map not only shows the galactic magnetic field’s structure on large scales, it also reveals small-scale features that help scientists better understand turbulence in the galactic gas.

For 150 years, scientists have measured cosmic magnetic field by observing the Faraday effect. They know that when polarized light passes though a magnetized medium, the plane of polarization turns. This concept is called Faraday rotation. The strength and direction of the magnetic field governs the amount of rotation that occurs. So scientists observe the rotation to investigate the magnetic fields’ properties.

Radio astronomers study the polarized light from distant radio source, passing through the Milky Way on the way to Earth, in order to measure our galaxy’s magnetic field. By measuring the polarization of the light sources at different frequencies, researchers can determine the amount of Faraday rotation.

With these individual measurements, researchers gain data about only a single path through the galaxy. To gain a fuller picture of the Milky Way’s magnetic fields from the Faraday rotation measurements, researchers have to observe many sources across the sky. To achieve this map, radio astronomers from around the world have pooled data from 26 different projects, collecting a total of 41,330 individual measurements. The map contains approximately one radio source per square degree of sky.

Despite this large catalog of date, there are still some large areas, especially in the southern sky, where only a few measurements have been recorded. So to gain a realistic map of the entire sky, researchers have to interpolate between the existing data points that they do have recorded.

There are some difficulties in obtaining the map data this way. First, the accuracy of the various measurements varies greatly although the more exact measurements should have the greatest influence. However scientists are not certain exactly how reliable any single measurement is in providing dependable information about the environment around it. Therefore more accurate measurements are not always given the highest priority.

There is also the problem of the uncertainty of the measurements simply because the process for obtaining the measurements is highly complex. A seemingly small error can impact the data in a significant way, leading to a distorted map.

To address these problems, the MPA scientists have developed an algorithm used to reconstruct the images. This algorithm, called the “extended critical filter,” uses tools provided by the new discipline known as information field theory. Information field theory, which uses logical and statistical methods applied to fields, is an effective tool for dealing with erroneous information. Besides astronomy these tools can be used in fields such as medicine or geography for a range of image and signal-processing applications.

While the new map is particularly important for studying our own galaxy, researchers will also be able to use it for future studies for extragalactic magnetic fields. This is possible because the scientists will use the new map to help them account for the galactic contribution to observed Faraday rotation. In the near future astronomers are looking toward a new generation of radio telescopes, such as LOFAR, eVLA, ASKAP, MeerKAT and the SKA that will provide an abundance of measurements of the Faraday effect. With this new data, researchers will be able to provide updates to the image of the Faraday sky, and perhaps someday understand the origin of the galactic magnetic fields.

Fig. 2: The uncertainty in the Faraday map. Note that the range of values is significantly smaller than in the Faraday map (Fig. 1). In the area of the celestial south pole, the measurement uncertainties are particularly high because of the low density of data points.

Fig. 3: In this map of the sky, a correction for the effect of the galactic disk has been made in order to emphasize weaker magnetic field structures. The magnetic field directions above and below the disk seem to be diametrically opposed, as indicated by the positive (red) and negative (blue) values. An analogous change of direction takes place across the vertical center line, which runs through the center of the Milky Way.

The U.S. Naval Research Laboratory is the Navy’s full-spectrum corporate laboratory, conducting a broadly based multidisciplinary program of scientific research and advanced technological development. The Laboratory, with a total complement of nearly 2,500 personnel, is located in southwest Washington, D.C., with other major sites at the Stennis Space Center, Miss., and Monterey, Calif. NRL has served the Navy and the nation for over 85 years and continues to meet the complex technological challenges of today’s world. For more information, visit the NRL homepage or join the conversation on Twitter, Facebook, and YouTube.