Astronomers have discovered a distant quasar illuminating a vast nebula of diffuse gas, revealing for the first time part of the network of filaments thought to connect galaxies in a cosmic web.

CREDIT: S. CANTALUPO (UCSC); JOEL PRIMACK (UCSC); ANATOLY KLYPIN (NMSU) Computer simulations suggest that matter in the universe is distributed in a “cosmic web” of filaments, as seen in the image above from a large-scale dark-matter simulation (Bolshoi simulation, by Anatoly Klypin and Joel Primack). The inset is a zoomed-in, high-resolution image of a smaller part of the cosmic web, 10 million light-years across, from a simulation that includes gas as well as dark matter (credit: S. Cantalupo). The intense radiation from a quasar can, like a flashlight, illuminate part of the surrounding cosmic web (highlighted in the image) and make a filament of gas glow, as was observed in the case of quasar UM287.

Researchers at the University of California, Santa Cruz, led the study, published January 19 in the journal Nature.

Using the 10-meter Keck I telescope at the W. M. Keck Observatory in Hawaii, the researchers detected a very large, luminous nebula of gas extending about 2 million light-years across intergalactic space.

“This is a very exceptional object: it’s huge, at least twice as large as any nebula detected before, and it extends well beyond the galactic environment of the quasar,” said Sebastiano Cantalupo, first author of the paper and a postdoctoral fellow at UC Santa Cruz.

The standard cosmological model of structure formation in the universe predicts that galaxies are embedded in a cosmic web of matter, most of which (about 84 percent) is invisible dark matter. This web is seen in the results from computer simulations of the evolution of structure in the universe, which show the distribution of dark matter on large scales, including the dark matter halos in which galaxies form and the cosmic web of filaments that connect them. Gravity causes ordinary matter to follow the distribution of dark matter, so filaments of diffuse, ionized gas are expected to trace a pattern similar to that seen in dark matter simulations.

Until now, these filaments have never been seen. Intergalactic gas has been detected by its absorption of light from bright background sources, but those results don’t reveal how the gas is distributed. In this study, the researchers detected the fluorescent glow of hydrogen gas resulting from its illumination by intense radiation from the quasar. 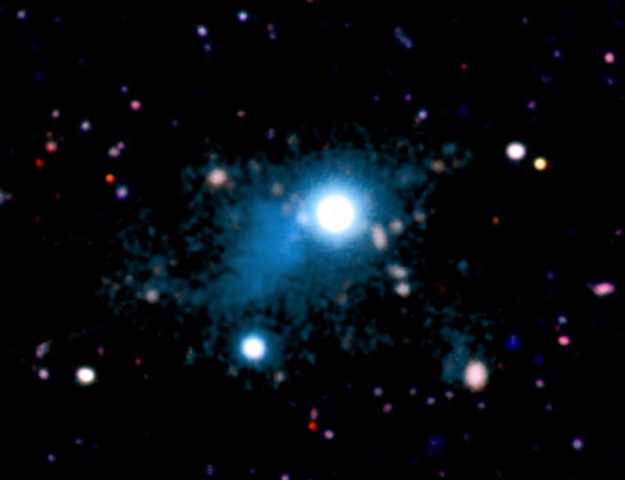 CREDIT: S. CANTALUPO, UCSC This deep image shows the nebula (cyan) extending across 2 million light-years that was discovered around the bright quasar UM287 (at the center of the image). The energetic radiation of the quasar makes the surrounding intergalactic gas glow, revealing the morphology and physical properties of a cosmic web filament. The image was obtained at the W. M. Keck Observatory.

“This quasar is illuminating diffuse gas on scales well beyond any we’ve seen before, giving us the first picture of extended gas between galaxies,” said J. Xavier Prochaska, coauthor and professor of astronomy and astrophysics at UC Santa Cruz. “It provides a terrific insight into the overall structure of our universe.”

The hydrogen gas illuminated by the quasar emits ultraviolet light known as Lyman alpha radiation. The distance to the quasar is so great (about 10 billion light-years) that the emitted light is “stretched” by the expansion of the universe from an invisible ultraviolet wavelength to a visible shade of violet by the time it reaches the Keck telescope and the LRIS spectrometer used for this discovery. Knowing the distance to the quasar, the researchers calculated the wavelength for Lyman alpha radiation from that distance and built a special filter for LRIS to get an image at that wavelength.

“We have studied other quasars this way without detecting such extended gas,” Cantalupo said. “The light from the quasar is like a flashlight beam, and in this case we were lucky that the flashlight is pointing toward the nebula and making the gas glow. We think this is part of a filament that may be even more extended than this, but we only see the part of the filament that is illuminated by the beamed emission from the quasar.”

A quasar is a type of active galactic nucleus that emits intense radiation powered by a supermassive black hole at the center of the galaxy. In an earlier survey of distant quasars using the same technique to look for glowing gas, Cantalupo and others detected so-called “dark galaxies,” the densest knots of gas in the cosmic web. These dark galaxies are thought to be either too small or too young to have formed stars.

“The dark galaxies are much denser and smaller parts of the cosmic web. In this new image, we also see dark galaxies, in addition to the much more diffuse and extended nebula,” Cantalupo said. “Some of this gas will fall into galaxies, but most of it will remain diffuse and never form stars.”

The researchers estimated the amount of gas in the nebula to be at least ten times more than expected from the results of computer simulations. “We think there may be more gas contained in small dense clumps within the cosmic web than is seen in our models. These observations are challenging our understanding of intergalactic gas and giving us a new laboratory to test and refine our models,” Cantalupo said.

In addition to Cantalupo and Prochaska, the coauthors of the paper include Piero Madau, professor of astronomy and astrophysics at UC Santa Cruz, and Fabrizio Arrigoni-Battaia and Joseph Hennawi at the Max Planck Institute for Astronomy in Heidelberg, Germany. This research was supported by grants from the National Science Foundation (AST-1010004, OIA-1124453) and NASA (NNX12AF87G).

The W. M. Keck Observatory operates the largest, most scientifically productive telescopes on Earth. The two, 10-meter optical/infrared telescopes on the summit of Mauna Kea on the Island of Hawaii feature a suite of advanced instruments including imagers, multi-object spectrographs, high-resolution spectrographs, integral-field spectroscopy and world-leading laser guide star adaptive optics systems. The Observatory is a private 501(c) 3 non-profit organization and a scientific partnership of the California Institute of Technology, the University of California and NASA.