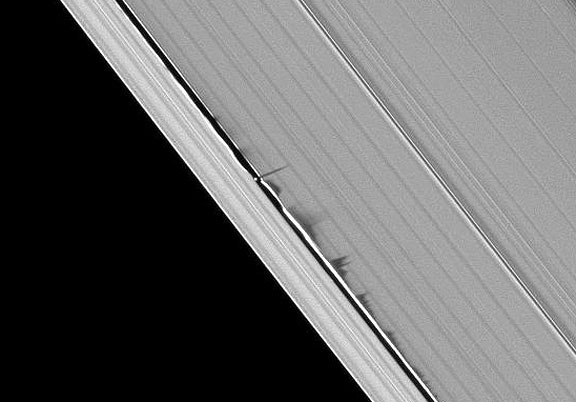 Jagged looking shadows stretch away from vertical structures of ring material created by the moon Daphnis in this image [Full-Res: PIA11547] taken as Saturn approaches its August 2009 equinox.

Jagged looking shadows stretch away from vertical structures of ring material created by the moon Daphnis in this image [Full-Res: PIA11547] taken as Saturn approaches its August 2009 equinox.

Daphnis (8 kilometers, or 5 miles across) is a bright dot casting a thin shadow just to the left of the center of the image. The moon has an inclined orbit, and its gravitational pull perturbs the orbits of the particles of the A ring forming the Keeler Gap’s edge and sculpting the edge into waves having both horizontal (radial) and out-of-plane components. See Wave Shadows in Motion to learn more and to see a movie of this process.

The novel illumination geometry that accompanies equinox lowers the sun’s angle to the ringplane and causes out-of-plane structures to cast long shadows across the rings. These scenes are possible only during the few months before and after Saturn’s equinox, which occurs only once in about 15 Earth years. To learn more about this special time and to see movies of moons’ shadows moving across the rings, see Moon Shadow in Motion and Weaving a Shadow.

This view looks toward the unilluminated side of the rings from about 43 degrees above the ringplane. The image was taken in visible light with the Cassini spacecraft narrow-angle camera on June 26, 2009. The view was acquired at a distance of approximately 823,000 kilometers (511,000 miles) from Daphnis and at a Sun-Daphnis-spacecraft, or phase, angle of 53 degrees. Image scale is 5 kilometers (3 miles) per pixel.