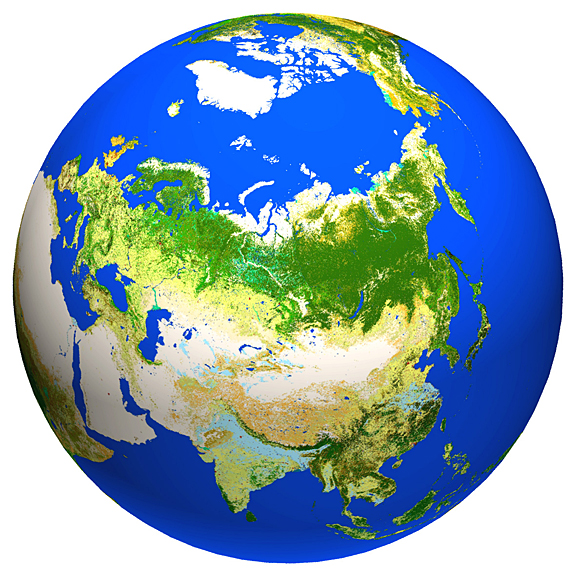 ESA’s Earth-observing satellites are helping to understand the intricate role that Eurasia’s boreal forest – the planet’s largest land ecosystem – plays in the chemical make-up of the atmosphere and the global climate system.

ESA’s Earth-observing satellites are helping to understand the intricate role that Eurasia’s boreal forest – the planet’s largest land ecosystem – plays in the chemical make-up of the atmosphere and the global climate system.

By fostering new use of Earth observation data through the Atmosphere-Land Interaction Study (ALANIS), insight is being gained into how boreal forests contribute to greenhouse gas and aerosol concentration, and into the processes governing the interplay between Earth’s surface and atmosphere.

Eurasian boreal forest covers a vast area stretching from Norway to the most easterly part of Russia, and from Siberia to northern Mongolia.

Responding to the need to quantify, model and understand the processes occurring in this huge remote region, ALANIS was set up within ESA’s Support to Science Element in partnership with the International Geosphere-Biosphere Programme’s International Land Ecosystem-Atmosphere Processes Study (iLEAPS).

Executive Director of the iLEAPS International Project Office, Anni Reissell, said, “This collaboration draws together Earth system and Earth observation communities and is vital for planning future remote-sensing products to increase our understanding of land-atmosphere interactions.”

To maximise the benefits to science, the project is divided into three main areas: methane, smoke plumes and aerosol production.

Boreal lakes, inundated areas, permafrost and wetlands harbour the largest natural source of methane – a gas 21 times more harmful than carbon dioxide when it comes to global warming. There are many uncertainties as to the variability of emissions from this region and how they contribute to climate change.

The project is therefore generating one of the most complete datasets over the region by exploiting the potential offered by sensors carried on Envisat. The dataset includes atmospheric methane concentrations derived from the Sciamachy sensor and different products describing the land, such as the variability and extent of wetlands, inundated areas and snowmelt.

Garry Hayman from the UK Centre for Ecology and Hydrology, said, “I am really excited by this project. It addresses a key issue in the global methane cycle and is developing new products to test and improve one of the leading land surface models.”

Another element of ALANIS investigates the impact of forest fires, such as those that occurred around Moscow this summer, on atmospheric chemistry. Smoke plumes can reach high into the atmosphere where gases and aerosols are more readily transported around the globe.

Data from the Advanced Along Track Scanning Radar (AATSR) and the optical MERIS instrument have provided information to generate a dataset that describes the extent of burnt areas and the carbon released to the atmosphere, as well as a new 3D representation of smoke plumes.

Jan-Peter Muller from University College London explains, “A better knowledge of plume injection height is important because pollutants reaching above the planetary boundary layer are transported thousands of kilometres.

“Since an accurate estimate of injection height for biomass burning emissions is important for modelling the transport of trace gases and aerosols, we are developing and validating a model based on Envisat AATSR and MERIS data.”

The project is also investigating ways of differentiating between atmospheric aerosols originating from human activities and those coming from natural sources.

The preliminary ALANIS results were presented at the EO for Land-Atmosphere Interactions Science Conference in November.