I first wrote this for StarTrek’s official website in 2002 the day after the “Enterprise” episode “Carbon Creek” first aired. The story was clearly inspired by my friend Homer Hickam’s book “Rocket Boys” Well, that episode was on TV last night.
Curiously, after 15 years, and several pivots, NASA seems to be moving back toward the Moon again (which happens to be my favorite destination for human exploration as well as Homer’s) and interstellar object 1I/’Oumuamua (previously A/2017 U1) is passing through our solar system – echoes of the plot of yet another Star Trek tale i.e. “Star Trek First Contact”.

Within – and below – my article are references to thinking that was on everyone’s mind as talk of going back to the Moon and on to Mars was on everyone’s mind. This was a few months before the loss of Columbia and more than a year before President Bush announced the “Vision for Space Exploration”.

I tuned in last night, as I do every week, to watch “Enterprise”. I knew the basic premise of the episode: Vulcans crash near a small town (“Carbon Creek”) in Pennsylvania in 1957. But knew little else. As the story unfolded, the stage was quickly set: the Vulcans were visiting Earth to observe our first artificial satellite, Sputnik 1. They crashed and found themselves in a small coal mining town.

Within moments I thought immediately of my friend (and SpaceRef advisor), “Rocket Boys” author Homer Hickam who wrote of his experiences in a coal mining town (“Coalwood”) watching Sputnik 1 soar overhead. I asked Homer what he thought of the episode. He said:

“I got quite a few chuckles from it. I have little doubt that the writers were inspired by my book “Rocket Boys” and its film adaptation “October Sky”. Just as with my story there was the boy in a mining town inspired by Sputnik, wanting to go to college and hoping to figure out a way.

In “Rocket Boys”, I wrote about Quentin, the prototypical nerd genius of the “Big Creek Missile Agency”, who not only read every book in the library but, because he noticed that beggar’s lice (a seed) stuck to his jeans, came up with the idea of Velcro (he also invented panty hose, by the way, at least conceptually and Tang, too). Unfortunately, we didn’t make any money off Quentin’s brainstorm because we Rocket Boys reacted to his beggar’s lice proposal as we did to most of his other ideas – “Shut up, Quentin!”

Anyway, imitation is the sincerest form of flattery, so I’m pleased by the show and, come to think of it, it may explain a lot. Maybe Quentin was a Vulcan!”

While Quentin independently came up with an idea for hook-and-loop fabric fasteners, the actual product was developed by George de Mestral. Alert viewers will recall that “Mestral” was the name of one of the Vulcan characters in this episode!

By coincidence Homer and all of his “Rocket Boy” pals will be back in Coalwood on October 5th for the “October Sky Festival”. I suspect a few of them may be wearing Vulcan ears this year. 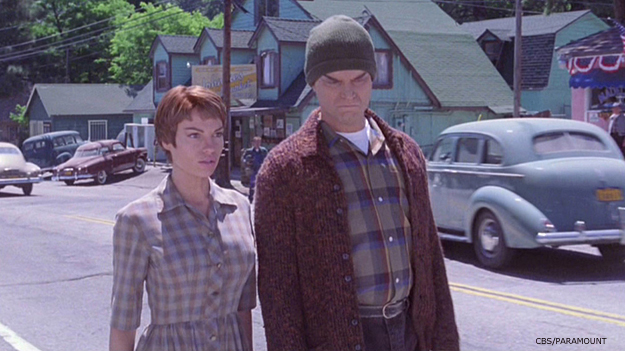 While often inspirational, how we did some things back in 1957 at the dawn of the space age (and still do them today) can also be a source of frustration.

By now many of you may have heard NASA Administrator Sean O’Keefe mention the fact that we’ve not made improvements in speed commensurate with some of our other technological advancements. We routinely move humans through space today at around 17,500 mph (28,000 kph). According to O’Keefe “that’s the same speed John Glenn traveled at during his first mission 40 years ago”.

Of course, that is the speed you need to travel so as to stay in low Earth orbit – whether you are Sputnik or a Vulcan starship.

There was a time when humans have traveled through space somewhat faster: up to 25,000 mph (40,000 kph) during Apollo trips to and from the Moon. While the technology certainly still exists to travel at these speeds – and even faster – we currently do not have a compelling reason to do so.

That may be changing.

After nearly a decade of being more or less absent, serious talk of exploration beyond low Earth orbit can be heard once again at NASA. A recent email memo by newly confirmed Deputy Administrator Fred Gregory is a clear demonstration that things are starting to happen. Gregory [with NASAese translation] said:

“Speaking Out: Seems as though, even after telling the crowd last Wednesday that it is OK to combine NEXT [the name of NASA’s new exploration planning activity] and Eileen’s science and the medical stuff as the beginning of several road maps with milestones that acknowledge the possibility of leaving Low Earth Orbit, there are still some who are afraid to take the next step without getting further permission. Those folks will be left at the station. Research driven exploration is where I am heading. If an email of this type will help, share this one with your folks and let’s get rolling. We need the convincing arguments that only your folks can help provide, to plan for follow on activities once we are cleared of our past sins and omissions. And we need those requirements right now! Fred”

This week a meeting of NASA scientists and engineers was held on Cape Cod. The attendees considered a variety of new (albeit preliminary) human exploration concepts – including one to send humans to the L1 point in the Earth-Moon system and another to put humans on the surface of Mars by 2018.

Curiously, just as a resurgence of interest in looking beyond low Earth orbit has been sparked at NASA, object J002E3 entered orbit around Earth.

Based on orbital calculations and analysis of light reflected off of the object it is most probable that J002E3 is the S-IVB upper stage that sent the Apollo 12 Command Module and Lunar Module to the Moon in 1969.

After bouncing around the Earth-Moon system for a few years, J002E3 managed to escape and enter its own solar orbit – one it pursued for three decades until being re-captured 6 months ago. Calculations now suggest that it will depart Earth orbit sometime in 2003 and return to an independent orbit around the sun.

Star Trek loves to present – and revisit – historical ironies – be it through time travel or encountering people and technology that had managed to survive in the depths of space for centuries. A Vulcan ship visiting Earth just as we make our very first step into the cosmic ocean is just the latest example.

During the Apollo 12 mission, by some ironic coincidence, Astronauts Pete Conrad and Alan Bean landed a short distance from the Surveyor III spacecraft – a trailblazer that had sat alone on the lunar surface for several years.

Perhaps we’ll soon be repeating such ironies once again in space.

Orbital dynamics may well cause J002E3 to make yet another return visit to near-Earth space in several decades. Perhaps, when it does, (unlike today) it will encounter ships bearing humans heading outwards – just like they do in the opening sequence of “Enterprise”.

“I saw your story on SpaceRef about the Star Trek Enterprise episode, “Carbon Creek.” I honestly have no idea if our writers were deliberately referencing Homer’s book, Rocket Boys, but the echoes struck me as well. For the scene in which our Vulcan friends sold the invention of Velcro, I took it upon myself to put a sign on the front window of the office building, proclaiming it to be the “Big Creek Manufacturing & Sales” company, which was my deliberate nod to Rocket Boys. I’ve attached a snapshot of the window. I also had the company name placed on the building directory. It’s been quite a few years since I’ve seen the episode, and I don’t recall if either is visible in the finished episode.”

Well if you know to look for them, they’re there. Rocket Boys in Carbon Creek. 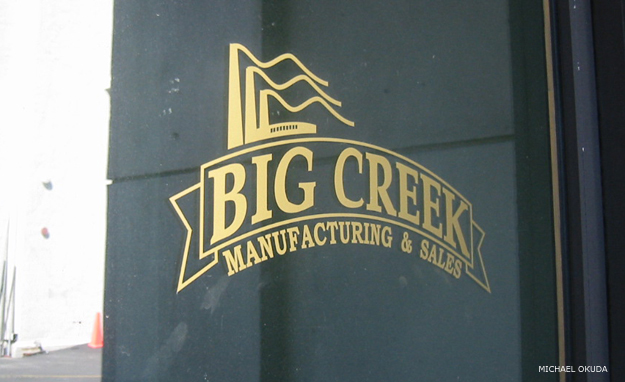 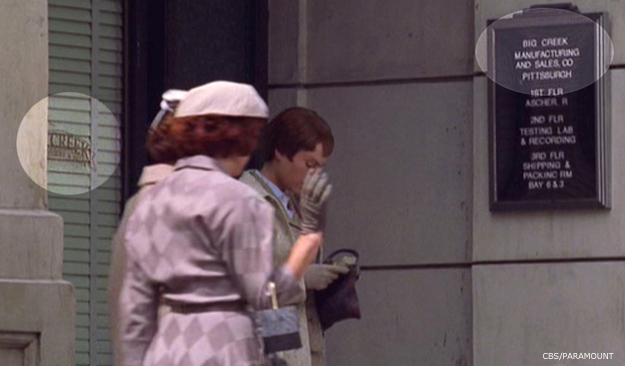