Satellites are designed to withstand a variety of challenges to ensure that the sensitive electronics on board can survive the effects of launch and perform for years in the harsh conditions of space.
One of the major hurdles engineering teams face when designing a satellite is how much fuel it can carry to operate throughout its lifetime. Many satellites are left to die and then become space debris after they run out of fuel. But what if we were able to refuel them?

The ability to refuel satellites in space could one day save satellite operators from the significant costs of building and launching new replacement satellites. With over 1000 active satellites currently operating in the near-Earth environment (many of them worth hundreds of millions of dollars), and an additional 180 decommissioned satellites still orbiting around our planet, the savings would be substantial.
Dextre

The Canadian Space Agency is collaborating with NASA on a new project called the Robotic Refueling Mission (RRM) to demonstrate how space robots could use specially designed tools and unique maneuvers to refuel satellites. RRM will be conducted on the International Space Station using Dextre, the Station’s Canadian-built robotic handyman. It will mark the first time that Dextre is used for a research and development project. The work being done on the Robotic Refueling Mission is in line with Canada’s own efforts to advance state-of-the-of-art space robotics with the Next-Generation Canadarm project, a research and development initiative that is developing new robotic architectures, components, tools and techniques today for the servicing missions of tomorrow.

Satellites are currently designed to never be accessed after launch; typically, the fuel tank is triple-sealed and then covered with protective blankets. Dextre will perform a series of maneuvers that will simulate accessing the fuel systems of a typical satellite. The RRM hardware, provided by NASA, includes four specialized tools for Dextre and a customized task box (roughly the size of a refrigerator) that will represent a satellite. With this unique RRM toolkit (including a Wire Cutter and Blanket Manipulation Tool, Multifunction Tool, Safety Cap Removal Tool and Nozzle Tool), Dextre will cut through the simulated satellite’s exterior, remove layers of insulation and cut away the wiring covering the fuel cap. In the next phase of the operation, the robotic handyman will connect a hose to the fuel valve and pump simulated liquid fuel into the mock spacecraft. The RRM tool kit and task box launched to the Space Station on board the Space Shuttle Atlantis on its final flight in July 2011. 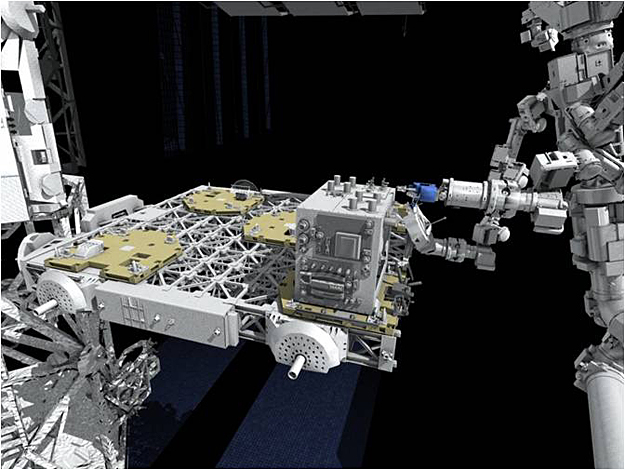 The RRM task box and tool kit was developed by NASA at the Goddard Space Flight Center. Dextre operations for the Robotic Refueling Mission will be remotely controlled by flight controllers at NASA’s Johnson Space Center in Houston, Texas, and the Canadian Space Agency’s Mission Operations Centre in Saint-Hubert, Quebec.