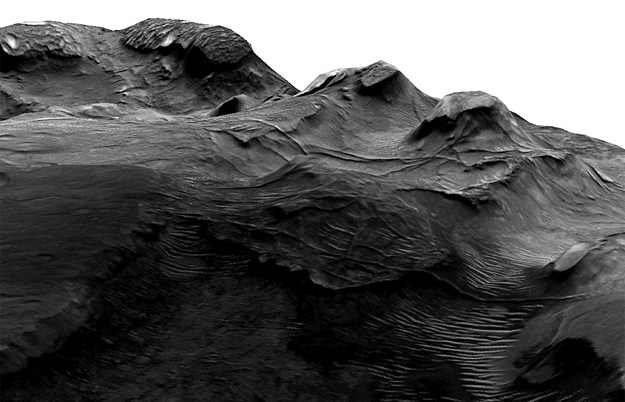 PROVIDENCE, R.I. [Brown University] — Networks of narrow ridges found in impact craters on Mars appear to be the fossilized remnants of underground cracks through which water once flowed, according to a new analysis by researchers from Brown University.

PROVIDENCE, R.I. [Brown University] — Networks of narrow ridges found in impact craters on Mars appear to be the fossilized remnants of underground cracks through which water once flowed, according to a new analysis by researchers from Brown University.

The study, in press in the journal Geophysical Research Letters, bolsters the idea that the subsurface environment on Mars once had an active hydrology and could be a good place to search for evidence of past life. The research was conducted by Lee Saper, a recent Brown graduate, with Jack Mustard, professor of geological sciences.

The ridges, many of them hundreds of meters in length and a few meters wide, had been noted in previous research, but how they had formed was not known. Saper and Mustard thought they might once have been faults and fractures that formed underground when impact events rattled the planet’s crust. Water, if present in the subsurface, would have circulated through the cracks, slowly filling them in with mineral deposits, which would have been harder than the surrounding rocks. As those surrounding rocks eroded away over millions of years, the seams of mineral-hardened material would remain in place, forming the ridges seen today.

To test their hypothesis, Saper and Mustard mapped over 4,000 ridges in two crater-pocked regions on Mars, Nili Fossae and Nilosyrtis. Using high-resolution images from NASA’s Mars Reconnaissance Orbiter, the researchers noted the orientations of the ridges and composition of the surrounding rocks.

The orientation data is consistent with the idea that the ridges started out as fractures formed by impact events. A competing hypothesis suggests that these structures may have been sheets of volcanic magma intruding into the surrounding rock, but that doesn’t appear to be the case. At Nili Fossae, the orientations are similar to the alignments of large faults related to a mega-scale impact. At Nilosyrtis, where the impact events were smaller in scale, the ridge orientations are associated with each of the small craters in which they were found. “This suggests that fracture formation resulted from the energy of localized impact events and are not associated with regional-scale volcanism,” Saper said.

Importantly, Saper and Mustard also found that the ridges exist exclusively in areas where the surrounding rock is rich in iron-magnesium clay, a mineral considered to be a telltale sign that water had once been present in the rocks.

“The association with these hydrated materials suggests there was a water source available,” Saper said. “That water would have flowed along the path of least resistance, which in this case would have been these fracture conduits.”

As that water flowed, dissolved minerals would have been slowly deposited in the conduits, in much the same way mineral deposits can build up and eventually clog drain pipes. That mineralized material would have been more resistant to erosion than the surrounding rock. And indeed, Saper and Mustard found that these ridges were only found in areas that were heavily eroded, consistent with the notion that these are ancient structures revealed as the weaker surrounding rocks were slowly peeled away by wind.

Taken together, the results suggest the ancient Martian subsurface had flowing water and may have been a habitable environment.

“This gives us a point of observation to say there was enough fracturing and fluid flow in the crust to sustain at least a regionally viable subsurface hydrology,” Saper said. “The overarching theme of NASA’s planetary exploration has been to follow the water. So if in fact these fractures that turned into these ridges were flowing with hydrothermal fluid, they could have been a viable biosphere.”

Saper hopes that the Curiosity rover, currently making its way across its Gale Crater landing site, might be able to shed more light on these types of structures.

“In the site at Gale Crater, there are thought to be mineralized fractures that the rover will go up and touch,” Saper said. “These are very small and may not be exactly the same kind of feature we studied, but we’ll have the opportunity to crush them up and do chemical analysis on them. That could either bolster our hypothesis or tell us we need to explore other possibilities.”

The research was supported by a grant from NASA’s Rhode Island Space Grant Consortium and through a NASA subcontract with the Applied Physics Lab at Johns Hopkins University. Editors: Brown University has a fiber link television studio available for domestic and international live and taped interviews, and maintains an ISDN line for radio interviews. For more information, call (401) 863-2476.