We now understand the nature of the giant storms on Saturn. Through the analysis of images sent from the Cassini space probe belonging to the NASA and ESA, as well as the computer models of the storms and the examination of the clouds therein, the Planetary Sciences Group of the University of the Basque Country has managed to explain the behaviour of these storms for the very first time.
The article explaining the discovery, the lead author being Enrique García Melendo, researcher at the Fundació Observatori Esteve Duran – Institut de Ciències de l’Espai, of Catalonia, was published in Nature Geosciences.

Approximately once every Saturnian year – equivalent to 30 Earth years – an enormous storm is produced on the ringed planet and which affects the aspect of its atmosphere on a global scale. These gigantic storms are known as Great White Spots, due to the appearance they have on the atmosphere of the planet. The first observation of one of these was made in 1876; the Great White Spot of 2010 was the sixth one to be observed. On this occasion the Cassini space vehicle was able to obtain very high resolution images of this great meteorological structure. The storm initiated as a small brilliant white cloud in the middle latitudes of the northern hemisphere of the planet, and grew rapidly and remained active for more than seven months. Over this time an amalgam of white clouds was generated which expanded to form a cloudy and turbulent ring with a surface area of thousands of millions of square kilometres. Two year age the Planetary Sciences Group presented a first study of the storm and which was published on the front cover of Nature on the 7th of July, 2011. Now, with this new research, the hidden secrets of the phenomenon have been revealed, studying in detail the “head” and the “focus” of the Great White Spot. 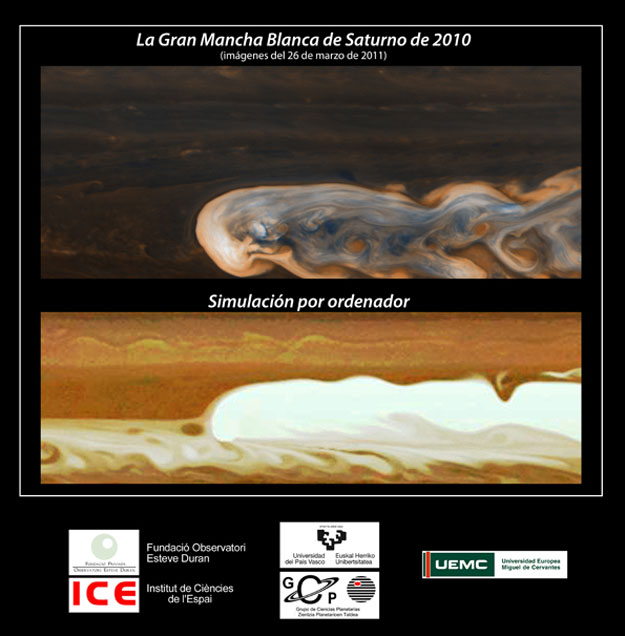 In the upper part, a detailed image in false color of the storm on Saturn is shown. The lower part is a computer simulation of the storm. The white clouds superimposed on the real background of the planet’s clouds represent the result of the evolution in the storm’s aspect on its interaction with Saturn’s winds. Credit: UPV/EHU.

The team of astronomers analysed the images taken from the Cassini probe in order to measure the winds in the “head” of the storm, the focus where the activity originated. In this region the storm interacts with the circulating atmosphere, forming very intense sustained winds, typically of 500 kilometres an hour. “We did not expect to find such violent circulation in the region of the development of the storm, which is a symptom of the particularly violent interaction between the storm and the planet’s atmosphere”, commented Enrique García. They were also able to determine that these storm clouds are at 40 km above the planet’s own clouds.

Map of the winds at the head of the storm, where the arrows represent the typical intensity of the wind at up to 500 km/h, is reaching maximum values of 600 km/h in certain zones.Credit: UPV/EHU.

The research revealed the mechanism that produces this phenomenology. The team of scientists designed mathematical models capable of reproducing the storm on a computer, providing a physical explanation for the behaviour of this giant storm and for its lengthy duration. The calculations show that the focus of the storm is deeply embedded, some 300 km above the visible clouds. The storm transports enormous quantities of moist gas in water vapour to the highest levels of the planet, forming visible clouds and liberating enormous quantities of energy. This injection of energy interacts violently with the dominant wind of Saturn to produce wind storms of 500 km/h. The research also showed that, despite the enormous activity of the storm, this was not able to substantially modify the prevailing winds which blow permanently in the same direction as the Earth’s parallels, but they did interact violently with them. An important part of the computer’s calculations were made thanks to the Centre de Serveis Científics i Acadèmics de Catalunya (CESCA), and the computer services at the Institut de Ciències de l’Espai (ICE), also based in the Catalan capital of Barcelona.

Apart from the curiosity of knowing the physical processes underlying the formation of these giant storms on Saturn, the study of these phenomena enable us to enhance our knowledge of the models employed in research into meteorology and the behaviour of the Earth’s atmosphere, in a very different environment and impossible to simulate in a laboratory. “The storms on Saturn are, in a way, a test bank of the physical mechanisms underlying the generation of similar meteorological phenomena on Earth”, commented Agustín Sánchez Lavega, Director of the Planetary Sciences Group at the UPV/EHU.