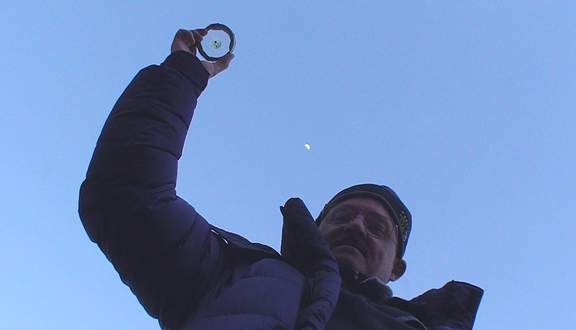 Image: Keith Cowing standing at Everest Base Camp in Nepal holding a container with 4 small moon rocks collected during the Apollo 11 mission. The Moon can be seen overhead. These moon rocks were carried to the summit of Mt. Everest by astronaut Scott Parazynski in May 2009. These moon rocks, plus a piece of the summit of Mt. Everest are now on board the International Space Station. See “Photos From Moon and Everest Rock Event at NASA” and “Moon and Everest Rocks At Home in Space”

Keith Cowing: I have been home from my trip to Mt. Everest in Nepal for a month. That trip lasted for a month and a half. I was gone longer than I have been back. While I have readjusted to my life here, part of me is very much still there. And to be honest, I like that situation. That said, I am still trying to process all that happened at Everest.

I am very satisfied with the fact that I made it there and back and was able to complete my tasks – my mission, so to speak. Scott made it to the summit – his mission – the first person to travel into space and stand atop the highest point on this planet. In so doing, he carried pieces of the moon collected during the Apollo 11 mission – rocks that I carried with me 24 hours a day for a month before they made their way to the summit. Improbable yet historically resonant stuff.

Some background. I went to Everest to provide media support – education and public outreach – for my friend, astronaut and mountaineer, Scott Parazynski as he made his second attempt to reach the summit of Everest. Scott tried last year but had to turn back tantalizingly close due to a back injury. I was supposed to have gone and reported on his climb from Everest Base Camp but politics surrounding the 2008 Olympics and China’s bullying of Nepal made my presence problematical if not outright dangerous.

2009 was a second chance for both Scott and I. This year I went, once again, to help transmit news of his adventures (and mine) to the outside world with a focus on the relevance of such activities to the exploration of space and other worlds. We were supposed to have a third team member: Miles O’Brien, formerly CNN’s space correspondent. Unfortunately, Miles, now a freelance journalist, had a previous commitment that precluded his travel to Nepal. None the less, he provided critical support via satellite from his home in New York. Miles was our Mission Control.

We also went to Everest representing the Challenger Center for Space Science Education. Miles and I were already on the Board of Directors. Scott was elected to be board while we were in Nepal. Indeed, I actually tendered my vote for Scott from an Internet Cafe in Dengboche, Nepal – complete with a dirt floor and fresh yak poop outside the door.

I have been to some amazing places in my life. Probably the most exotic (until now) had been Devon Island, home to the Haughton Mars Project . Located less than a thousand miles from the north pole in a polar desert adjacent to a huge meteor impact crater, this place is often called “Mars on Earth”. I have spent two, one-month stays there, plus a third visit for a week. The sheer isolation and alien aspect of this place left an indelible impression on me. But that was only part of the experience. Returning home to my wife and life in metropolitan Washington DC was equally exotic.

When I left for Nepal – and Everest – I felt that I was armed (I had hoped) with skills that would serve me well in this cold, remote, and hazardous environment. Well, serve me they did, but this trip vastly exceeded my experiences on Devon Island.

I watched a friend prepare and then depart for a trip to the summit of Mt. Everest. I witnessed two incredible avalanches, one of which killed someone. I suffered severe dehydration and food poisoning which put me, at one point, in a rather hazardous situation. I hiked up 14,000 feet across difficult terrain. I then lived in a cold tent atop an active glacier with half the oxygen I had spent 53 years breathing, losing 21 pounds in 6 weeks. I watched a steady stream of people try – and turn back from – their attempt at the summit while others were evacuated with severe medical issues.

I facilitated telephone conversations with astronauts aboard the International Space Station and communicated via satellite with the real world on a daily basis. I lived amidst a place with powerful historic resonances. And I encountered a people – Sherpas – with an other-worldly and serene approach to life, teaching one of them to look up at the night sky to track satellites while I watched others treat the moon rock I carried as a sacred object.

Indeed, this trip truly meets anyone’s definition of “adventure of a lifetime”. Add in Scott’s summit, the moon rock, and the sheer austere majesty of this extraordinary place, and I find myself at a continual loss for words – and a context within which to frame the experience.