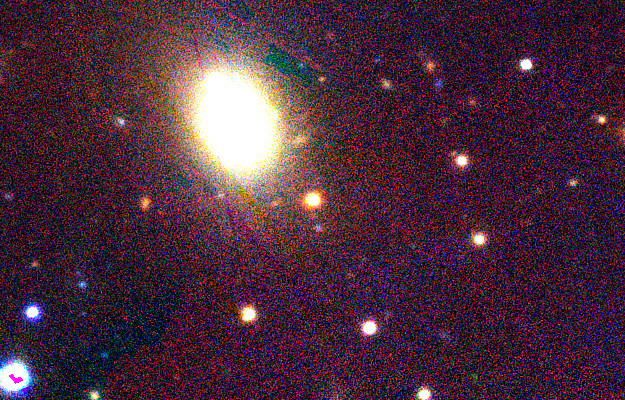 The star Eta Carinae is ready to blow. 170 years ago, this 100-solar-mass object belched out several suns’ worth of gas in an eruption that made it the second-brightest star after Sirius. That was just a precursor to the main event, since it will eventually go supernova.

The star Eta Carinae is ready to blow. 170 years ago, this 100-solar-mass object belched out several suns’ worth of gas in an eruption that made it the second-brightest star after Sirius. That was just a precursor to the main event, since it will eventually go supernova.

Supernova explosions of massive stars are common in spiral galaxies like the Milky Way, where new stars are forming all the time. They are almost never seen in elliptical galaxies where star formation has nearly ceased. As a result, astronomers were surprised to find a young-looking supernova in an old galaxy. Supernova PS1-12sk, discovered with the Pan-STARRS telescope on Haleakala, is rare in more ways than one.

“This supernova is one-of-a-kind,” said Nathan Sanders of the Harvard-Smithsonian Center for Astrophysics (CfA), lead author of the discovery paper. “And it’s definitely in the wrong neighborhood.”

Based on the presence of helium and other features, PS1-12sk is classified as a very rare Type Ibn supernova — only the sixth such example found out of thousands of supernovae. Although the origin of this supernova type is unclear, the most likely cause seems to be the explosion of a massive star that previously ejected massive amounts of helium gas, much like Eta Carinae’s Homunculus Nebula.

That origin was supported by the fact that the five previous Type Ibn supernovae were all found in galaxies like the Milky Way that are actively forming stars. (Since massive stars don’t live long, they don’t stray far from where they are born before exploding.)

PS1-12sk is different. It was found on the outskirts of a bright elliptical galaxy located about 780 million light-years from Earth. The site of the explosion shows no signs of recent star formation, and a supernova from a massive star has never before been seen in a galaxy of this type.

“It could be that we simply got very lucky with this discovery. But luck favors the prepared,” said second author Alicia Soderberg of the CfA.

The finding suggests that the host galaxy might be hiding a star factory, allowing it to form massive stars where none were expected. Alternatively, PS1-12sk might have an entirely different origin such as a collision of two white dwarfs, one of which was helium-rich.

“Is this a runaway star from another star formation site? Is it a very local bit of star formation? Is it a different way for such a supernova to occur? None of these seems very likely so we have a real puzzle,” said co-author John Tonry (University of Hawaii Institute for Astronomy).

The research has been submitted for publication in The Astrophysical Journal.