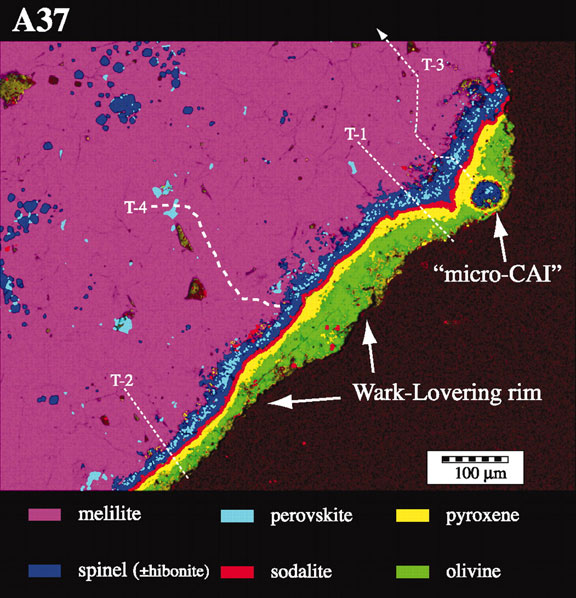 NASA research on a meteorite has provided new evidence that the inner planets formed from materials spread far and wide in the early solar system, and not just from nearby matter. Oxygen isotopic measurements in the core and outer rim of a calcium-aluminum-rich inclusion contained in the Allende meteorite record the entire range of oxygen isotopic composition previously measured in all solids in the solar system.

NASA research on a meteorite has provided new evidence that the inner planets formed from materials spread far and wide in the early solar system, and not just from nearby matter. Oxygen isotopic measurements in the core and outer rim of a calcium-aluminum-rich inclusion contained in the Allende meteorite record the entire range of oxygen isotopic composition previously measured in all solids in the solar system.

The research provides the first measurements to show that early forming solids experienced vastly varying environments during the planet-forming period of our solar system. The study substantiates ideas that the terrestrial planets?Earth, Mars, Mercury and Venus?formed as a result of materials accreting from various sources across the protoplanetary disk rather than from just a nearby region. The findings will be published online March 4 in the journal Science.

?To find, in one grain of nebular dust, values that systematically span nearly the entire oxygen isotopic range is remarkable. It requires that we take a critical look at our current models for protoplanetary disk evolution,? said Justin Simon, NASA planetary scientist in the Astromaterials Research and Exploration Science Directorate at NASA?s Johnson Space Center in Houston and lead author of the paper.

Using the NanoSIMS (nanometer-scale secondary-ion mass spectrometer) at Lawrence Livermore National Laboratory in Livermore, Calif., Simon and scientists from LLNL, University of California, Berkeley, and the University of Chicago measured the concentrations of oxygen isotopes found in a calcium-aluminum-rich inclusion (CAI) contained in a piece of the Allende meteorite.

Allende is the largest carbonaceous chondrite meteorite ever found on Earth. It fell to the ground in 1969 on the Mexican state of Chihuahua. One of the most studied of all meteorites, it is notable for possessing abundant CAIs.

Carbonaceous chondrite meteorites can be thought of as leftover building materials that did not go into making the planets. Because they are made up of materials like CAIs that come from the planet-forming period of our solar system, they contain a record of the early solar system, including information about how the planets formed.

The paper presents evidence that CAIs formed from several oxygen reservoirs, likely in distinct regions of the solar nebula. Through oxygen isotopic analysis, the team found that the CAI moved farther from the sun, where the CAI exchanged oxygen with at least one separate gaseous reservoir that was similar in composition to that of the building materials of the terrestrial planets. Evidence in the rim indicates that the CAI passed through various regions of the protoplanetary disk, and likely returned back to its place of origin near the sun.

Scientists once adhered to a ?feeding zone? theory of planet formation, believing that a planet developed by accreting material by and large only at the same distance from the sun as its orbit. In the early 2000s this model changed as theoretical modelers proposed that instead of all the material coming from the same ?feeding zone,? large amounts of materials came from regions both closer to and farther from the sun.

?This is the first actual, measurable evidence in a sample that this new idea of material going in and out is the real story,? said Simon. ?Results from our sample analysis confirm, for the first time, the radial transfer model of planetary formation. Our work challenges the notion of the ?feeding zone.??

For more on NASA and agency programs, visit: http://www.nasa.gov