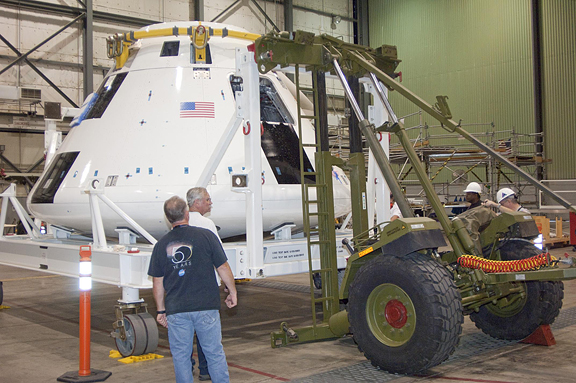 The Orion crew module that will be used for the first launch abort system Pad Abort 1 flight test is scheduled to depart NASA’s Dryden Flight Research Center Aug. 19 for the White Sands Missile Range, N.M., where the launch abort tests will be performed.

The Orion crew module that will be used for the first launch abort system Pad Abort 1 flight test is scheduled to depart NASA’s Dryden Flight Research Center Aug. 19 for the White Sands Missile Range, N.M., where the launch abort tests will be performed.

Similar to the Apollo crew module, the Orion capsule also has a launch abort system to make it possible for the crew to escape from the launch rocket should something go wrong on the pad or during the ascent to orbit.

Numerous tests were conducted on the Orion test capsule while at Dryden. Large-scale test rigs were fabricated to closely measure the weight and center of gravity of the crew module. Vibration and acoustics tests were then completed to assess the effects of an abort motor firing on both the structure and internal electronics of the crew module. Finally, a combined systems test was conducted to verify the flight readiness of the flight control, antenna, pyrotechnic, and ground control systems. That test was also used as a dress rehearsal for mission operations.

Over 600 sensors were installed on the crew module and launch abort systems. These sensors measure pressures, temperatures, accelerations, acoustics, and structural strain. A high-speed video camera was also installed to capture the inflation and dynamics of the three 116-foot recovery parachutes.

The first of five planned abort tests, Pad Abort 1, is scheduled for early 2010 from the new launch pad at White Sands. Two of the tests will evaluate the performance of the launch abort system from ground level, simulating an abort while astronauts are on the pad waiting for launch. Three more tests will evaluate the launch abort system performance at different altitudes and speeds using an excess Peacekeeper rocket, provided by the U.S. Air Force, to carry the crew module to the proper test conditions.

For the pad abort test, the launch abort system’s abort motor will be ignited, lifting the Orion crew module test article to an altitude of about one mile, where the launch abort system will jettison itself approximately 22 seconds after the launch. Parachutes will deploy to land the vehicle on the desert floor. NASA has developed additional methods to abort a launch using the Orion service module and the crew module during the high altitude portion of the climb to orbit.

PHOTO EDITORS: High-resolution photos to support this release are available on-line at: http://www.nasa.gov/centers/dryden/news/newsphotos/index.html