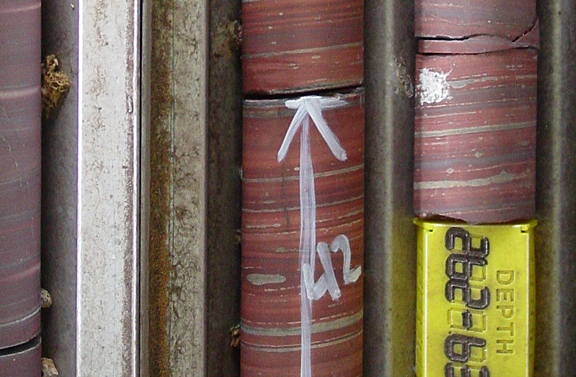 An example of a drill core of the chemical sediments called iron formations that the UCR-based team used to track marine phosphorus concentrations. The core is from the approximately 2.2 billion-year-old Hotazel Formation from South Africa. Photo credit: Lyons lab, UC Riverside.

A team of scientists, led by biogeochemists at the University of California, Riverside, has found new evidence linking “Snowball Earth” glacial events to the rise of early animals.

An example of a drill core of the chemical sediments called iron formations that the UCR-based team used to track marine phosphorus concentrations. The core is from the approximately 2.2 billion-year-old Hotazel Formation from South Africa. Photo credit: Lyons lab, UC Riverside.

A team of scientists, led by biogeochemists at the University of California, Riverside, has found new evidence linking “Snowball Earth” glacial events to the rise of early animals.

The controversial Snowball Earth hypothesis posits that the Earth was covered from pole to pole by a thick sheet of ice lasting, on several occasions, for millions of years. These glaciations, the most severe in Earth history, occurred from 750 to 580 million years ago. The researchers argue that the oceans in the aftermath of these events were rich in phosphorus, a nutrient that controls the abundance of life in the oceans.

The UC Riverside team and colleagues tracked phosphorus concentrations through Earth’s history by analyzing the composition of iron-rich chemical precipitates that accumulated on the seafloor and scavenged phosphorus from seawater. Their analyses revealed that there was a pronounced spike in marine phosphorus levels in the mid-Neoproterozoic (from ~750 to ~635 million years ago).

To explain these anomalously high concentrations, the researchers argue that the increase in erosion and chemical weathering on land that accompanied Snowball Earth glacial events led to the high amounts phosphorus in the ocean. The abundance of this nutrient, which is essential for life, in turn, led to a spike in oxygen production via photosynthesis and its accumulation in the atmosphere, facilitating the emergence of complex life on Earth.

Study results appear in the Oct. 28 issue of Nature.

“In the geological record, we found a signature for high marine phosphorus concentrations appearing in the immediate aftermath of the Snowball Earth glacial events,” said Noah Planavsky, the first author of the research paper and a graduate student in the Department of Earth Sciences. “Phosphorus ultimately limits net primary productivity on geological timescales. Therefore, high marine phosphorus levels would have facilitated a shift to a more oxygen-rich ocean-atmosphere system. This shift could have paved the way for the rise of animals and their ecological diversification. Our work provides a mechanistic link between extensive Neoproterozoic glaciations and early animal evolution.”

Planavsky explained the link between marine phosphorus concentrations and the levels of oxygen in the atmosphere.

“High phosphorus levels would have increased biological productivity in the ocean and the associated production of oxygen by photosynthesis,” he said. “Much of this organic matter is consumed, in turn, as a result of respiration reactions that also consume oxygen. However, the burial of some proportion of the organic matter results in a net increase of oxygen levels in the atmosphere.”

Until now, scientists believed that geochemical conditions in the iron-rich ocean would have led to low phosphorus concentrations. The UC Riverside researchers found no evidence of a phosphorus crisis after Snowball Earth glacial events, however, finding instead indications of an abundance of phosphorus.

“There are several known chemical fingerprints for increasing oxygen in the ocean and, by inference, in the atmosphere during the middle part of Neoproterozoic, and the rise of animals is an expected consequence,” said Timothy Lyons, a professor of biogeochemistry and the senior investigator in the study. “But our results may be the first to capture the nutrient driver that was behind this major step in the history of life, and that driver was ultimately tied to the extreme climate of the period.”

The researchers present data from approximately 700 individual samples of iron-oxide-rich rocks that included new results as well as those obtained from a comprehensive survey of the literature.