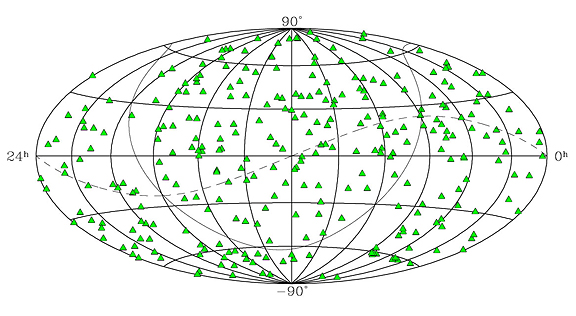 Image: sky map of the 295 defining sources of ICRF2. The dashed line represents the ecliptic and the solid line is the galactic plane. Credit: Dave Boboltz / USNO

NASA: Many of us have been rescued from unfamiliar territory by directions from a Global Positioning System (GPS) navigator. GPS satellites send signals to a receiver in your GPS navigator, which calculates your position based on the location of the satellites and your distance from them. The distance is determined by how long it took the signals from various satellites to reach your receiver.

Image: sky map of the 295 defining sources of ICRF2. The dashed line represents the ecliptic and the solid line is the galactic plane. Credit: Dave Boboltz / USNO

NASA: Many of us have been rescued from unfamiliar territory by directions from a Global Positioning System (GPS) navigator. GPS satellites send signals to a receiver in your GPS navigator, which calculates your position based on the location of the satellites and your distance from them. The distance is determined by how long it took the signals from various satellites to reach your receiver.

The system works well, and millions rely on it every day, but what tells the GPS satellites where they are in the first place?

“For GPS to work, the orbital position, or ephemeris, of the satellites has to be known very precisely,” said Dr. Chopo Ma of NASA’s Goddard Space Flight Center in Greenbelt, Md. “In order to know where the satellites are, you have to know the orientation of the Earth very precisely.”

This is not as obvious as simply looking at the Earth – space is not conveniently marked with lines to determine our planet’s position. Even worse, “everything is always moving,” says Ma. Earth wobbles as it rotates due to the gravitational pull (tides) from the moon and the sun. Even apparently minor things like shifts in air and ocean currents and motions in Earth’s molten core all influence our planet’s orientation.

Just as you can use landmarks to find your place in a strange city, astronomers use landmarks in space to position the Earth. Stars seem the obvious candidate, and they were used throughout history to navigate on Earth. “However, for the extremely precise measurements needed for things like GPS, stars won’t work, because they are moving too,” says Ma.

What is needed are objects so remote that their motion is not detectable. Only a couple classes of objects fit the bill, because they also need to be bright enough to be seen over incredible distances. Things like quasars, which are typically brighter than a billion suns, can be used. Many scientists believe these objects are powered by giant black holes feeding on nearby gas. Gas trapped in the black hole’s powerful gravity is compressed and heated to millions of degrees, giving off intense light and/or radio energy.

Most quasars lurk in the outer reaches of the cosmos, over a billion light years away, and are therefore distant enough to appear stationary to us. For comparison, a light year, the distance light travels in a year, is almost six trillion miles. Our entire galaxy, consisting of hundreds of billions of stars, is about 100,000 light years across.

A collection of remote quasars, whose positions in the sky are precisely known, forms a map of celestial landmarks in which to orient the Earth. The first such map, called the International Celestial Reference Frame (ICRF), was completed in 1995. It was made over four years using painstaking analysis of observations on the positions of about 600 objects.

Ma led a three-year effort to update and improve the precision of the ICRF map by scientists affiliated with the International Very Long Baseline Interferometry Service for Geodesy and Astrometry (IVS) and the International Astronomical Union (IAU). Called ICRF2, it uses observations of approximately 3,000 quasars. It was officially recognized as the fundamental reference system for astronomy by the IAU in August, 2009.

Making such a map is not easy. Despite the brilliance of quasars, their extreme distance makes them too faint to be located accurately with a conventional telescope that uses optical light (the light that we can see). Instead, a special network of radio telescopes is used, called a Very Long Baseline Interferometer (VLBI).

The larger the telescope, the better its ability to see fine detail, called spatial resolution. A VLBI network coordinates its observations to get the resolving power of a telescope as large as the network. VLBI networks have spanned continents and even entire hemispheres of the globe, giving the resolving power of a telescope thousands of miles in diameter. For ICRF2, the analysis of the VLBI observations reduced uncertainties in position to angles as small as 40 microarcseconds, about the thickness of a 0.7 millimeter mechanical pencil lead in Los Angeles when viewed from Washington. This minimum uncertainty is about five times better than the ICRF, according to Ma.

Additionally, the exquisite precision of VLBI networks makes them sensitive to many kinds of disturbances, called noise. Differences in atmospheric pressure and humidity caused by weather systems, flexing of the Earth’s crust due to tides, and shifting of antenna locations from plate tectonics and earthquakes all affect VLBI measurements. “A significant challenge was modeling all these disturbances in computers to take them into account and reduce the noise, or uncertainty, in our position observations,” said Ma.

Another major source of noise is related to changes in the structure of the quasars themselves, which can be seen because of the extraordinary resolution of the VLBI networks, according to Ma.

The ICRF maps are not only useful for navigation on Earth; they also help us find our way in space — the ICRF grid and some of the objects themselves are used to assist spacecraft navigation for interplanetary missions, according to Ma.

Despite its usefulness for things like GPS, the primary application for the ICRF maps is astronomy. Researchers use the ICRF maps as driving directions for telescopes. Objects are referenced with coordinates derived from the ICRF so that astronomers know where to find them in the sky.

Astronomers use special detectors to make images of objects producing radiation our eyes can’t see. Even so, since things in space can have extremely different temperatures, objects that generate radiation in one frequency band, say optical, do not necessarily produce radiation in another, perhaps radio. The main scientific use of the ICRF maps is a precise grid for combining observations of objects taken using different frequencies and accurately locating them relative to each other in the sky.

Astronomers also use the frame as a backdrop to record the motion of celestial objects closer to us. Tracing how stars and other objects move provides clues to their origin and evolution.

The next update to the ICRF may be done in space. The European Space Agency plans to launch a satellite called Gaia in 2012 that will observe about a half-million quasars. Gaia uses an optical telescope, but because it is above the atmosphere, the satellite will be able to clearly see these faint objects and precisely locate them in the sky. The mission will use quasars that are optically bright, many of which are too dim in radio to be useful for the VLBI networks. The project expects to have enough observations by 2018 to 2020 to produce the next-generation ICRF.

ICRF2 involved researchers from Australia, Austria, China, France, Germany, Italy, Russia, Ukraine, and the United States; and was funded by organizations from these countries, including NASA. The analysis efforts are coordinated by the IVS. The IAU officially adopts the ICRF maps and recommends their occasional updates.