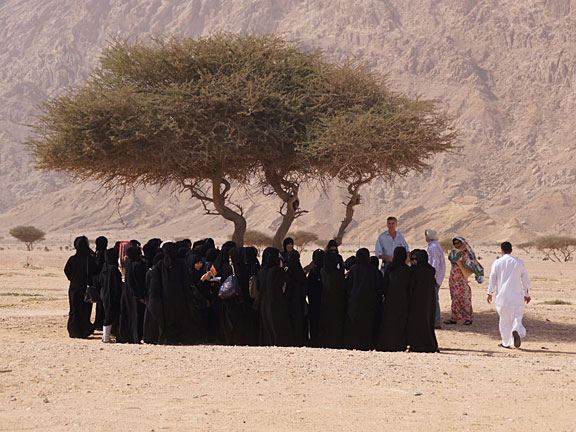 Whether or not you remember the winter of 2011 as unusually cold or snowy, an adventurous team of experts will remember its intense heat, as they searched for microbial life between sand dunes in the United Arab Emirates (UAE). They were searching for simple life forms that also may exist on other planets.

The United States team consisted of teachers Mike Wing and Lucinda Land, NASA space scientists Chris McKay and Jon Rask, and education specialist Matthew Reyes. Together, they embarked on a high adventure desert expedition from Feb. 18 – Mar. 4 with UAE students and teachers as part of a NASA education program, called Spaceward Bound. Developed at NASA’s Ames Research Center, Moffett Field, Calif., Spaceward Bound’s mission is to train the next generation of space explorers. Led by the U.S. team, local students and teachers from the Emirates were given real planetary research experience using remote, extreme environments in the UAE deserts as analogs for Mars and Saturn’s moon, Titan.

In prior investigations, including the Chilean Atacama desert in South America, McKay and his Spaceward Bound team brought students and teachers together to study the arid environment. The Atacama coastal desert has the least amount of rainfall in the world, yet receives water from marine fogs that reach inland off the cold Pacific Ocean. In some areas of the Atacama, high coastal mountains block the fog within a few kilometers from the coast. The Spaceward Bound team found that the colonization of bacteria on stones wetted by these fogs essentially dropped to zero in the arid core of the desert.

When the NASA Spaceward Bound team investigated the Namib Desert in southern Africa, they also found microbial life under stones near the coast, where moisture was provided by fog. However, unlike the mountainous Atacama, microbial life was found farther inland between sand dunes, where a small amount of rainfall occurs. To everyone’s surprise, however, there was no colonization gradient between these two zones.

For the UAE desert expedition, the science goals were similar. The Spaceward Bound team went to study microbial life and moisture content as the surface transitioned from coastal tidal flats to the north, gravel plains near the eastern mountains along the Oman border, and salt marshes, called “sabkha” (the Arabic word for a salt flat), nestled between sand dunes across the southern “Empty Quarter.” In addition, the researchers were looking for nitrates and perchlorate salts in the sabhka and desert ground water, placing data loggers to monitor rain, fog and cyanobacteria growth.

“When I was planning for the UAE desert expedition, I thought the science would be similar to the Atacama and the Namib. This proved to be quite mistaken,” said McKay. “The desert here provides new, and to my knowledge unique, opportunities that we only now understand with the help of our UAE colleagues.”

The Spaceward Bound team flew to Dubai where they were greeted by members of the Arab Youth Venture Foundation and UAE University scientists, Asma Al Farraj Al Kitbi and Meshgan M. Al-Awar. The following day, they traveled to the nearby desert to investigate the role of fog in supporting microbial ecosystems in deserts. The team searched for hypoliths — translucent quartz stones found in arid deserts with colonies of one-celled photosynthetic organisms that grow on the protected underside. The stones capture fog condensation and, when translucent to sunlight, provide a habitat for microbes to attach and grow. 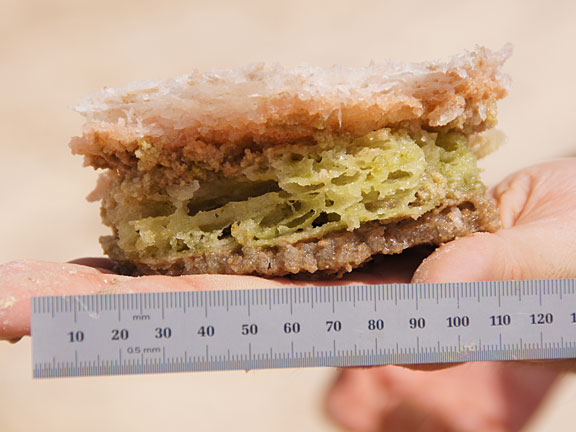 Salt tolerant & salt loving organisms– halophililc, bacteria and archaea, enjoy life in the desert by forming colonies in salt crusts. These deposits form a physical barrier that keeps the extremely salty solution below them from evaporating so quickly in the extremes of Arabian desert heat. Image credit: NASA/Matthew F. Reyes 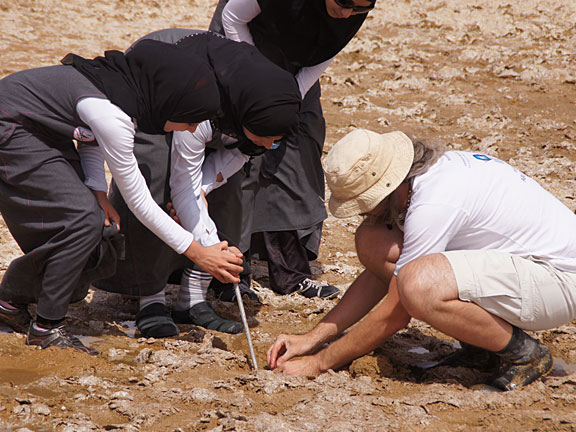 NASA Ames Space Scientist Jon Rask demonstrates how to capture methane bubbles that form underneath the Arabian salt marshes. Methane and other gasses that form in the high salt environment of the sabkha serve as useful biomarkers for extremophiles that may live on Mars. Image credit: NASA/Matthew F. Reyes

The team then went south to the Liwa Oasis to scout the sabkha salt flats which lay beneath and between shifting sand dunes. On the road to the Tel Moreeb dune, a sabkha was explored that contained microbial communities growing within and below the salt crusts. This site proved ideal to bring over 30 students and teachers from Cambridge High School in Abu Dhabi to introduce them to the fascinating science that exists in the UAE deserts. Students were from Germany, New Zealand, Pakistan, and the Emirates.

As the expedition continued, the Spaceward Bound team traveled along the Arabian (Persian) Gulf coast, where they stopped to sample methane gas and sediment at the edge of the sea. After collecting very little methane, they then backtracked to collect samples from a puddle on an inland salt flat.

The puddles, as well as the surrounding salt crust layers, were colored pink and orange with halophilic bacteria. The salt crust functioned as a greenhouse window, allowing filtered light to penetrate it. The salt also protects against evaporation, and limits competition from other organisms.

By the end of the week, the team continued south into the Rub Al Khali, also known as the “Empty Quarter.” As the world’s largest area of continuous sand dunes, it stretches about 600 miles into Saudi Arabia and is known for its intense heat. It was at least 30 degrees hotter on the dunes than it had been on the sabkha.

The UAE is famous for its “sabkha” salt flats. Most previous studies have focused on the coastal sabkhas that form along the Arabian Gulf. However, there are also sabkhas deep inland that are relics of ancient lakes long since dried up and are now covered by the world’s largest expanse of mega sand dunes. Small amounts of water seep up through the remnants of the lakebed and are found in patches between dunes.

“We are studying the organisms that live in this salt, how they survive the extreme conditions, and how evidence for their presence is preserved when the salt layers dry and fossilize,” said McKay. “This has direct relevance to the search for life on Mars, both in terms of active life and fossilized remains.”

In addition, there were some unexpected findings. One of the mysteries of Titan is the evidence that the soil (approx. 1 cm. deep) at the landing site of the Huygens Probe was moist under a very thin dry layer. This moisture was all the more puzzling because there was no evidence of ponds, streams or lakes near the landing site, and the equatorial and mid-latitudes on Titan (to 50 degrees in both hemispheres) are vast, dry deserts. What was causing this moisture?

“There appears to be a similar process occurring in the desert here,” explained McKay. Remote sensing data has indicated there are locations in the sand dunes where water is wicking up to the surface and evaporating without forming streams or ponds. Furthermore, this water originated as rain many hundreds of kilometers away. “This may be a good model for Titan,” McKay surmised.

Spaceward Bound UAE provided valuable information about microbial life in extremely dry environments. However, as is typical with field science, the expedition spawned many more questions than answers. UAE and NASA scientists collected many valuable data that will provide the basis for further discussion and research activities.

Teachers and students from the US and UAE had the opportunity to work alongside scientists from both countries to further their science understanding. They become Spaceward Bound alumni whose mission is to utilize the context of field research in remote and extreme environments to captivate students and inspire them to follow in the footsteps of researchers who investigate the great mysteries of microbial life on Earth, and potentially on other planets.