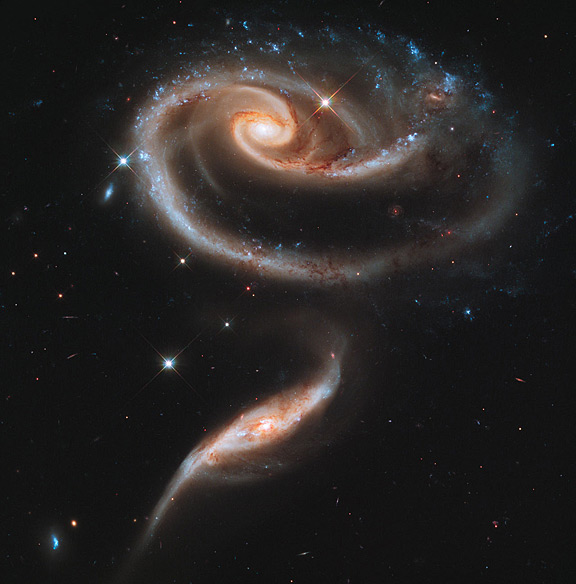 To celebrate the 21st anniversary of the Hubble Space Telescope’s deployment into space, astronomers at the Space Telescope Science Institute in Baltimore pointed Hubble’s eye at an especially photogenic pair of interacting galaxies called Arp 273. The new image is available at: http://www.nasa.gov/hubble

To celebrate the 21st anniversary of the Hubble Space Telescope’s deployment into space, astronomers at the Space Telescope Science Institute in Baltimore pointed Hubble’s eye at an especially photogenic pair of interacting galaxies called Arp 273. The new image is available at: http://www.nasa.gov/hubble

“For 21 years, Hubble has profoundly changed our view of the universe, allowing us to see deep into the past while opening our eyes to the majesty and wonders around us,” NASA Administrator Charles Bolden said.”I was privileged to pilot space shuttle Discovery as it deployed Hubble. After all this time, new Hubble images still inspire awe and are a testament to the extraordinary work of the many people behind the world’s most famous observatory.”

“Hubble is America’s gift to the world,” Sen. Barbara Mikulski of Maryland said. “Its jaw-dropping images have rewritten the textbooks and inspired generations of schoolchildren to study math and science. It has been documenting the history of our universe for 21 years. Thanks to the daring of our brave astronauts, a successful servicing mission in 2009 gave Hubble new life. I look forward to Hubble’s amazing images and inspiring discoveries for years to come.”

The newly released Hubble image shows a large spiral galaxy, known as UGC 1810, with a disk that is distorted into a rose-like shape by the gravitational tidal pull of the companion galaxy below it, known as UGC 1813. A swath of blue jewel-like points across the top is the combined light from clusters of intensely bright and hot young blue stars. These massive stars glow fiercely in ultraviolet light.

The smaller, nearly edge-on companion shows distinct signs of intense star formation at its nucleus, perhaps triggered by the encounter with the companion galaxy.

Arp 273 lies in the constellation Andromeda and is roughly 300 million light-years away from Earth. The image shows a tenuous tidal bridge of material between the two galaxies that are separated from each other by tens of thousands of light-years.

A series of uncommon spiral patterns in the large galaxy are a tell-tale sign of interaction. The large, outer arm appears partially as a ring, a feature seen when interacting galaxies actually pass through one another. This suggests the smaller companion dived deep, but off-center, through UGC 1810. The inner set of spiral arms is highly warped out of the plane, with one of the arms going behind the bulge and coming back out the other side. How these two spiral patterns connect is not precisely known.

The larger galaxy in the UGC 1810 – UGC 1813 pair has a mass about five times that of the smaller galaxy. In unequal pairs such as this, the relatively rapid passage of a companion galaxy produces the lopsided or asymmetric structure in the main spiral. Also in such encounters, the starburst activity typically begins in the minor galaxies earlier than in the major galaxies. These effects could be because the smaller galaxies have consumed less of the gas present in their nuclei, from which new stars are born.

The interaction was imaged on Dec. 17, 2010, with Hubble’s Wide Field Camera 3 (WFC3). The picture is a composite of data taken with three separate filters on WFC3 that allow a broad range of wavelengths covering the ultraviolet, blue, and red portions of the spectrum.

The Hubble Space Telescope is a project of international cooperation between NASA and the European Space Agency. NASA’s Goddard Space Flight Center manages the telescope. The Space Telescope Science Institute (STScI) conducts Hubble science operations. STScI is operated for NASA by the Association of Universities for Research in Astronomy Inc. in Washington.

For image files and more information about Arp 273 and Hubble, visit: http://www.nasa.gov/hubble

For the greatest hits of Hubble videos and images, visit: http://www.nasa.gov/mission_pages/hubble/multimedia/index.html