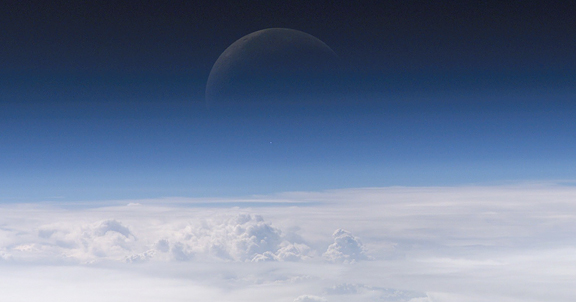 Two identical NASA spacecraft are preparing to enter a point in the universe that may eventually answer the question of how our moon was born.

Two identical NASA spacecraft are preparing to enter a point in the universe that may eventually answer the question of how our moon was born.

The spacecraft duet, called Solar Terrestrial Relations Observatory, or Stereo, are nearing a zone known as the Lagrangian points. At these points, the gravity of the Sun and Earth combine to form gravitational wells where asteroids and space dust tend to gather. The 18th-century mathematician Joseph-Louis Lagrange realized there were five such wells in the Sun-Earth system. The twin probes are about to pass through two of them, named L4 and L5.

During their journey, the spacecraft will use a wide-field-of-view telescope to look for asteroids orbiting the region. Scientists will be able to identify if a dot of light is an asteroid because it will shift its position against stars in the background as it moves in its orbit.

“These points may hold small asteroids, which could be leftovers from a Mars-sized planet that formed billions of years ago,” said Michael Kaiser, Stereo project scientist at NASA’s Goddard Space Flight Center in Greenbelt, Md. “According to Edward Belbruno and Richard Gott at Princeton University, about 4.5 billion years ago when the planets were still growing, a hypothetical world called Theia may have been nudged out of L4 or L5 by the increasing gravity of other developing planets like Venus, sending it on a collision course with Earth. The resulting impact blasted the outer layers of Theia and Earth into orbit, which eventually coalesced under their own gravity to form the moon.”

This concept is a modification of a scientific “giant impact” theory of the moon’s origin. The theory explains puzzling properties of the moon, such as its relatively small iron core. At the time of the giant impact, Theia and Earth would have been large enough to be molten, enabling heavier elements, like iron, to sink to the center to form their cores. An impact would have stripped away the outer layers of the two worlds, containing mostly lighter elements like silicon. The moon eventually formed from this material.

Stereo’s primary mission is to give three-dimensional views of space weather by observing the Sun from the two points where the spacecraft are located. Images and other data are then combined for study and analysis. Space weather produces disturbances in electromagnetic fields on Earth that can induce extreme currents in wires, disrupting power lines and causing wide-spread blackouts. It also can affect communications and navigation systems. Space weather has been recognized as causing problems with new technology since the invention of the telegraph in the 19th century.

For more information about the Stereo mission, visit: http://www.nasa.gov/stereo