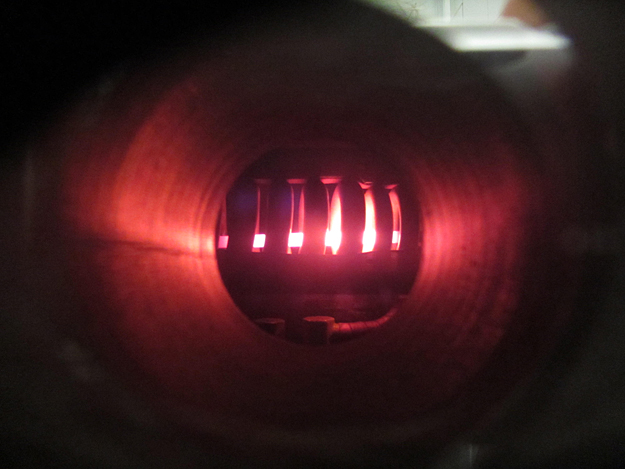 A glimpse of NTREES testing in progress in mid-2012, as a non-nuclear fuel element is heated to more than 3,200 degrees Fahrenheit while hydrogen is funneled through it. (MSFC/Emmett Given)

Advanced propulsion researchers at NASA are a step closer to solving the challenge of safely sending human explorers to Mars and other solar system destinations.

A glimpse of NTREES testing in progress in mid-2012, as a non-nuclear fuel element is heated to more than 3,200 degrees Fahrenheit while hydrogen is funneled through it. (MSFC/Emmett Given)

Advanced propulsion researchers at NASA are a step closer to solving the challenge of safely sending human explorers to Mars and other solar system destinations.

By using an innovative test facility at NASA’s Marshall Space Flight Center in Huntsville, Ala., researchers are able to use non-nuclear materials to simulate nuclear thermal rocket fuels — ones capable of propelling bold new exploration missions to the Red Planet and beyond.

The Nuclear Cryogenic Propulsion Stage team is tackling a three-year project to demonstrate the viability of nuclear propulsion system technologies. A nuclear rocket engine uses a nuclear reactor to heat hydrogen to very high temperatures, which expands through a nozzle to generate thrust. Nuclear rocket engines generate higher thrust and are more than twice as efficient as conventional chemical rocket engines.

The team recently used Marshall’s Nuclear Thermal Rocket Element Environmental Simulator, or NTREES, to perform realistic, non-nuclear testing of various materials for nuclear thermal rocket fuel elements. In an actual reactor, the fuel elements would contain uranium, but no radioactive materials are used during the NTREES tests. Among the fuel options are a graphite composite and a “cermet” composite — a blend of ceramics and metals. Both materials were investigated in previous NASA and U.S. Department of Energy research efforts.

Nuclear-powered rocket concepts are not new; the United States conducted studies and significant ground testing from 1955 to 1973 to determine the viability of nuclear propulsion systems, but ceased testing when plans for a crewed Mars mission were deferred.

The NTREES facility is designed to test fuel elements and materials in hot flowing hydrogen, reaching pressures up to 1,000 pounds per square inch and temperatures of nearly 5,000 degrees Fahrenheit — conditions that simulate space-based nuclear propulsion systems to provide baseline data critical to the research team.

“This is vital testing, helping us reduce risks and costs associated with advanced propulsion technologies and ensuring excellent performance and results as we progress toward further system development and testing,” said Mike Houts, project manager for nuclear systems at Marshall.

A first-generation nuclear cryogenic propulsion system could propel human explorers to Mars more efficiently than conventional spacecraft, reducing crews’ exposure to harmful space radiation and other effects of long-term space missions. It could also transport heavy cargo and science payloads. Further development and use of a first-generation nuclear system could also provide the foundation for developing extremely advanced propulsion technologies and systems in the future — ones that could take human crews even farther into the solar system.

Building on previous, successful research and using the NTREES facility, NASA can safely and thoroughly test simulated nuclear fuel elements of various sizes, providing important test data to support the design of a future Nuclear Cryogenic Propulsion Stage. A nuclear cryogenic upper stage — its liquid-hydrogen propellant chilled to super-cold temperatures for launch — would be designed to be safe during all mission phases and would not be started until the spacecraft had reached a safe orbit and was ready to begin its journey to a distant destination. Prior to startup in a safe orbit, the nuclear system would be cold, with no fission products generated from nuclear operations, and with radiation below significant levels.

“The information we gain using this test facility will permit engineers to design rugged, efficient fuel elements and nuclear propulsion systems,” said NASA researcher Bill Emrich, who manages the NTREES facility at Marshall. “It’s our hope that it will enable us to develop a reliable, cost-effective nuclear rocket engine in the not-too-distant future.”

The Nuclear Cryogenic Propulsion Stage project is part of the Advanced Exploration Systems program, which is managed by NASA’s Human Exploration and Operations Mission Directorate and includes participation by the U.S. Department of Energy. The program, which focuses on crew safety and mission operations in deep space, seeks to pioneer new approaches for rapidly developing prototype systems, demonstrating key capabilities and validating operational concepts for future vehicle development and human missions beyond Earth orbit.

The Marshall Center leads development of the Space Launch System for NASA. The Science & Technology Office at Marshall strives to apply advanced concepts and capabilities to the research, development and management of a broad spectrum of NASA programs, projects and activities that fall at the very intersection of science and exploration, where every discovery and achievement furthers scientific knowledge and understanding, and supports the agency’s ambitious mission to expand humanity’s reach across the solar system. The NTREES test facility is just one of numerous cutting-edge space propulsion and science research facilities housed in the state-of-the-art Propulsion Research & Development Laboratory at Marshall, contributing to development of the Space Launch System and a variety of other NASA programs and missions.