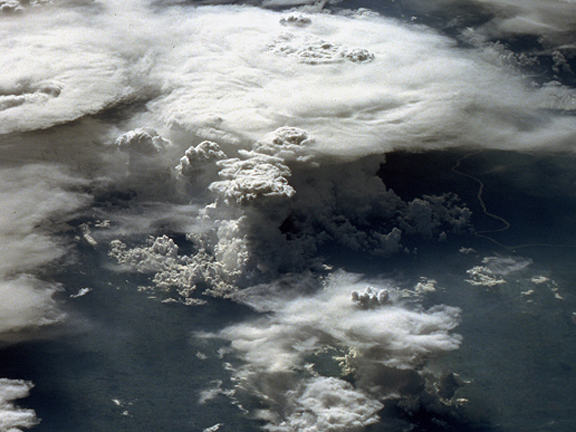 WASHINGTON — NASA is funding the development of a prototype system to provide aircraft with updates about severe storms and turbulence as they fly across remote ocean regions.

WASHINGTON — NASA is funding the development of a prototype system to provide aircraft with updates about severe storms and turbulence as they fly across remote ocean regions.

Scientists at the National Center for Atmospheric Research (NCAR) in Boulder, Colo., in partnership with colleagues at the University of Wisconsin, are developing a system that combines satellite data and computer weather models with cutting-edge artificial intelligence techniques. The goal is to identify and predict rapidly evolving storms and other potential areas of turbulence.

“Turbulence is the leading cause of injuries in commercial aviation,” said John Haynes, program manager in the Earth Science Division’s Applied Sciences Program at NASA Headquarters in Washington. “This new work to detect the likelihood of turbulence associated with oceanic storms using key space-based indicators is of crucial importance to pilots.”

The system is designed to help guide pilots away from intense weather. A variety of NASA spacecraft observations are being used in the project, including data from NASA’s Terra, Aqua, Tropical Rainfall Measuring Mission, CloudSat and CALIPSO satellites.

The prototype system will identify areas of turbulence in clear regions of the atmosphere as well as within storms. It is on track for testing next year. Pilots on selected transoceanic routes will receive real-time turbulence updates and provide feedback. When the system is finalized, it will provide pilots and ground-based controllers with text-based maps and graphical displays showing regions of likely turbulence and storms.

“Pilots currently have little weather information as they fly over remote stretches of the ocean, which is where some of the worst turbulence occurs,” said scientist John Williams, one of the project leads at NCAR. “Providing pilots with at least an approximate picture of developing storms could help guide them safely around areas of potentially severe turbulence.”

NCAR currently provides real-time maps of turbulence at various altitudes over the continental United States. Williams and his colleagues are building on this expertise to identify turbulence over oceans. The team has created global maps of clear air turbulence based on global computer weather models that include winds and other instabilities in the atmosphere. Drawing on satellite images of storms, the scientists also have created global views of the tops of storm clouds. Higher cloud tops often are associated with more intense storms, although not necessarily with turbulence.

The next step is to pinpoint areas of possible turbulence within and around intense storms. The team will study correlations between storms and turbulence over the continental United States, where weather is closely observed, and then infer patterns of turbulence for storms over oceans.

In addition to providing aircraft and ground controllers with up-to-the-minute maps of turbulence, the NCAR team is turning to an artificial intelligence technique, known as “random forests,” to provide short-term forecasts.

Random forests, which have proven useful for forecasting thunderstorms over land, consist of many decision trees that each cast a yes-or-no “vote” on crucial elements of the storm at future points in time and space. This enables scientists to forecast the movement and strength of the storm during the next few hours.

“Our goal is to give pilots a regularly updated picture of the likely storms ahead as they fly over the ocean, so they can take action to minimize turbulence and keep their aircraft out of danger,” explained NCAR scientist Cathy Kessinger, a project team member.

The NCAR project is funded by NASA’s Applied Sciences Program, which seeks to translate NASA’s investment in Earth observations into applications that address real problems. The program and its partners are working to bridge the gap between research results and operational aviation weather products in such areas as in-flight icing, convective weather, turbulence, volcanic ash and space weather.

For images related to this turbulence prototype system, visit: http://www.nasa.gov/topics/earth/features/turbulence.html