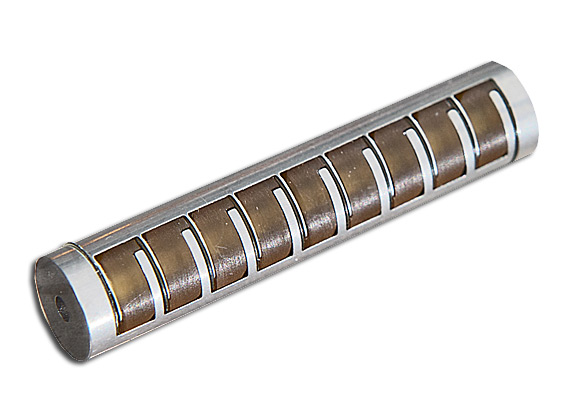 Close-up of pump being tested on a Terrier-Improved Orion sounding rocket mission from the Wallops Flight Facility in June. Credit: NASA Larger image

Close-up of pump being tested on a Terrier-Improved Orion sounding rocket mission from the Wallops Flight Facility in June. Credit: NASA Larger image

In the world of electronics, thermal control is always one of the limiting factors — particularly in space where there is no air to help cool down electronic components.

However, Jeffrey Didion, a thermal engineer at the NASA Goddard Space Flight Center in Greenbelt, Md., and Dr. Jamal Seyed-Yagoobi, a professor at the Illinois Institute of Technology in Chicago, Ill., have collaborated to develop a technology that may overcome current limitations. They have formed technical partnerships with the U.S. Air Force and National Renewable Energy Laboratory to address the thermal-control concerns.

Called electrohydrodynamic (EHD)-based thermal control, the technology promises to make it easier and more efficient to remove heat from small spaces — a particular challenge for engineers building advanced space instruments and microprocessors that could fail if the heat they generate is not removed.

“Today, higher-power computer chips are available, but they generate too much heat,” said Didion, who is leading the technology-development effort also involving Matthew Showalter, associate branch chief of Goddard’s Advanced Manufacturing Branch, and Mario Martins of Edge Space Systems, an engineering company specializing in thermal systems in Glenelg, Md. “If I can carry away more heat, engineers will be able to use higher-power components. In other words, they will be able to do more things.”

The project, a joint activity between NASA Goddard and its partners, received support from the Goddard Internal Research and Development (IRAD) program, which funds the development of promising new technologies that could advance NASA’s scientific and exploration goals. It is being demonstrated in June on a Terrier-Improved Orion sounding rocket mission, which also is flying the Small Rocket/Spacecraft Technology (SMART) platform, a microsatellite also developed at Goddard. This new microsatellite measures about 16 inches in diameter and was specifically designed to give scientific users less expensive access to space. (Read the related press release.)

The main objective of the EHD demonstration is showing that a prototype pump can withstand the extreme launch loads as the rocket lifts off and hurtles toward space. Should it survive the vibration, the technology will have achieved a major milestone in its development, Didion said. It will mean that it is at or near operational status, making it a viable technology for use on spaceflight instruments.

“Any electronic device that generates a lot of heat is going to benefit from this technology,” said Ted Swanson, assistant chief for technology for Goddard’s Mechanical Systems Division. This could include everything from sensors flown in space to those used in automobiles and aircraft.

The technology promises significant advantages over more traditional cooling techniques. Unlike current technologies used today by instrument and component developers, EHD does not rely on mechanical pumps and other moving parts. Instead, it uses electric fields to pump coolant through tiny ducts inside a thermal cold plate. From there, the waste heat is dumped onto a radiator and dispersed far from heat-sensitive circuitry that must operate within certain temperature ranges. “Its architecture, therefore, is relatively straightforward,” Didion said. Electrodes apply the voltage that pushes the coolant through the ducts.

“The advantages are many,” he added. “Without mechanical parts, the system is lighter and consumes less power, roughly half a watt. But perhaps more importantly, the system can be scaled to different sizes, from larger cold plates to microscale electronic components and lab-on-a-chip devices.”

In addition to flying the technology on the sounding rocket mission, the EHD development team will fly a prototype EHD cold plate as an experiment on the International Space Station in 2013. “This effort will demonstrate the long-term operation of an EHD thermal-control system,” Didion said.

In the meantime, the team is continuing its work to further advance EHD, Didion said. The team is working with Goddard detector engineer Timothy Miller to develop EHD pumps in microchannels that are etched onto silicon wafers. They plan to further experiment with other substrate and composite materials as well as special micro-fabrication techniques and coatings to create smaller, more robust EHD pumps.

These multifunctional devices could be used as stand-alone, off-the-shelf components ideal for quick-turnaround spacecraft — a capability that particularly interests the Air Force — or as units embedded within the walls of the electronic device.

The next step is placing the technology on circuit cards, with the ultimate goal of scaling it to the chip level where the ducts would be no larger than 100 microns (0.0039 inch), or about the width of a human hair. “The point is that you want to place the thermal-control unit closer to the source of heat,” Didion said. “This would be a lot more efficient at eliminating waste heat.”