NASA Dives Deep into the Search for Life

Off the coast of Hawaii’s Big Island and more than 3,000 feet beneath the ocean surface lie the warm, bubbling springs of a volcano — a deep-sea location that may hold lessons for the search for extraterrestrial life.
Here, NASA and its partners are blending ocean and space exploration, with a project called SUBSEA, short for Systematic Underwater Biogeochemical Science and Exploration Analog. Lessons learned in both fields will be mutually beneficial and could help design future science-focused missions across the solar system.

Saturn’s moon Enceladus and Jupiter’s moon Europa are thought to have liquid oceans and hydrothermal activity under icy crusts. Locations on Earth with key similarities to future deep-space destinations are called analog environments. SUBSEA’s target, the springs emerging from a volcano forming the next Hawaiian island, called the L?`ihi seamount, is an analog for these ocean worlds.

When NASA’s Cassini mission to Saturn discovered a plume of water erupting from beneath the icy surface of Enceladus, the characteristics of the plume told scientists what conditions might be like on the sea floor. This included the temperature, pressure and composition, and suggested the presence of hydrothermal activity. Scientists think these moons are good places to look for potential life, because water interacting with rock on their sea floors could yield chemical reactions that would make microbial metabolism possible. 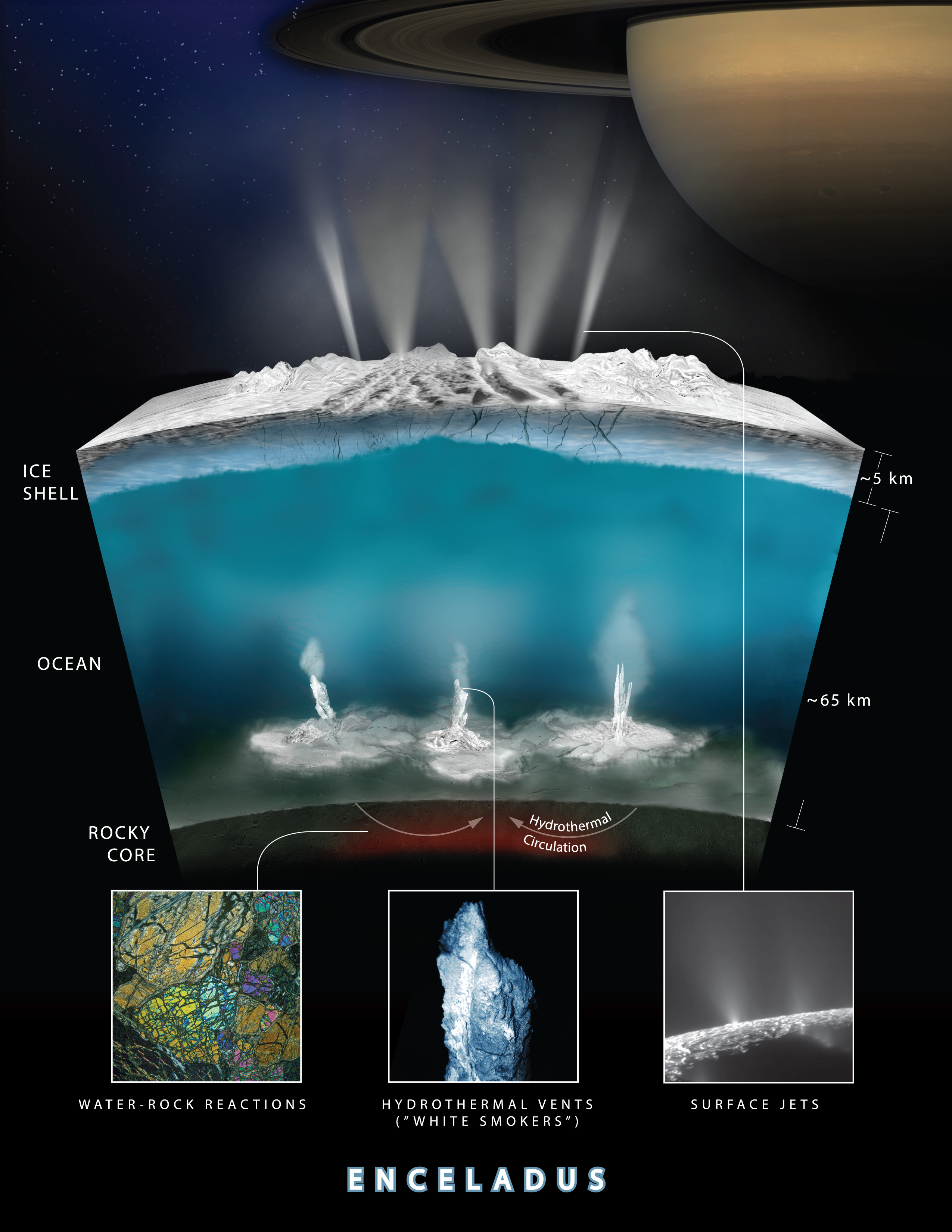 Artist rendering showing an interior cross-section of the crust of Enceladus, which shows how hydrothermal activity may be causing the plumes of water at the moon’s surface. Credits: NASA-GSFC/SVS, NASA/JPL-Caltech/Southwest Research Institute.

L?`ihi is an especially good place to test predictions about seafloor hydrothermal systems and their ability to support life. Previous research focused more on locations where tectonic plates come together, but the L?`ihi seamount involves molten magma erupting from the middle of one of these plates. This is the type of volcanic activity scientists think could be similar to seafloor volcanoes that may exist on Europa and Enceladus. The zones where plates meet may actually be too hot to provide a realistic representation of hydrothermal activity on the moons of Jupiter and Saturn.

Throughout the 2018 SUBSEA expedition aboard the vessel Nautilus, the team’s scientists from NASA, the National Oceanic and Atmospheric Administration and various academic institutions will study the conditions around L?`ihi’s seafloor springs across a range of pressures and temperatures. What they learn here will increase our understanding of the potential for conditions that could support life forms on other ocean worlds.